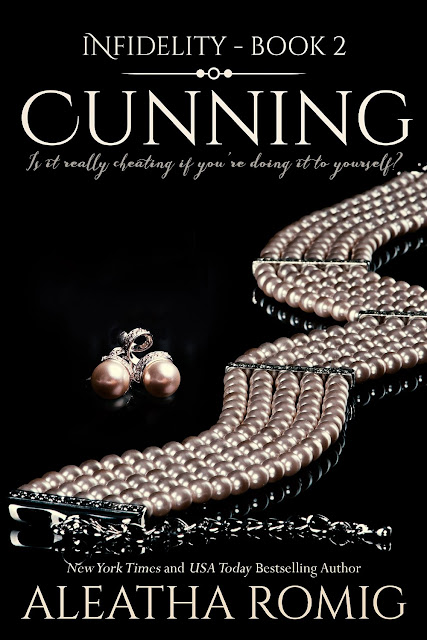 "He owns you. Whatever he tells you to do you do".

One year. No future. A past that won't go away.

Lennox "Nox" Demetri broke his own rule by making a deal. It may not have been directly with the devil, but that doesn't mean Satan himself isn't watching. Was it fate that brought Charli into his life and his bed? What will happen when rules are broken and secrets are revealed?

Alex "Charli" Collins found pleasure with Nox like she'd never known. That was before she knew his last name. Now that Infidelity is involved and the rules have changed, what will result when real life and fantasy collide?

Is it really cheating if you're doing it to yourself?

From New York Times and USA Today bestselling author Aleatha Romig comes a sexy, new dominant hero who knows what he wants and a strong-willed heroine who has plans of her own. With classic Aleatha Romig twists, turns, deceptions, and devotions, the depth of this new, epic dark romance reaches new levels and will have readers swooning one minute and screaming the next.

CUNNING is a full-length novel, 360 pages, and the second of five books in the INFIDELITY series.

Infidelity - it isn't what you think. 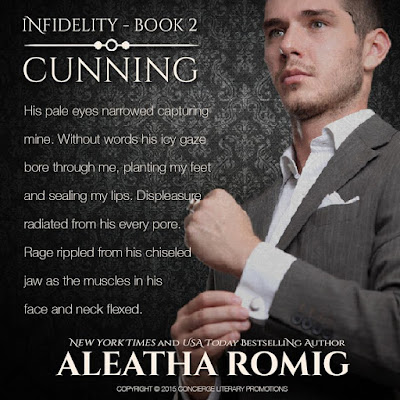 Cunning is deliciously dark and dangerous. Each page is a new experience into the world of Infidelity, the Montague Family and more! We pick up where Nox and Charli left off…and there were so many questions for me. What will their relationship be? Will she stay or go? Does she have any power or control left over her own life? But, as in the world of an Aleatha Romig novel, nothing is ever as it seems and I FLOVE it!

The history of the Montagues, the manor and more came out. Yet, as always with more being revealed, there are additional deep, dark layers to uncover. I’m jonesing for more, now!

Charli is amazing. She’s strong, determined and unyielding. She is falling head over heels in love with Nox but she also keeps herself open just enough to question things… Nox, too, is determined and unyielding to Charli, and his ways. He has rules and those rules are in place for a reason. Only time will tell how their explosive and intense love affair will play out? What will win, love or duty to family?

Ms. Romig weaves a dark and twisty tale of deals made, family secrets and angsty love unlike no other writer! Once I start one of her books, I can’t stop! I have a deep seated desire to read as quickly as I can in an attempt to figure out the twists and turns, yet at the same time slow down and enjoy the ride as I fall so in love with the characters and their lives.

Secrets and lies are everywhere…

This is the second instalment in a five-part series and the temperature is reaching scorching level! If you haven’t read the first story then you really must, as the building blocks of nuances and intrigues started there. It would be easy to become lost as each character seems to have their own agenda and the relationships between them all are getting even more complicated. Oh my gawd, the drama is real! The revelations continue but the mystery deepens as the more I learn, the more I don’t know…

Nox Demetri and Charli Collins’ connection blew away any and all barriers or objections. They were complicated people with family and pasts that were anything but serene. They each have secrets that were put aside for a perfect slice of time but reality has returned and everything has changed.

“In Del Mar I’d given him my heart. I knew that now, because today he’d broken it.”

These two characters are everything I could hope for. Nox is an alpha bad boy that can be tender and considerate one moment and an icy prick the next. How can one man be so many different things? I’m not sure but he is able to pull it off in a way that is entirely compelling. Rich and sophisticated, Nox knows how to get his way and his way is sexy, sexy, sexy….

Charli has already endured so much but betrayal and pain are not all behind her. The circumstances she finds herself in are a mix of her own doing and the actions of others, though how it all fits together is a work in progress.

The chemistry between these two is simply amazing. Every interaction, every scene, has meaning and sub-text beyond what we know to be true on the surface. The sexual tension is constant and when it erupts, oh man… It’s time to grab hold of the headboard, catch your breath and enjoy the ride!

Secrets are everywhere and each family member, friend and acquaintance could be the source of the next conflict or dramatic revelation. The author knows how to keep me on tenterhooks while, at the same time, I fully enjoy every tortured moment. Ending in a cliffhanger that was more of a thud than a big bang, I cannot wait until the next story in this series. It can’t get here quickly enough!
~ Review by Diane 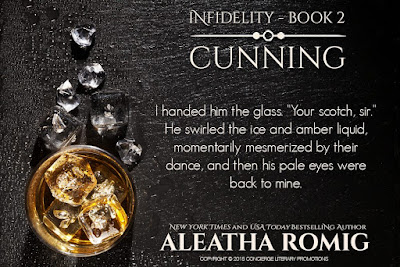 The storm of raging tension that had surrounded us since our eyes met in the bar changed. The intensity was still off the charts, but this was something different. Whatever it was affected us both. Our breathing suddenly took effort as both of our chests rose and fell.

"Take off that dress."

Nox's command echoed throughout the glass stall. I considered arguing, but common sense stopped my rebuttal. I'd already pushed him far enough. Starting at the neckline, I slowly exposed myself, inch by inch. His gaze followed the soaked material. As I revealed my breasts, my nipples hardened, and he let out a low growl. Down the dress went, exposing my tummy and red lace panties.

Shaking his head, Nox ran his finger along the edge of my panties. With his large hands now at my hips, he asked, "Did you do anything I told you to do in my note?"

"No." My honesty left a trail of vulnerability and shame.

In one quick motion, Nox ripped the lace, and the shredded panties joined my dress on the shower floor. I blinked away the water as he tipped my face upward.

"No more disobeying. Do you understand?"

I nodded—not in acknowledgment of his words, but in response to the rush from once again being in his presence. Nox electrified me in a way I'd never known, and even in the absurdity of our current situation, he was doing it again. The way he scanned my nakedness as his Adam's apple bobbed tingled my skin. 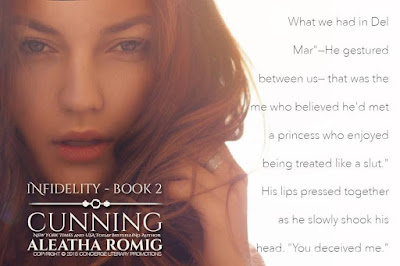 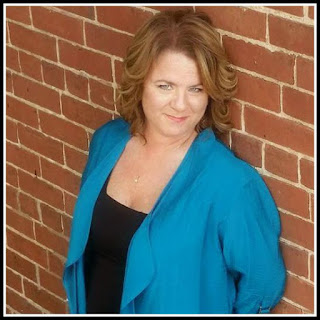 Aleatha Romig is a New York Times and USA Today bestselling author who lives in Indiana. She grew up in Mishawaka, graduated from Indiana University, and is currently living south of Indianapolis. Aleatha has raised three children with her high school sweetheart and husband of nearly thirty years. Before she became a full-time author, she worked days as a dental hygienist and spent her nights writing. Now, when she's not imagining mind-blowing twists and turns, she likes to spend her time with her family and friends. Her other pastimes include reading and creating heroes/anti-heroes who haunt your dreams!

Aleatha released her first novel, CONSEQUENCES, in August of 2011. CONSEQUENCES became a bestselling series with five novels and two companions released from 2011 through 2015. The compelling and epic story of Anthony and Claire Rawlings has graced more than half a million e-readers. Aleatha released the first of her series TALES FROM THE DARK SIDE, INSIDIOUS, in the fall of 2014. These standalone thrillers continue Aleatha's twisted style with an increase in heat. In the fall of 2015, Aleatha will move head first into the world of dark romance with the release of BETRAYAL, the first of her five novel INFIDELITY series.

Aleatha is a "Published Author's Network" member of the Romance Writers of America and represented by Danielle Egan-Miller of Browne & Miller Literary Associates.