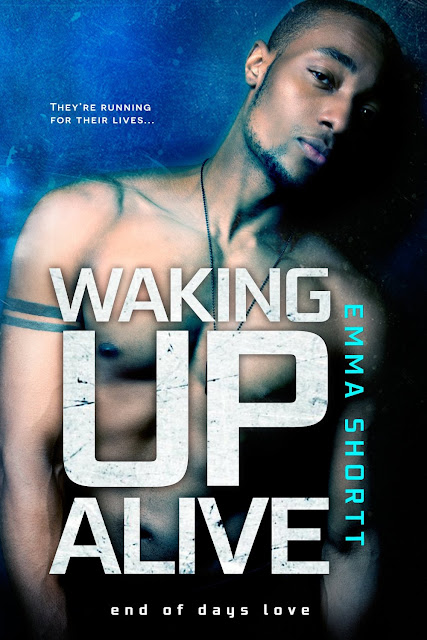 They’re running for their lives…

After surviving the zombie apocalypse for two years, Tye LeBow never expected to be saved from a hungry gang of zombies by a geek with a bad attitude and a penchant for explosives. Tye can’t quite work out why scientist Polly Parker saved him. She doesn’t want his protection, and she certainly doesn’t want his company. But Tye has no intention of leaving the beguiling geek behind.

Polly doesn’t want to leave her home, but when the wakers begin to show signs of a burgeoning intelligence, heading south is the only option. With a car packed full of homemade explosives, and Tye’s very large axe, they are ready for the road trip of their lives.

Bombs and blades aren’t the only keys to survival–they’ll need to rely on each other, in a way that neither could have imagined…

This was so, so, so close to five stars. I devoured this book, one sitting. It was not an overly short book either. May we please take a moment to collectively sigh over the sexy wonder that is Tye? Thank you. He was everything a good alpha hero should be. Strong. Sexy. Compassionate. Oh, and actually a hero. Saving the world one dead zombie at a time.

When we meet him he's traveling towards the hopeful safety of a survivor camp with a woman friend. Actually a woman, who is truthfully only a friend. Want to see me respect a man? Show me one who can respect a woman with no promise of sex. Boom. Done. He's fiercely loyal to Jackson, and respects her as a woman, a fighter, and a survivor. May we swoon?

Of course things are not allowed to go as planned so when a wrench is thrown into their plans, Tye is separated from Jackson and meets Polly. Nerdy, awkward, shy, pretty in her own proper way, Polly. She is not a fighter, but that makes her no less a survivor. She has maintained a life for herself despite the odds, by sheer clever ingenuity. It's so easy to admire her, and to hope, given the situation, there really would be a place in the world for someone who can only fight with their brains. She has her reasons to distrust Tye, and despite his attraction to her, he is determined to win her over, to prove that he is not a threat to her.

This is where most authors still push the alpha on the poor scared woman. Practically forcing her to accept him and deal with her trauma in a few intense scenes excused from their abruptness by sheer sexiness. Not this author. She takes you on a slow ride of a budding friendship, a blossoming respect. Don't worry, there is nothing slow about the reading of this book. There is enough suspense and trouble going on in the background without adding to it with a problematic relationship. It was an edge of the seat kind of ride, the kind that after I finished had me looking both ways when I let my dog out at night. Not too scary, but definitely well done.

The end is what threw me a little. I loved the plot and the development. I loved where she took the ending, I just felt like it dragged on a bit timewise. It took place in the book world over a course of months and that seemed excessive. Maybe realistic, but excessive for reading purposes. Still, there was not a magical, easy way out, and you are left genuinely wondering throughout if it's actually going to turn out okay. Some of the problems aren't correctable and you get an honest and heartwarming depicting of how the characters react to this.

The final bit left me a little unsure as well. "Red" has so many problems adjusting to her reclaimed life that I felt so many others would find it difficult or impossible, so it left me wondering just how feasible their plan was. This wasn't discussed, and I felt it should be.

Overall, I loved this read, and I'm planning to go back and read the first one. I can only hope there will be a third one. There absolutely should be!
~ Review by George