Release Blitz - What Doesn't Destroy Us by M N Forgy

When Dani's sheltered life is turned upside down by her mother's secrets, she finds protection with her estranged outlaw father. Against all warnings, she falls for bad boy biker, Shadow. He is beast and beauty sealed in a leather cut with a gun holster. Can Dani learn to live within the Club rules? Is she more like her father than she could imagine?

Shadow has grown up among drug addicts, whores and murderers. The only family he's ever trusted has been the Devil's Dust motorcycle club. He will do anything for a brother; even kill. In fact, killing is so easy, he's made a career of it. His one regret is not being able to kill his own worthless mother. When Dani shows up with her provocative temper and innocent charm, Shadow begins to question his violent lifestyle. But can he trust her with his demons?

Will Dani and Shadow let family ties destroy them? 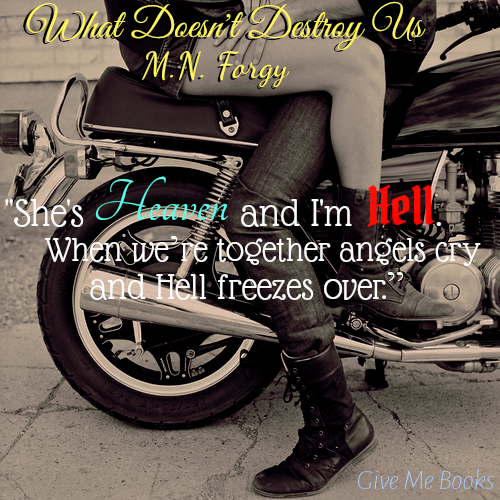 2014 has been an amazing year for debut authors, What Doesn't Destroy us by M.N. Forgy is this author's first book, and what a book it is. With so many biker books out there right now it's really hard to find one that's original and holds my attention. This one sucked me in right from the first chapter.

Dani and her mother are on the run from her mother's crazy ex. They look for safe haven in the protection of the Devil's Dust MC. Dani is immediately taken with the club's sergeant-at-arms, Shadow.

Shadow's not a good guy, he knows he's definitely good enough for young and innocent Dani. Plus she's the daughter of the pres and that makes her hands off automatically. But the pull between these two is too intense to deny. With both of their pasts being unleashed, can this relationship even get off the ground?

This book had a crazy good story line and an ending that left me reeling. Seriously, my God! Way to leave a chick hanging. I'm very impressed with Forgy's debut and am officially a fan. Secrets, lies, action, suspense and hot and sexy love scenes make this one a winner in my book. Looking forward to the next one because I need some damn answers!
~ Review by Erin 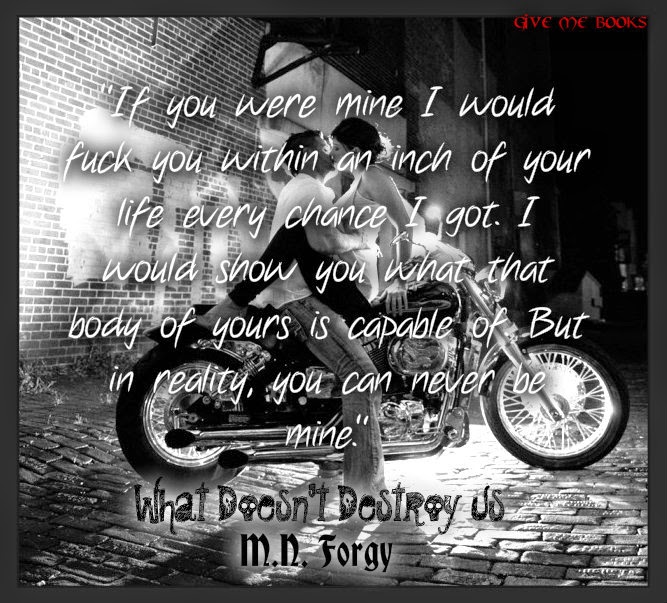 Oh my goodness, I NEED the next book NOW! That ending, I didn't see coming at all and was totally surprised and shocked. I liked that this book was a fast read, meaning page turner. I couldn't put it down and that’s always a plus for me when it comes to a book.

What Doesn’t Destroy Us is M.N. Forgy’s first book and it was GOOD. Honestly I didn't know who she was or that she was a new author until I looked on Goodreads. You never would have guessed that this story is her first. I have a huge thing for MC’s so I just had to read this book and I’m glad I did. I look forward to the next book. 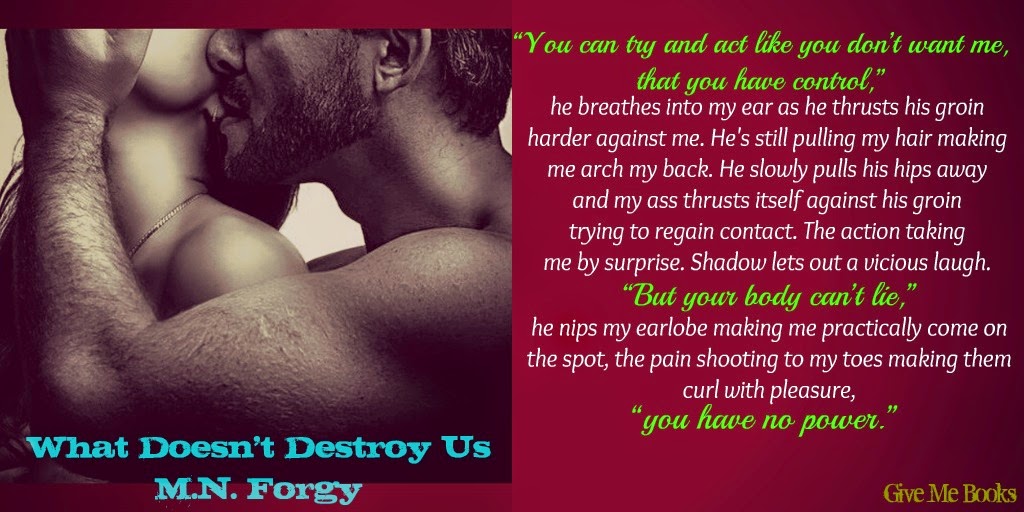 M.N. Forgy was raised in Missouri where she still lives with her family. She's a soccer mom by day and a saucy writer by night. M.N. Forgy started writing at a young age but never took it seriously until years later, as a stay-at-home mom, she opened her laptop and started writing again. As a role model for her children, she felt she couldn't live with the "what if" anymore and finally took a chance on her character's story. So, with her glass of wine in hand and a stray Barbie sharing her seat, she continues to create and please her fans. 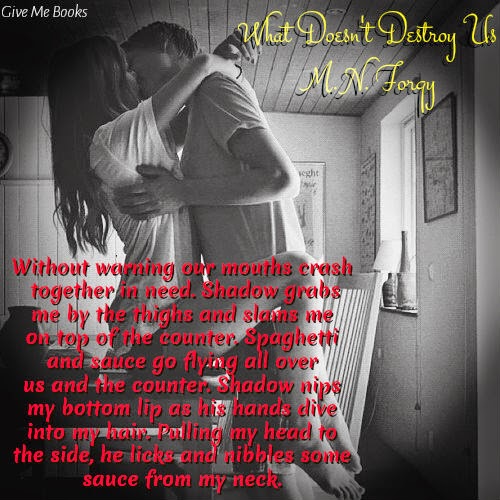 a Rafflecopter giveaway
Posted by Give Me Books at 3:52 pm