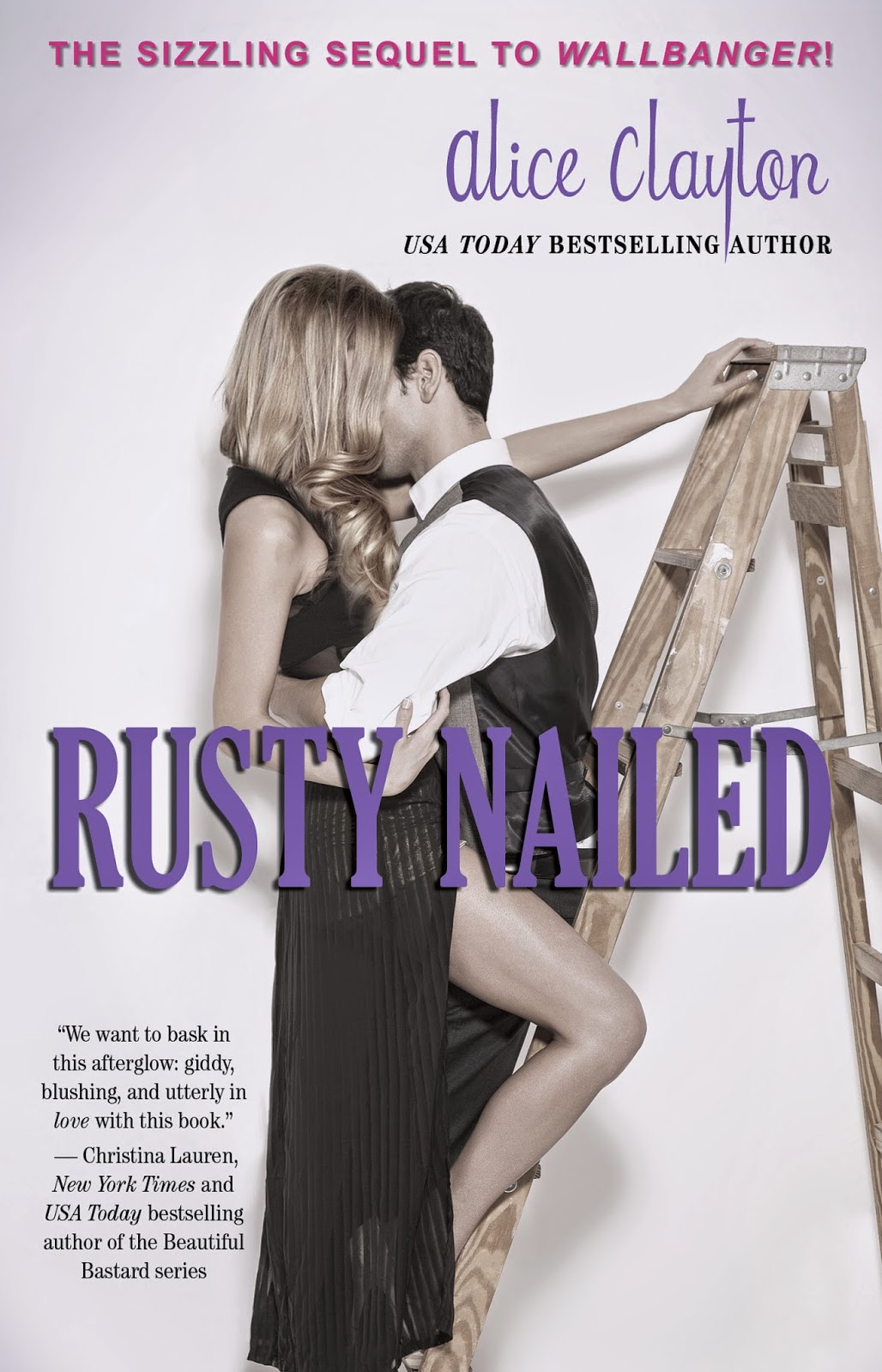 In this sequel to Wallbanger, the second book in the Cocktail series, fan favorites Caroline and Simon negotiate the rollercoaster of their new relationship while house-sitting in San Francisco.

Playing house was never so much fun—or so confusing. With her boss on her honeymoon, Caroline’s working crazy long hours to keep the interior design company running—especially since she’s also the lead designer for the renovation of a gorgeous old hotel on Sausalito. So with her hotshot photographer boyfriend gallivanting all over the world for his job, she and Simon are heavy-duty into “absence makes the heart grow fonder” mode. Neither has any complaints about the great reunion sex, though! Then Simon decides he’s tired of so much travelling, and he’s suddenly home more. A lot more. And wanting Caroline home more, too. Though their friends’ romantic lives provide plenty of welcome distraction, eventually Caroline and Simon have to sort their relationship out. Neither wants “out of sight, out of mind,” but can they create their own happy mid-ground cliché?

I want a Wallbanger. Like, yesterday. I’m not picky though, so I’ll take Simon OR the drink. Preferably Simon though. Oh Wallbanger, I’m so happy to see you and Nightie Girl again because I LOVE funny books. Give me humour over angst any day of the week. And Rusty Nailed had humour. And one of my other favourite things... Clive the cat. Oh ok, and sex. I loved the sex too. Obviously.
Caroline Reynolds has locked down the Wallbanger. It’s been a year of in-and-out love (snicker) as Simon Parker flies around the world on photography assignments and she makes the most of their time apart by commandeering the bed. He always comes home to her though and she loves that – and him. Work is keeping her busy with her boss on an extended honeymoon, leaving her in charge of the office and an enviable and time-consuming new project. But then suddenly, Simon is home more. A lot more. As in, all the time. Caroline just doesn’t have the time to be around as much as he’d like her to be and she’s starting to feel the strain. With their distracting friends, their crazy cat and their ever-changing relationship on her mind, can Caroline find the balance she needs to get her happily ever after?
I’m still chuckling over this book. No lie, I remember a funny line or awkward situation and I start giggling. It’s great. I love that – a book that stays with you for days after you finish it. Especially when it’s a good stays-with-you and not an “Oh God, why????” stays-with-you. As much as I enjoyed Wallbanger, I loved Rusty Nailed even more. The chemistry and dynamics between Caroline and Simon were still there, hotter than ever, and the change in their relationship made for some steamy, sexy moments. There were some genuine heartfelt moments among the hilarity too, as Simon simultaneously learns to let go of and embrace the past and Caroline realises what she wants from her future. My favourite elements from the first books made an appearance – Clive’s life-like presence and his shenanigans, the hilarious relationship Caroline has with her nutso friends (Sophia and Neil, sigh), the fun texts between the characters – but it never felt like rehashing old territory. The prologue, which chronicles the year between the two books, and the final chapter were my equal favourite parts of this book. Along with everything else. I honestly can’t think of a single thing I didn’t like about Rusty Nailed. Well, except for the fact that it ended...and I’m still waiting for my own Wallbanger.
This is the second book in the Cocktail series, no cliffhanger.
~ Review by Beth

4 1/2 O-tastic Stars
Woohoo, Simon Wallbanger is back! If you haven't read book 1 yet, get on that stat! You're missing out on a fun and sexy read! Rusty Nailed was a great addition to this series. We pick up right where Wallbanger left off with Caroline and Simon settling into their relationship. I have to say this one was way sexier than the first book, lots of wallbanging going on.

After her boss gets married and goes on an extended honeymoon, Caroline is left in charge of the design firm. Simon an award winning, world traveling photographer is still snapping breathtaking snapshots around the globe. Their relationship has been pretty smooth sailing since he found Caroline's O.

Of course their besties who have coupled off are all back in this much anticipated sequel but there's trouble in paradise for one of the pairs. Which of course leads to some uproarious antics and LOL-ing by the reader.

I loved having a front row seat and watching Caroline and Simon's blossoming romance. These two are one of my favorite book couples. Of course what would Rusty Nailed be without Clive the crazy cat? He gets to have a little adventure of his own in this book. The epilogue is priceless! Thank goodness there's only a short wait for the next book in this series. You'll get to meet Viv, the heroine in Screwdrivered, in Rusty Nailed.

Alice Clayton has another bonafide hit with this book. Hit that One-Click button and let the laughter ensue!
~ Review by Erin 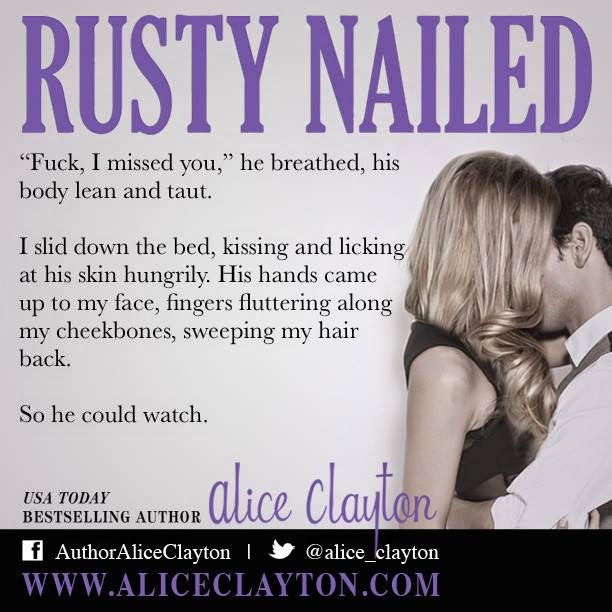 Novelist Alice Clayton makes her home in St. Louis where she enjoys gardening but not weeding, baking but not cleaning up after, and is trying desperately to get her long-time boyfriend to make her an honest woman–and please buy her a Bernese Mountain dog.

After working for years in the cosmetics industry as a makeup artist, esthetician, and educator, Alice picked up a pen (read laptop) for the first time at 33 to begin a new career: author. Having never written anything longer than a grocery list, she soon found writing to be the creative outlet she’d been missing since walking away from the theater 10 years before.

She has a great time combining her love of storytelling with a sense of silly, and she was shocked and awed to be nominated for a Goodreads Author award in 2010 for her debut novels, the first two installments of The Redhead Series–The Unidentified Redhead and The Redhead Revealed. Her latest novel Wallbanger is a return to her trademark comedic erotica, or funny smut, that Alice has become known for.

Additionally, Alice loves spending time with her besties on Not Your Mother’s Podcast (check them out on iTunes) and has recently partnered with actor Greg Grunberg, blogger Brittany Gibbons, and actress Keili Lefkovitz on a new travel show that will begin filming in January. 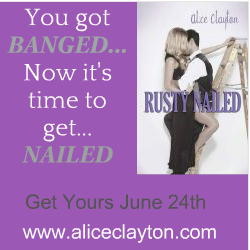