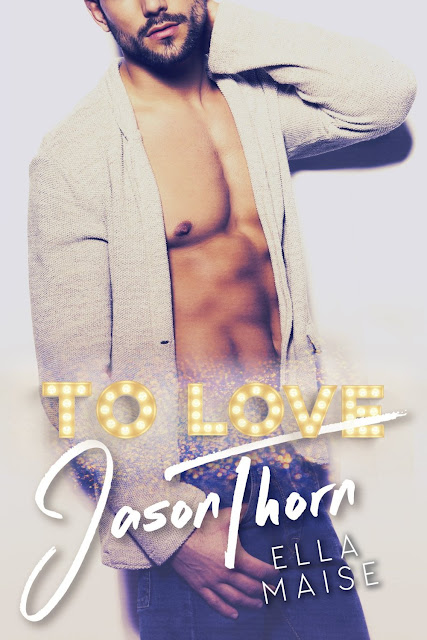 Oh, how stupidly in love with that boy I was. He was the first boy that made me blush, my first official crush. Sounds beautiful so far, right? That excitement that bubbles up inside you, those famous butterflies you feel for the very first time—he was the reason for them all. But, you only get to live in that fairytale world until they crush your hopes and dreams and then stomp on your heart for good measure. And boy did he crush my little heart into pieces.

After the stomping part he became the boy I did my best to stay away from—and let me tell you, it was pretty hard to do when he slept in the room right across from mine.

When tragedy struck his family and they moved away, I was ready to forget he ever existed.

Now he is a movie star, the one who makes women of all ages go into a screaming frenzy, the one who makes everyone swoon with that dimpled smile of his. Do you think that’s dreamy? I certainly don’t think so. How about me coming face to face with him? Nope still not dreamy. Not when I can’t even manage to look him in the eye.

Me? I’m Olive, a new writer. Actually, I’m THE writer of the book that inspired the movie he is about to star in on the big screen. As of late, I am also referred to as the oh-so-very-lucky girl who is about to become the wife of Jason Thorn.

Maybe you’re thinking yet again that this is all so dreamy? Nope, nothing dreamy going on here. Not even close. 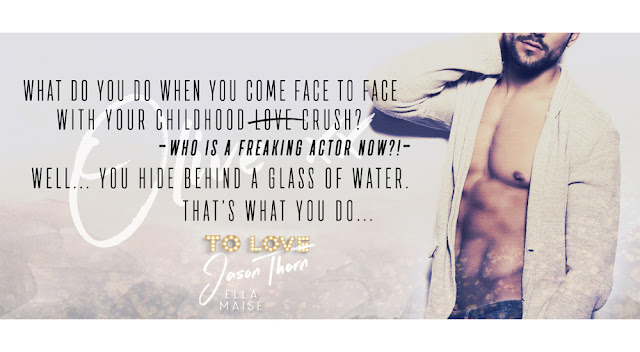 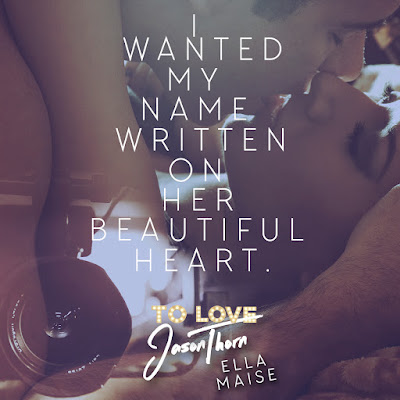 Olive Taylor (which, by the way, is practically the cutest name I've ever heard) met Jason Thorn as her neighbor and brother's best friend when she was just six years old. It was love at first sight for sweet little Olive who gave Jason her whole heart in that way you only do for your first love. And so, when Jason shatters her heart as a teenager, it is complete emotional devastation for poor Olive.

Jason Thorn came from a troubled home. The kindness and care that the Taylors showed him meant more to him than anything else in the world. He loved the time he spent with them, including little Olive who he protected and cared for like a precious thing. When a family tragedy ends with Jason moving away, they are all a little heartbroken—even Olive who also recognized the chance to move on from her first love.

When their paths cross years later, a spark is ignited. Jason is cast as the lead role in the screen adaptation of Olive's hit novel. Jason recognizes Olive almost immediately and a new—grown up—relationship is formed.

I loved...this book. The whole thing. It all worked for me. I loved that Jason never overlooked Olive when she was a child. He was kind to her, loving even, protecting her from the world and sometimes even the harsh words of her older brother. I love how this wasn't set up as a "he never knew she existed book". He loved her all along—just in a different way. Even when he broke her heart—it wasn't necessarily mean spirited. It was just that Olive felt so much, and her tender heart was so easily bruised.

I loved how lighthearted this whole thing felt. I laughed out loud so many times. Olive is quirky and awkward and completely loveable—both as a child and as an adult. Jason is famous and troubled, but hasn't forgotten where he came from. He hasn't forgotten Olive, and her reappearance in her life grounds him, reminds him that he has roots. As their story unfolds and his feelings toward Olive deepen, there are some breathtaking moments. I love those moments where you recognize that something big is happening and it feels a little bit like you might be falling in love yourself.

Even the minor niggling complaint I had for a while was resolved sweetly and neatly in the end. I wanted more of Olive's family. I questioned how (or why) they would allow her life to unfold the way it did without running some interference. However, when they did re-surface, it was emotional and sweet enough to make my eyes well up and my breath catch. I love her family. Even her oft misguided, always hilarious older brother.

Engagingly written and packed full of sweet, quirky humor, this book is completely adorable! So swoony and sexy in a way that I wasn't fully expecting, but set my heart to racing nonetheless! I can't stop smiling. My face hurts! If you're looking for something low on the angst and heavy on the goofy grins, To Love Jason Thorn will not disappoint!
~ Review by Shelly

Oh, this adorable book! Can I read it again? It's okay to want to turn around and experience something so sweet and sexy and fun all over again, right? Of course it is.

Little Olive Taylor has loved Jason Thorn forever. Well, at least since the day she met him—and he practically moved into her house. Sure, she was just a kid, but the older boy gave her butterflies…until the day he broke her young heart—and then had to leave her behind.

Now Jason is a movie star, the man everyone swoons over. And Olive? Well, Olive’s best selling novel is going to be made into a movie—with Jason in the lead role. Coming face-to-face with Jason after he gave her her first heartbreak is hard enough…now Olive’s about to become his wife.

Jason Thorn, I'm totally with Lucy on this one. I want to lick your dimple. And kiss your exquisite mouth. Probably a few other things too, but let's not go there, okay? I'll stick to the basics… This book is a ton of delicious fun. It's got humor, swoon, romance, intrigue and a memorable-for-not-being-memorable scene that—well, I'd never forget it, if it were me…

To Love Jason Thorn is all lovely brother’s best friend romance and dream-come-true love, wrapped up in steam and smolder (and sigh-worthy kisses). There's not much—if anything—I would change about this well-written and clever little book, because it was pretty close to perfect. Poor, sweet little Olive was classic—I loved how she compared their story to a novel, because yup, when Ella Maise set this one up, I had the same thought…if this was a book (duh, Beth, it IS!), this would totally happen.

And dear God, fine-as-fuck Jason. The bad boy that wasn't so bad after all. He's enough to make a girl believe in happily ever after and that falling in love young—and with a movie star—is a legitimate possibility. PLEASE, LET IT BE A POSSIBILITY!

I really hope there'll be more of these types of books from Ms. Maise, a new-to-me author. I certainly wouldn't say no to more on Lucy and Jameson, for example… Can we make that happen?! If not, I guess I'll just stick with re-reading this little gem instead.
~ Review by Beth 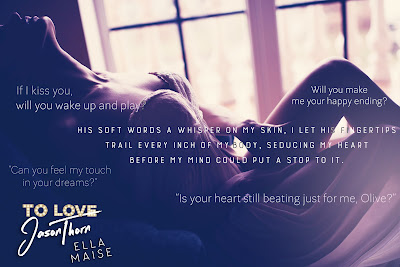 Her gaze dropped down to my chest and her eyes slightly widened as if she was just realizing there was a half-naked man right in front of her. When her eyes started to trail lower, my skin prickled and I had to fight with my body to not react to her beautiful wandering eyes. “I…I should take a shower first so I’ll just…” Her eyes jumped between my eyes and collarbone. “I’ll head to the other room and grab…my things. I’ll be right back.” She patted my arm and ran away.

Chuckling, I got into bed.

Twenty minutes had passed when she finally put her knee on the right side of the bed and climbed up next to me. There was too much space between our bodies for us to ever come in contact, but instead of lying on the very edge of the bed like I was doing, she quietly got under the covers and settled in the middle.

Maybe she just wanted to lay in the middle so we could share the covers without having to pull on them? Or maybe she was a turner, and to avoid tumbling down, she needed to fall asleep far away from the edge? Either way, I would stay on my side so it was okay.

Everything would be fine.

Another ten minutes passed and thanks to Olive’s tossing and turning, I was still wide awake.

Every single time she turned, moved, fluffed her pillow, or quietly sighed, my body got a reminder of her presence and of course acted accordingly. Hell, even her breathing was starting to get to me.

Groaning, I turned to my right to see her back facing me.

“Jas—” she started to whisper, but before she could finish my name, I reached out, splayed my hand on her stomach—thank god she was at least wearing something—and pulled her back against my chest.

She gasped and her body stilled. For a moment, I didn’t know what I should do with my hand, but then I decided to rest my palm on the bed, still keeping my arm against her stomach, caging her in. At least this way she would stop tossing and turning and we would finally go to sleep.

“Jason? Are you sleeping?” she whispered, not turning her head.

“What do you think?” I muttered.

My chest still cushioning her back, I pulled my hips a few inches back—just to make sure she wouldn’t feel anything she wasn’t supposed to feel—and gave her body a gentle tug with my arm.

A few minutes later, just when I was about to fall asleep, she started to wiggle her bottom. The little minx managed to rest her ass right above my dick. One wrong move and my already raging dick would have been resting right against her round, shapely ass—not that I had spent much time looking at it…

While her breathing had deepened shortly after she’d made sure her ass was perfectly placed to torture me, it took me hours to fall asleep, battling with the urge to move forward, just a few inches, just to let my dick cop a feel. 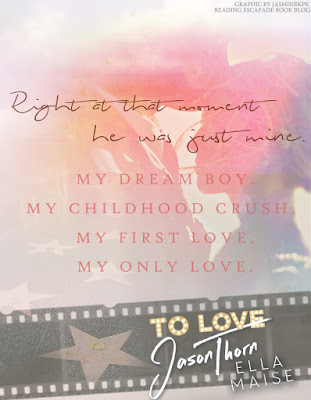 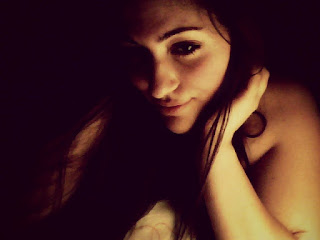 I'm an avid reader. Therefore, a big dreamer. I love nothing more than to escape real life to find those very few magical moments in a book. I love how it has the power of stealing your worries away, putting a smile on your face, and of course sometimes making you crush on fictional characters. If I can manage to do even one of those things for a reader, I will be a happy writer.

I can't even begin to describe how exciting it is to give life to new characters and fall for them. It's a different kind of addiction.

I'm still searching for my own happy ending. Until that happens, I'll live vicariously through my own characters. 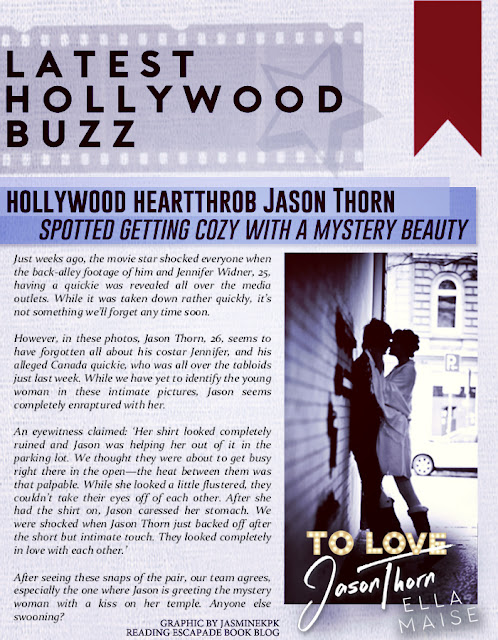