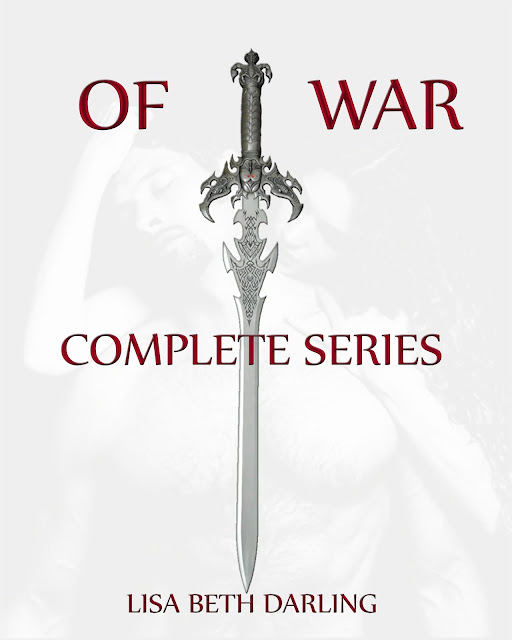 Fall in Love with Ares God of War and Alena MacLeod. Together they Rock the World from the Heights of Olympus to the Celtic Moors.

In The Heart of War, Magdalena MacLeod has been on the run from Cernunnos, Great Horned God, for 200 years when she mysteriously washes ashore on secluded isle of the God of War. When the Olympians discover her presence on Ares' island, they send Apollo to the island to retrieve her while Ares is away. Diplomatically winding her way out of immediately going to Olympus and having nowhere to turn, Alena strikes a bargain with the God of War--her virginity for his protection.

Ares sees a sweeter deal; her in his bed and himself back in his rightful place on Olympus even if it means turning Alena over to Zeus. After Alena proves herself to Ares in battle and his bed, the God of War must choose between his Divinely Dysfunctional Family, his pride, and Alena.

Child of War-A God is Born Ares and Alena have settled on snowy Olympus to await the birth of their son, Raven. Before Raven is even born, Zeus outwardly despises him for his Fey blood. With only one to keep his family safe from his father, Zeus the God of Gods, Ares enters into a blood pact that could cost the God of War everything he holds dear.

After a harrowing birth wherein mother and son are nearly lost to Ares, it quickly becomes clear that Raven may be the most powerful and cunning Olympian ever born despite his muddled bloodline. Zeus, Apollo, and Aphrodite plot against the new family by carefully planting the seeds of rage and doubt in Ravens' mind, they turn son against mother. It appears as though Cernunnos' prophecy is coming to life as Raven grows to be a very angry young man.

As the true past between the Olympians and Celts is revealed, the battle for Ravens' mind and the ultimate control of Olympus begins. Before it's over, the white snows of Olympus will run red with blood.

Child of War-Rising Son sees Raven on the verge of manhood as his rampage continues and he begins the difficult path to Acceptance by his fellow Olympians. Out to prove he's as good, if not better than, any of them he bests the Trials set before him by Hades and Poseidon. This isn't enough for him, in his quest to prove to his Father, Ares, that he is an Olympian Raven preys upon the Mortals below Olympus in a time of great weakness. Enlisting the aid of his Uncle Apollo and settling for nothing less than utter Chaos, together they push the Mortals to pure anarchy. Ready to conquer the remainder of his Trials so he may take his place at the Counsel Table, and bring Ares the glory Cernunnos once prophesized, only one thing stands in his way; the night his Mother fell down the stairs.

Apollo, ever the Man Behind the Curtain, pulls Raven's strings like a true puppet master. It's far too late when Raven realizes all he's done in hopes of pleasing his Father actually makes Ares look guilty of destroying the Mortal World. A little Chaos and a little Anarchy aren't enough for the Golden God, in his on-going quest to destroy Ares, Apollo sets a plague loose upon the embroiled Earth. By the time the Olympians discover what's going on twenty million people are dead with the number multiplying exponentially every day.

Women of War gives us a brief reprieve from the death and darkness as we journey backward in time spanning four generations of women in Alena's family. From her great-grandmother, Shar Draiocht the last known Queen of the Dark Kingdom to her tortured daughter Morrowind, to Maven Alena's free-spirited mother and through the lonely life of Alena MacLeod ending where The Heart of War begins with the night Alena washes up on Ares' shore. With intensity, lust, fear, and strength these Women of War make their way in the world revealing the hidden truths of the past and Ares true connection to his beloved Wife, Alena.

Kingdoms of War, the OF WAR Series Finale, sees nearly four billion souls lost to the ravages of Anarchy and the dreaded disease Major Falls. Ares, Athena, and Raven journey the Mortal World vainly reaching for a sliver of what was only to discover what will be. From the fiery wreckage a new world is slowly arising one where the descendants of Olympians, Celts, Dark Fae, and all manner of Magickal Being will rule.

Ares and Athena wander the world, hoping to curtail further damage by obliterating weapons of mass destruction the Wolf inside the God of War slowly succumbs to Major Falls. A rabid God of War is not a pretty sight. Soon it becomes clear that Ares may not live to see the glory of Olympus restored.

By the time Ares' fevered body is brought to Olympus, Apollo's descent into madness is utterly complete. The Gold God is quite insane as he expertly kills off the members of his Divinely Dysfunctional Family. Yet, Alena's greatest nemesis holds the key to saving Ares' life. The price is high and, should she pay it, Alena can't be sure Ares would ever be able to forgive her. 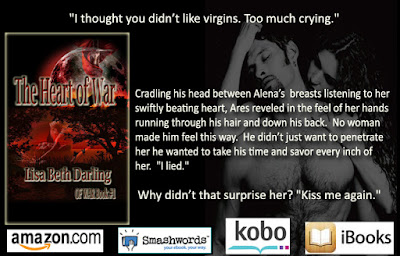 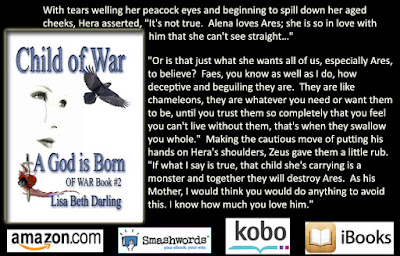 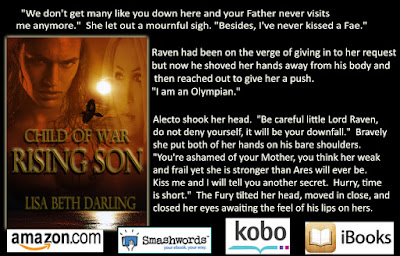 
Ares was in a foul mood and suffering from a splitting headache when he arrived back on the island with Alena. "Go inside." He said gruffly and pointed toward the cliffs and the cave above.

She didn't want to leave him here, alone, on the beach but it didn't appear Ares was wanted company, not hers anyway. In the face of his Father and the other Olympians, Ares stood tall and strong. He'd come to her aid just as he said he would and kept his promise. Alena was stunned. When Zeus said he would return Ares' property and his station to him, she felt sure the God of War would sell her down the river. She wanted to thank him, wanted to ask why he had done it but she held her tongue. "Yes, my Lord." Hiking up the hem of the dress, she turned to make her way up the long strange stairs leading from the beach to the top of the cliff. With a heavy heart, she walked a few steps until she got to the base of the stairs and there she turned around. Ares was sitting on the sand facing the water and the setting sun. He had thrown off the belt with the heavy sword and his thick leather vest; they were in the sand next to him as he sat there with his head down in his hands. She could not leave him there. Quietly coming up behind him, Alena sat down, wrapped one arm over his left shoulder and the other under his right lacing her fingers together and pulling him backward. Alena expected him to balk or to fight but, instead, Ares settled backward into her arms, rested his head in the crook between her neck and shoulder as he let out an exhausted sigh. "I'm sorry I'm so much trouble, my Lord." She whispered as she nestled her face into his hair.

Letting the softness of her touch and the warmth of her body comfort him, Ares closed his eyes and drew in the peaceful shelter she offered. "It's not you. It's Them."

The Olympians were quite the Divinely Dysfunctional Family. Alena had never seen or heard so much bitter bickering from one clan. If that was her Family, she might be damn happy that she lived in Exile on a beautiful island such as this. "They're awful." She whispered in his ear careful not to let any prying ears overhear. Ares gave out a deep chuckle and then another sigh as his hand rose up to caress her arm. She thought of how brave, how daring, and even dashing, Ares had been as he stood there telling all of them they could not have her. When she listened to him speak of Artemis, Alena nearly cried. Then she had been stunned into silence having expected the God of War to hand her over, maybe not with ease but readily enough, in return for his crown and scepter. "Thank you for keeping your promise."

"You expected this chauvinistic pig to do less." Ares mused still with his eyes closed. "Everyone does." 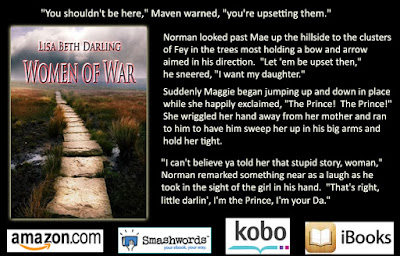 FIND ALL BOOKS IN THE SERIES
AT THE FOLLOWING E-TAILERS

It was in the 4th grade when Lisa discovered she was a naturally gifted writer. The teacher asked the class to pen a story about a baby bird's first flight and read them to the class. Putting pencil to paper, Lisa was instantly whisked away by a force she couldn't explain. When they were finished, all of the children read their happy stories to the class. Not Lisa. She got up and told of how the baby bird flew too high, hit a plane, crashed to the ground and died. She told of how the mama bird and daddy bird cried of how even God was upset sending the rains pouring from the sky. The class was speechless when she finished all they could do was stare at her. The teacher kept her after class told her the story was very good but it was different from the others. She asked Lisa if she'd ever heard of Icarus and did she base her story on him. Lisa had yet to encounter Greek Mythology or hear a whisper of Icarus. As Lisa left the classroom the teacher again told her how good the story was but suggested she might want to write something happier next time. When Lisa asked her teacher "why" she had no answer. Luckily for us, Lisa never took that teacher's advice.

Today she brings us stories rich with romance along with the trials and tribulations that make up the life in which we live.

Lisa Beth Darling is 49 years-old, lives in her hometown of New London, CT with her husband of nearly 30 years, Roy. She is the author of more than fifteen novels along with several short stories and non-fiction books. 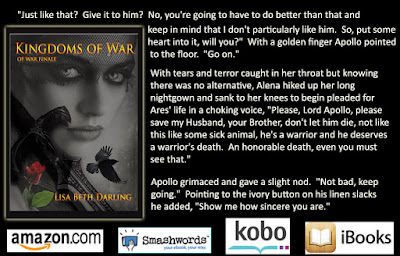 a Rafflecopter giveaway
Posted by Give Me Books at 12:57 pm