Review - Breaking It All by Kati Wilde 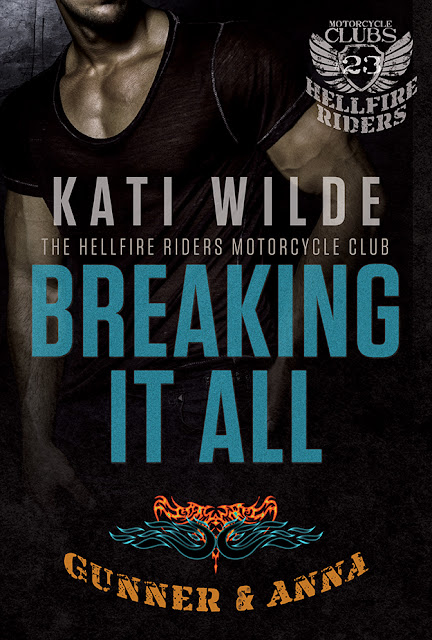 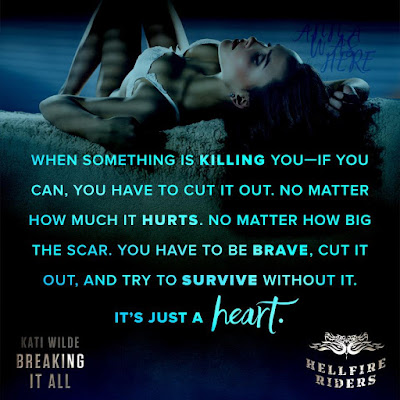 ANNA
When Zach “Gunner” Cooper rode into my life ten years ago, he turned me inside out with a single kiss. Then he discovered who I am—his best friend’s little sister—and he never touched me again.

Now he’s the Hellfire Riders’ sergeant at arms—sexy, dangerous, and still the only man who’s ever set my body on fire. I’ve tried to stop wanting him. I’ve tried and tried. But this time…I have to get over him. Because everything I feel for him is killing me inside.

GUNNER
For ten years, I’ve pretended that I don’t think of Anna Wall as anything other than our enforcer’s little sister. Because the blood running through my veins is poison, and getting close to Anna will only destroy her.

But when her brother goes missing and the past comes calling, and a threat to her life waits at her front door…there’s no pretending anymore. She’s mine. She’ll always be mine.

And I’ll do anything to break through Anna’s defenses and make her believe it.

**This is the seventh story in the Hellfire Riders MC series but can stand alone. No cliffhangers, will have a HEA.** 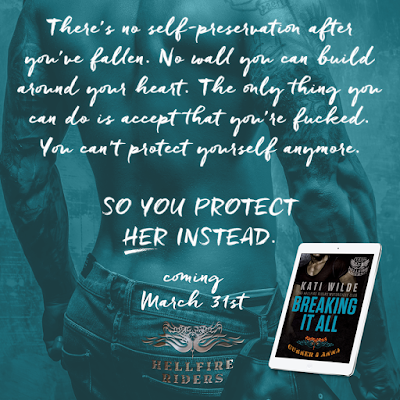 I am so in love with this series, it is not even funny. Ms. Wilde and the other authors have interwoven stories for us and they just keep getting better and better!!

Anna and Gunner—two people who you root for to be together, but both have their heads up their asses and refuse to cross the line. So frustrating! But when the line gets smaller and smaller…. So satisfying.

When Gunner finds out Anna is his best friend’s little sister, all bets on trying to get in her pants are off. But that does not lesson the desire he has for her, not even a little bit. He doesn’t even see other women anymore even though he knows he won’t cross the line.

Anna has always lusted after Gunner, always. From the first meeting when she flashed him on the side of the road to now, the fire in her panties has been growing stronger and stronger.

Anna’s brother was with Gunner when he gets taken, possibly by the people running the fighting ring and kidnapping bikers—and Gunner feels like he is the one who has to get him back and protect Anna at all costs. What they don’t know is that even the small actions they are making are adding fuel to the fire…

I am anxiously awaiting the next book in the series. And by anxiously, I mean I am as patient as a sugar-high two year old without a nap! I WANT THAT BOOK!!!
~ Review by Devlynn 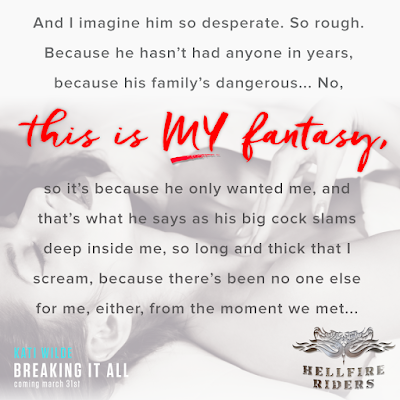 Kati Wilde, in conjunction with Ruby Dixon, Alexa Riley and Ella Goode, is a contributor to the Motorcycle Club series. These sexy stories will deliver a hot romance between your favorite leather clad heroes and their amazing women. Don't miss even one! 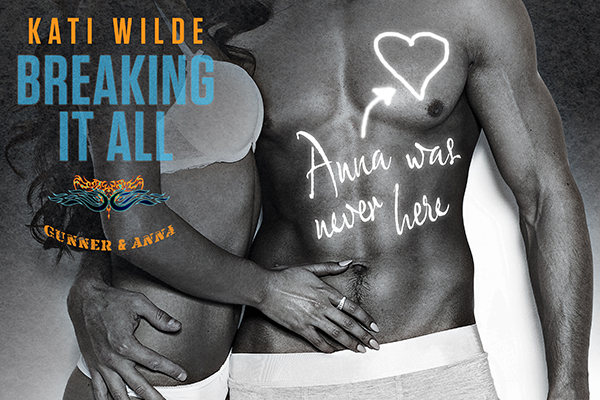