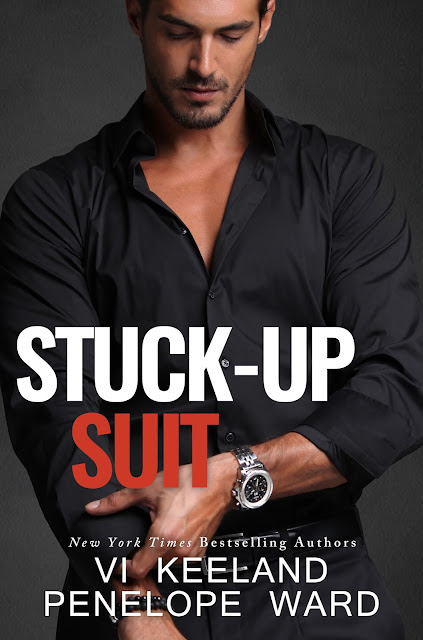 It started out like any other morning on the train.

Until I became mesmerized by the guy sitting across the aisle.

He was barking at someone on his phone like he ruled the world.

Who did the stuck-up suit think he was...God?

Actually, he looked like a God. That was about it.

When his stop came, he got up suddenly and left. So suddenly, he dropped his phone on the way out.

I might have gone through all of his photos and called some of the numbers.

I might have held onto the mystery man's phone for days―until I finally conjured up the courage to return it.

When I traipsed my ass across town to his fancy company, he refused to see me.

So, I left the phone on the empty desk outside the arrogant jerk's office.

I might have also left behind a dirty picture on it first though.

I didn't expect him to text back.

I didn't expect our exchanges to be hot as hell.

I didn't expect to fall for him―all before we even met.

The two of us couldn't have been any more different.

Yet, you know what they say about opposites.

When we finally came face to face, we found out opposites sometimes do more than attract―we consumed each other.

Nothing could have prepared me for the ride he took me on. And I certainly wasn't prepared for where I'd wind up when the ride was over.

All good things must come to an end, right?

Except our ending was one I didn't see coming. 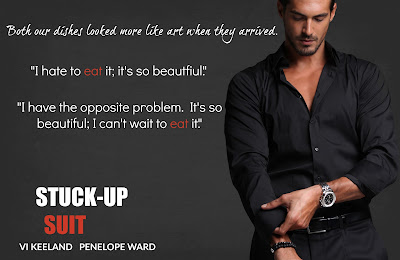 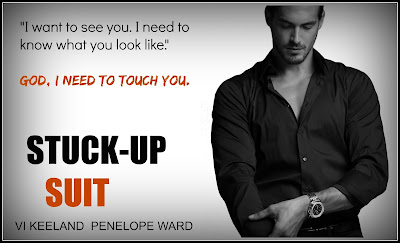 Stuck-up Suit is written by a pair of comedic geniuses with a just the right amount of heat!!

I can’t get over how much I loved Stuck-Up Suit! But then, there was an uber-rich, HOT, HUNKY MAN, living in NYC. And there is a sassy, fun, take-no-shit chick. That right there is amazing. Oh… there’s also a goat on a beach. Yep, there is. (Laugh now, I almost peed myself on a plane).

I laughed, I cried, I felt a myriad of emotions that flowed through my body like molten lava. There was one point I had to close my eyes and breathe deep so I wasn’t rubbing my legs together too hard to relieve the ache that settled low and deep. And panties, well they were not a necessity. Really, joining the mile high club would have been the perfect break to my reading.

A lost phone. A suit. A train. Ask Ida. So much more. I fell in love with Suit immediately. He’s real. So he’s got money, there are people in this world who do. But you know what, he has an amazing heart. He makes me long for someone like him. So yes, while my emotions were all over the place, I was totally and head over heels in love. Suit is my new book boyfriend! I’m ready to pounce as soon as I hit NYC! Suit—where are you?
~ Review by Heather

Soraya Venedetta rides the train to work every day. But one day, she sees a man on the train that she’s never seen before. A typical Stuck-Up Suit, based upon his phone call manners—or lack thereof. When he gets to his stop and departs the train, he drops his phone without realizing it. Soraya finds the phone and proceeds to check out pictures and other information. It takes a couple days, but Soraya decides to return the phone after learning the man’s identity—Graham Morgan.

But when Graham refuses to meet Soraya in person, she decides to take a dirty pic and proceeds to text him a not-so-nice message before leaving the phone on an empty desk. Soraya never expected Graham to text her back, never mind a series of hot and sexy messages. Now Graham and Soraya are meeting in person. And so their story continues…

I refuse to reveal any real details regarding the relationship between Graham and Soraya as you need to experience this book for yourself, but I’m happy to tell you how their story affected me. Vi Keeland and Penelope Ward gleefully ripped my heart out of my chest with Stuck-Up Suit, but in the end they pieced me back together. Along the way, I laughed, cried, despaired, gasped, gulped, cringed and cheered. Holy moly, did I ride the roller coaster of emotions and LOVED every minute.

Run, don’t walk, over to your phone, e-reader, computer—wherever you purchase your books from—and one-click this book as quickly as you can. Graham and Soraya’s story is snarky, fun, sexy, swoony, cringe-worthy, breathtaking, hopeful, hopeless, heartbreaking, enlightening, eye-opening, realistic, and full of love.
~ Review by Missy 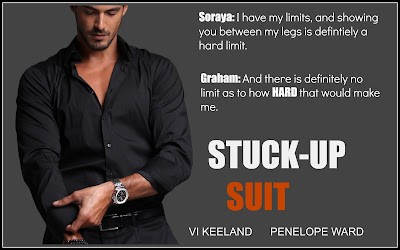 Vi Keeland is a native New Yorker with three children that occupy most of her free time, which she complains about often, but wouldn't change for the world. She is a bookworm and has been know to read her kindle at stop lights, while styling her hair, cleaning, walking, during sporting events, and frequently while pretending to work. She is a boring attorney by day, and an exciting New York Times & USA Today Best Selling smut author by night!

In 2013, she released her first romance novel and never looked back. To date, she has eight novels released, with two more in the works for 2015. Her novels have appeared on the Top 5 lists of Amazon USA, UK, Canada, iTunes and Barnes & Noble.

Penelope Ward is a New York Times, USA Today and Wall Street Journal Bestselling author. She grew up in Boston with five older brothers and spent most of her twenties as a television news anchor, before switching to a more family-friendly career.

Penelope lives for reading books in the new adult genre, coffee and hanging out with her friends and family on weekends.

She is the proud mother of a beautiful 10-year-old girl with autism (the inspiration for the character Callie in Gemini) and a 8-year-old boy, both of whom are the lights of her life. Penelope, her husband and kids reside in Rhode Island.

Posted by Beth Cranford at 2:36 am