Review - Listen to Me by Kristen Proby 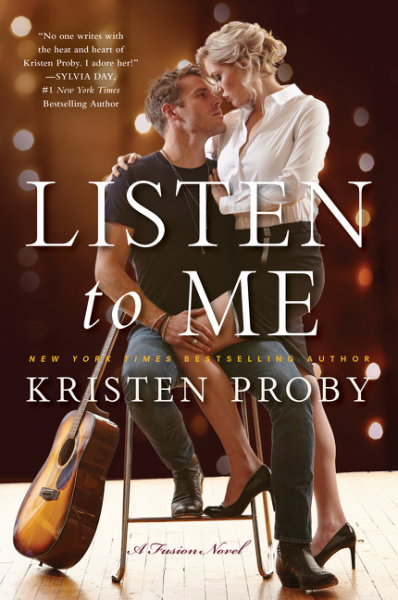 In New York Times and USA Today bestselling author Kristen Proby’s brand new series, five best friends open a hot new restaurant, but one of them gets much more than she bargained for when a sexy former rock star walks through the doors—and into her heart.

Seduction is quickly becoming the hottest new restaurant in Portland, and Addison Wade is proud to claim 1/5 of the credit. She’s determined to make it a success and can’t think of a better way to bring in new customers than live music. But when former rock star Jake Keller swaggers through the doors to apply for the weekend gig, she knows she’s in trouble. Addie instantly recognizes him—his posters were plastered all over her bedroom walls in high school—he’s all bad boy...exactly her type and exactly what she doesn’t need.

Jake Keller walked away from the limelight five years ago and yearns to return to what’s always driven him: the music. If he gets to work for a smart-mouthed, funny-as-hell bombshell, all the better. But talking Addie into giving him the job is far easier than persuading her that he wants more than a romp in her bed. Just when she begins to drop her walls, Jake’s past finally catches up with him.

Will Addie be torn apart once again or will Jake be able to convince her to drown out her doubts and listen to her heart? 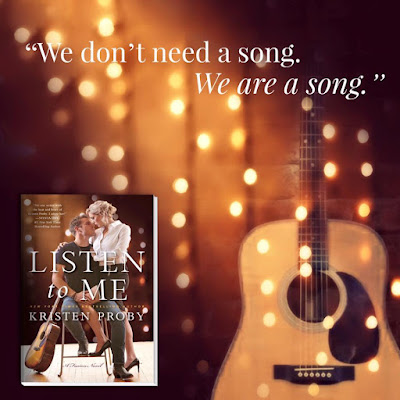 Jake Keller is the perfect kind of cocky.

Fun, playful, and exasperating in an endearing way, he’s one of my favorite kinds of book boyfriends. The kind who doles out banter like he was born flirting with the delivery room nurses. The easy kind voted “most likely to steal my heart.” And so not what I was expecting from an ex-rock star.

He’s not overly-angsty or broody or moody or mean. He’s not indecisive or indiscriminate. He’s carrying around a fair amount of baggage, and he’s the cause of a good deal of drama in this book, but he’s not a dramatic character—and given the circumstances of his life, his drama is maybe a little warranted. I initially was a bit put off by the conflict in this book, but it resolved itself quickly in a way that left my heart warm and happy.

And—you should know—I loved the ever-loving crap out of Jake Keller.

I kind of loved Addison a lot too, and for almost all the same reasons. She gave banter as good as she got. She didn’t stand down. She’s smart, strong, feisty and big-hearted. She’s got a giant tote-load of her own baggage, and all that baggage weighs things down for a bit, but she works through it and moves past it and it is awesome.

This book was just FUN. It’s sweet. Swoony. Hilarious. Emotional. It is all those things in all the best ways. It’s sexy, but I feel like its charm is most potent in the quieter moments—because those quieter moments were basically perfection and my heart is all aflutter over them.

I also loved Addie’s group of girlfriends. I think that writing girlfriends, especially a group of girlfriends, is tricky. I was kind of skeptical at first, but I’m completely sold now. These women are fantastic, and the best kind of girlfriends. They pull no punches, they love fiercely, and they cheer each other on. I am beyond excited to get more of their stories in this series (and ohmygod, that set-up for Cami’s story is killing me right now. I NEED IT.)

Listen to Me left me on a high—it’s a feel-good, lighthearted, funny/sweet romance. I giggled, I smiled like a loon (for almost the entire book), and y’all? If you want to make your heart happy, pick up this book. I am so excited for more from this fun new series!
~ Review by Shelly

Give me a man who has a way with words and watch my knees go weak.

Make him a former rock star, with a cocky exterior and a soft center, and I'm done. Totally D. O. N. E.

Yup, I'm a goner for Jake Keller—and I have zero regrets. Because he's the ultimate blend of bad boy and good man, who has the right words (mostly) and who makes (dumb) mistakes, but who still surrounds himself with the very best people.

People that are insanely easy to care about. Like Christina. And Max and Tiffany. And, of course, Addison.

Man—or, more actually, WOMAN—alive. Addie is one hell of a heroine. Smart, a little brassy (in the BEST way), sassy and wounded by her past. But not a victim. A reasonably self-aware woman, with a tribe of amazing girlfriends.

Seriously, y'all. #SquadGoals galore, when it comes to the women of Seduction. This tight-knit group of friends is the perfect foundation for Kristen Proby's new series, and I can tell you with certainty I am already addicted to it.

You will be, too. Aside from the Cami tease (*gasp* I NEED that book), Listen to Me is jam-packed with flirty and funny banter, plenty of panty-melting moments—courtesy of Jake's dirty mouth—and just enough tension to keep the story fresh.

And, dude (dudette?!), that tension played into the overall story well. Yes, it could have been avoided, but not in the forced-drama way—in the open-your-eyes-and-see-what-I-see way. And, of course, said tension led to some beautiful, swoonworthy moments. Where my man, Jake got to show of his verbal skills...or should I say, oral skills?! Either way—if he hadn't already won me over within the space of his first POV chapter, I'd have fallen for him as this book closed out with the BEST ending. *Sigh* Speaking of weak knees...
~ Review by Beth 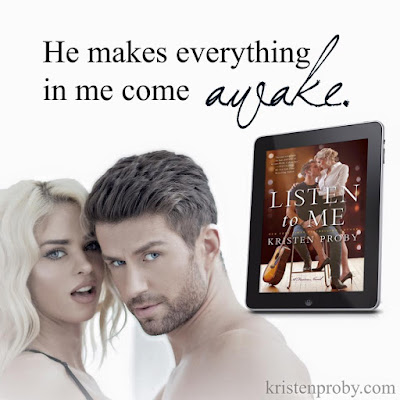 GET THE FEATURED SONG “IF I HAD NEVER MET YOU”

New York Times and USA Today Bestselling author Kristen Proby is the author of the bestselling With Me In Seattle and Love Under the Big Sky series. She has a passion for a good love story and strong, humorous characters with a strong sense of loyalty and family. Her men are the alpha type; fiercely protective and a bit bossy, and her ladies are fun, strong, and not afraid to stand up for themselves.

Kristen lives in Montana, where she enjoys coffee, chocolate and sunshine. And naps.