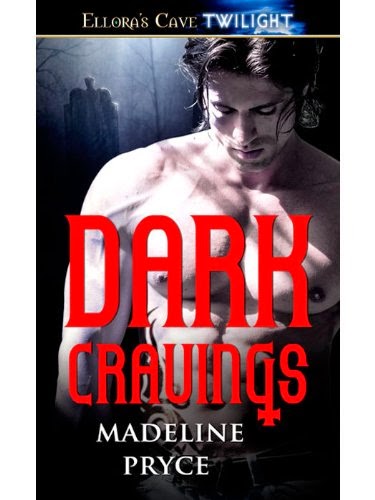 As a half-breed vampire, Ella Grey’s life sucks. She does her best to pass the time killing demons and secretly admiring her Shadow Hunter partner, Micah. He’s hot, dangerous and knows it. He’d be just Ella’s type if he weren’t likely to kill her the moment she put a toe out of line.

A chance encounter with a succubus changes everything. From the second the succubus’s spell washes over them, Ella and Micah are helpless to keep their hands off one another. The sex, when it’s not leaving them on the verge of death, is earth shattering and for the first time in ages Ella is connected with someone on a level she’d feared lost forever. But a dangerous prophecy has been set into motion, and if Ella’s not careful it’ll pull her straight from Micah’s arms and into the deepest bowels of the underworld.

Publisher’s Note: This book was previously published under the title Blood Lust Rising. It has been revised and expanded for EC.
ADD TO GOODREADS

This book is about a half-breed vampire Ella and her partner Shadow-Hunter Micah, both work under Micah's dad Richard's company Shadow Agency. Micah is hot, sexy and very dangerous to Ella. One mistake from Ella, Micah will kill her without a second thought....At least that's what Ella knows.

This book starts out with Ella and Micah out on a hunt, when an argument started to get heated between the two. Their argument was cut short when they encountered a succubus that turned any hate they had for each other into something else. The succubus did something to them that changed everything. Four days later they woke up and found themselves in a hotel room, naked, bloody, tired, with bite marks and scratches all over their body. Neither one had any idea what happened and how they got in the hotel room. Then Micah's brother Eli came in to help, they brought Ella home, before Micah collapsed in Ella's uncle Roy's house. Roy had no choice, but to bring Micah to ER before he loses his life. Which complicates things, having Micah in ER puts Ella under Richard's radar. One of the rules of the agency is, for Ella never to bite a human/partner. That is a something that Ella did, which she started to remember little by little. The memory of the past four days started flooding by pieces by pieces into Ella and Micah's mind. In that four days that they were missing, they were in the hotel room having lots and lots of hot sex. When I say hot, I mean hot. Every sex encounter that these two characters had, was nothing but sexy. After that day with the succubus, they couldn't keep their hands off each other. Each and every day they find out more about what's going on with them, they find out that there are soul-mates and that four days they were together.. that was actually a mating-ritual that neither one could've stopped. Everytime they are close to each other, they can't help but be together like animals marking their mate.

This book is a paranormal love story that is full of action and lots of sexy scenes between the two characters. I read this book in one sitting, I could not put it down. I stayed up way past my bedtime trying to finish up this book. I love this book so much, I cannot wait to read the next book about Ella and Micah or anything that Author Madeline Pryce writes.
~ Review by Neilliza

Madeline Pryce wrote her first novel when she was ten, penned with neon-pink ink in a loose-leaf binder. Captivated by romantic literature, yet intrigued by the paranormal, she continues to develop her own voice, writing the kinds of stories that inspired her as a teen.