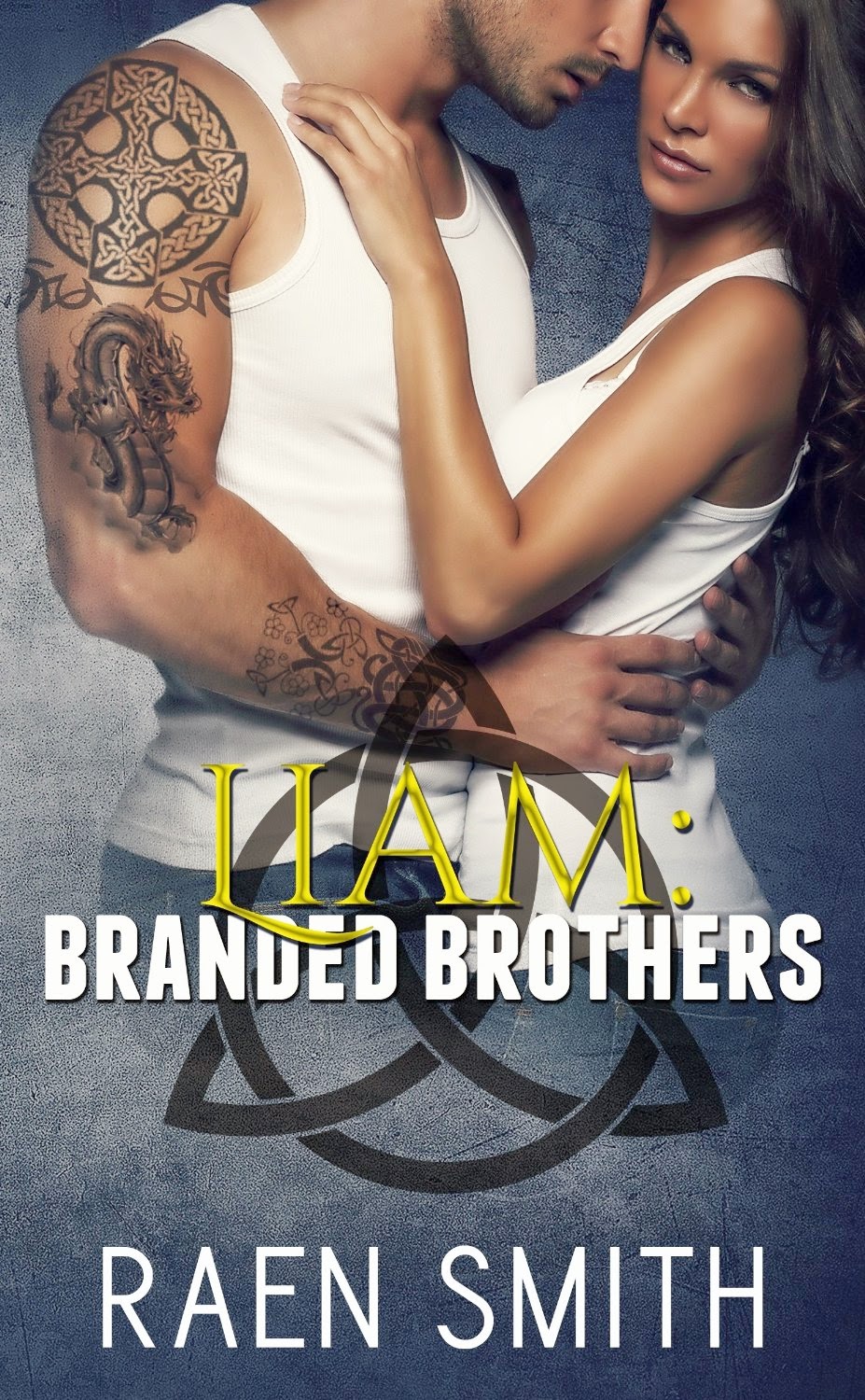 One letter can change it all...
When caregiver Charla Tayor arrives at the isolated cottage of a man suffering with Alzheimer's, she's given one instruction to carry out upon his death: to deliver a letter to a man named Liam Murphy. Three years later, she's face-to-face with the letter's recipient, a tattooed Irish Bounty Hunter who's exactly the type of man she's trying to avoid.
But Charla can't ignore their undeniable connection as Liam drags her deeper into her patient's troubled past. Just as she's opening her heart, her life teeters on a dangerous edge, and there's only one man who can save her.

Stop what you're doing. This book has an Irishman, a nurse and a bar in it. I'm currently formulating a joke. We may be an Englishman and a Scot shy of a good one though. I'll let you know how I go. But never mind that... Joke potential aside, Liam: Branded Brothers was a really good, suspenseful book. I read it alone, at night. Perhaps NOT my best idea. Surely that's the mark of a well written suspense though - it makes a grown woman check under her bed before she climbs out for a mad dash in the dark to the bathroom. No? *hangs head in embarrassment*

Charla Taylor was wanting to get away from life when she agreed to work for Jack, an early-onset Alzheimer's patient, at his secluded cabin away from pretty much everything. Her fiancé was caught with a blonde and she's still a little scarred from her less than stellar childhood. When Jack gives her an envelope to be delivered to Liam Murphy upon his death, she agrees to make the delivery, not realising it's going to involve her in a search that places her in danger - and in the sights of a tattooed Irish bar owner/bounty hunter. Liam, a former Marine and deceptively good guy (despite his outward appearance), still misses the ex-wife that walked out a couple of years ago. Then Charla walks in to his bar and hands him the life-changing letter. The attraction only grows as they delve deeper into Jack's past and work together to solve the mystery of the letter.

I loved Liam - the book and the character. He's not what I (or Charla) was expecting. He's missing the asshole element that so many romance novel alpha males have. I'm glad of that - I'm honestly a little tired of the 'I'm only kind, nice and loving to you' hero that thinks it's ok to be a bastard to everyone but their woman. The book itself was well written, the mystery and suspense interesting enough to keep me involved to the end. The chemistry between Charla and Liam was believable. They're both still hurting from previous relationships and a little cautious but it's easy to see that they're a match. The secondary characters - Ronan, in particular - are a nice addition and a great starting point for another book. Liam: Branded Brothers was written to introduce a series and I, for one, would definitely be interested in seeing more from these Irishmen. No joke.

This is a standalone book, no cliffhanger.
~ Review by Beth

“The last twenty-four hours have been mind-blowing. I never guessed a beautiful woman sitting at my bar with an envelope could change my life like you have. But you did,” Liam said.
“Like a hot bed of trouble,” Charla replied, taking another drink. The wine was going down easy, and she could feel herself beginning to lose the wall she was trying to keep up all day. She slid her empty plate into the middle of the table and placed her napkin on it. “That’s what I am. Trouble.”
“I like trouble if you haven’t noticed. I’ve got a case full of guns in my bedroom if you need more proof.”
Charla’s head fogged and her cheeks flushed at the mention of his bedroom. All she could think about was his soft lips and his hand on her ass. She wanted him to do much more than that. She wanted him to explore every inch of her body.
Damn it.
They’d only known each other for twenty-four hours. She was the last person to be hopping into bed with a new man. It had taken her six months to sleep with Rex. One-night stands weren’t in the Charla Taylor vocabulary, especially ones with Irish gunslingers. She could hear Jill’s voice in her head, it’s not a one-night stand if you do it again, Charla.
He took a drink of wine and then swirled his glass around before setting it down. “Mom was right. This was worth waiting for.” He cleared his throat and continued, “So, tell me about your family. We’ve spent all day looking for and talking about mine. What’s your family like?”
“Well,” she stuttered. She hated talking about her family, if she could call it that. She never really considered Dotti to be a mom. She was her biological mother, but Charla couldn’t find it in her heart to think of her as mom. Real moms didn’t abandon their kids. Real moms didn’t put their kids into a situation like Charla had to endure with her stepfather. “I wish I would have been adopted like you.”
“That bad?” He stopped chewing and looked up.
“That bad. Alcoholic mother. Never knew my father. Abusive step-father died when I was fifteen, thank God for that small victory.” She put her hand on her wine glass but didn’t pick it up. She felt a strange sudden urge to divulge her secret to Liam. She hadn’t felt this sudden need to purge in years. Every time she did, no matter if there was a foot of snow on the ground, she’d go hiking at Lake Woods and scream into the empty forest “I LET HIM DIE.” The scream would disappear into the woods, just like her urge to release her secret.

Raen Smith is the author of the Unraveled Series and Southbound Surrender. She loves writing about complex characters with a sprinkling of happily ever after.
When she isn't writing novels, she spends her time wrangling two small sons and teaching at a technical college. She lives in a small corner of Wisconsin with her husband and two sons.
Visit Raen Smith's website, Facebook page, Goodreads page or follow Raen on Twitter.
Posted by Give Me Books at 4:05 am