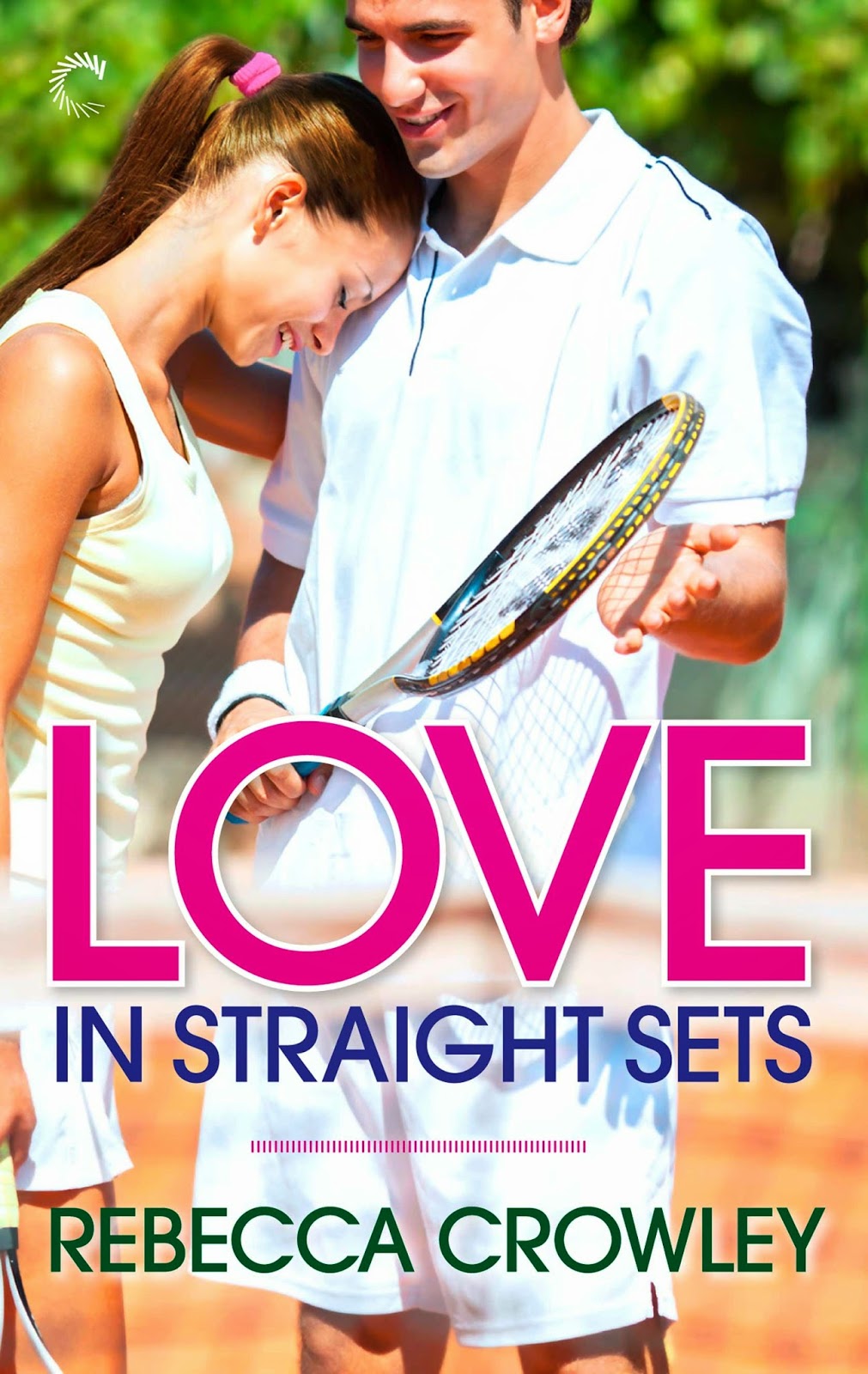 Regan Hunter came to tennis late in life, but she's worked hard to become one of the world's top players. Beating the odds has made her unstoppable on the court and neurotically controlling off of it. So when her manager hires a new coach, a has-been who left the sport after a scandal, Regan wants him gone, fast.

Ben Percy, a former Grand Slam winner, is well aware of Regan's reputation for driving coaches away—usually screaming. But working with the notoriously mercurial Regan could be just the break he needs to take his career to the next level, and he's never been one to scare easily. He must stick to only one rule: hands off Regan.

Keeping his distance from Regan is more difficult than Ben ever imagined. Behind her tough, sexy exterior is a woman he wants to get to know better. And Regan feels a connection with her patient, easy-on-the-eyes coach that's hard to ignore. But with the biggest championship of all on the line, romance may be completely out of bounds…
ADD TO GOODREADS

Ah, tennis. It's such a great game. I've had two major tennis-related crushes in my life - Australian player Pat Rafter, when he was at the peak of his career (and had a side gig as an underwear model) and Peter...Peter Colt, the affable British underdog from the movie Wimbledon. So it's fair to say that when I opened Love In Straight Sets my thought process was as such: tennis + a hot guy and a tough-as-nails-but-only-on-the-outside girl + a puntastic title = a book headed straight for the "Keepers" collection on my Kindle. Turns out, I was spot on.

Regan Hunter is a tennis brat. Controlling, a little spoiled and definitely used to getting her own way. She's a few short months away from retirement and desperate to get her hands on a Grand Slam title before she closes the book on her career once and for all. Ben Percy is a former champ who left the sport in disgrace before his career ever truly got off the ground - one Grand Slam victory followed by years of obscurity and hard work, trying to get enough money together to help him reunite with his sister. She needs a new coach and, given her tendency to drive them away, she's short on options. He needs this opportunity and the money that comes with taking on a high profile client. She doesn't want him to stay but is unable to fire him. He can't afford to walk away no matter how bratty she gets. Soon they find their groove and it seems that their mutual attraction and solid on-court chemistry makes victory a foregone conclusion. There's really only one thing that can derail their plans to get her on the winners podium. Need a hint? Falling in love.

You have hand it to Rebecca Crowley. Regan had the potential to be a supremely unlikable heroine. She's rude and a little mean. But you get just enough glimpses of the scared, anxious girl below the surface to want to keep reading. Ben, on the other hand, is the opposite. He's friendly, patient and willing to work hard to get through to the player and the person beneath Regan's brittle exterior. He's easy to like. As is the book itself. The tension between player and coach is matched by the tension of the tennis scenes - it's hard not to get invested in the outcome. There was definitely enough happening to keep me turning the page and muttering "one more chapter". There may have even been enough for me to dust of my old racquet, put the worn-out Wimbledon DVD back on the shelf and hit the courts. Maybe. After one more chapter.

This is a standalone book, no cliffhanger. 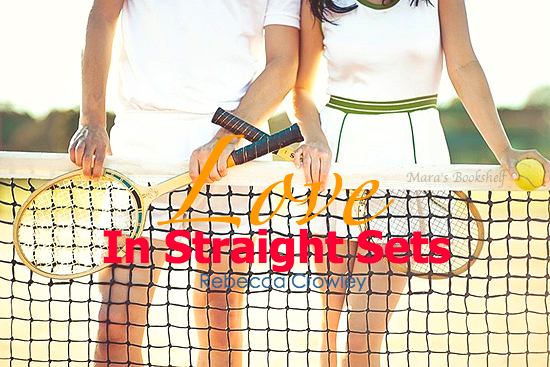 As a huge fan girl of tennis, I was thrilled to see a book with tennis players as main characters. Love In Straight Sets is a light, short romantic read with a retired 1-time tennis champion as coach and a popular yet retiring tennis women’s player as the hero/heroine.
This is the story of Ben and Regan’s path to the Baron’s Open and to each other’s lives and hearts.
Ben had once been a young rising tennis champion, but after a personal problem halted his success in the sport, he became a tennis coach for young tennis athletes who all want to be pros and champions. This is what he do now, more than a decade after being a champion, just to get by and earn enough money to sponsor his sister to go to the US. So, even though he heard many stories about how Regan can be a terror and a spoiled athlete to her former coaches, he took the job. Ben was a lovable character to read. I love how he works for his sister, so he can bring her to the States. He’s a softy but as dreamy as any alpha can be in his own way. Plus, he has a dog. I love my heros with pets. And he named it Boris which I immediately thought Boris Becker and I was right! Ha!
Regan who is now turning 30 and already decided to retire after the Baron’s Open, wants to retire with grace and with her name on the Championship trophy. She is known to fire her coaches in a whim, depending on her mood, and her manager has had enough of it. He hired Ben to be her coach and in under no circumstance can she fire him unless Ben touches the “product” which if that happens, Des (Regan’s manager), will fire him himself.
There was no instant attraction or love at first sight that happened which I was grateful for. Even if this is a shorter book than the usual full-lengths, Rebecca Crowley didn’t rush into the insta-love. There was some teeny tiny mention of physical admiration but none of those “s/he sees her/him for the first time and s/he can’t get her/him off his/her mind” annoying stuff. Rebecca built their attraction quickly but without me feeling it was rushed. And once their attraction is shown to us, you will feel it.
"His palm flattened around the back of her neck, her fingers tightened on the impenetrable muscle in his leg and she let her eyelids drift shut as they came close enough to share a breath."
There were also glimpses of tennis players’ lives off court and I felt like I already know most of it because I personally follow my favorite tennis players’ lives on and off court too. I’m familiar with the press conferences, PR appearances, rivalries, practices, and championships. It’s interesting to read through what Regan and Ben are building, somehow getting to know each other on a less professional level, while they’re practicing for the Baron’s Open. 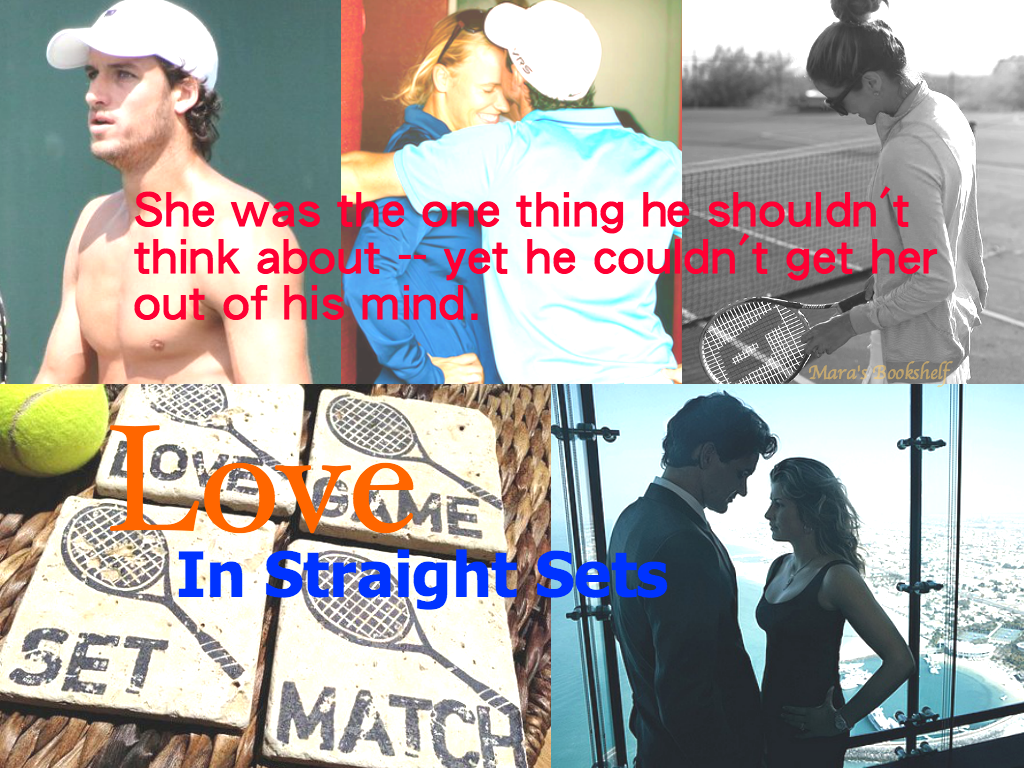 This was not without drama and personal struggles, of course, there were heartwarming and sad moments where I may not be famous but I understand Regan’s thoughts on wanting a simpler life yet she knows herself enough that she admits she won’t last long staying in one place doing ordinary day-to-day things and then there’s Ben’s struggles in life but he’s still strong and determined, not giving up. Both of them are admirable. Add to the what Des did, pretty frustrating that guy! Good thing all’s well that ends well.
Stars: 4 stars!
Recommended to: I recommend Love In Straight Sets to everyone looking for an easier read from the emotionally heavy, erotic, thriller books. This was a great break for me. Like a palette cleanser. A sorbet. It’s short but sweet and didn’t disappoint with the romance part.
POV: First person. Dual POV.
Series: No.
Cliffhanger: No.
~ Review by Mara 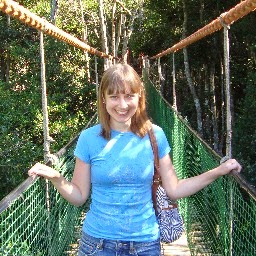 Rebecca Crowley inherited her love of romance from her mom, who taught her to at least partially judge a book by the steaminess of its cover. She writes contemporary romance and romantic suspense with smart heroines and swoon-worthy heroes, and never tires of the happily-ever-after. Having pulled up her Kansas roots to live in New York City and London, Rebecca recently relocated to Johannesburg, South Africa.

a Rafflecopter giveaway
Posted by Give Me Books at 12:38 pm