Review - The Making of Matt by Nicola Haken 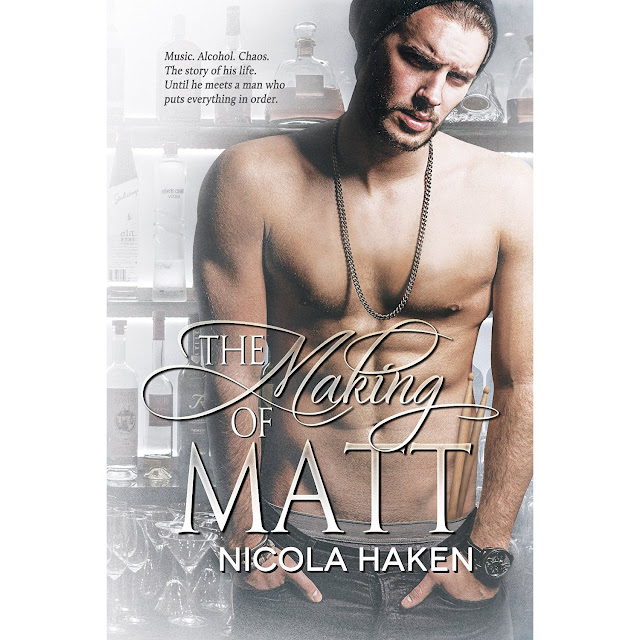 Matt Carter, self-proclaimed sex-god and drummer for world renowned Souls of the Knight, didn’t have the time or inclination for planning his future, preferring to fill his days with music, women and alcohol. He didn’t want or need anything else in his life.

Until the band parted ways and he found himself no longer living the dream.

Bored and lonely, with too much time and money on his hands, Matt turns to his best friend, Alex Clark, to help devise a new direction to take his life in. Together, they embrace their newfound venture, as owner and manager of one of L.A.’s hottest gay clubs – Kaleidoscope. For the first time, Matt has a plan. He knows where life is heading.

Until a devastating phone call turns his whole world upside down, sending him straight into the comforting arms of his best friend and leading him to doubt everything he’s ever known or believed about himself.

Alex had always been content with his unrequited feelings for his rockstar friend, but as Matt starts to question if he might actually feel the same, he runs as fast as his feet will allow.

Has Matt gone too far? Has his reputation as an irresponsible womanizer who refuses to take life seriously, finally managed to push his best friend away for good?

Or is Alex hiding secrets of his own? 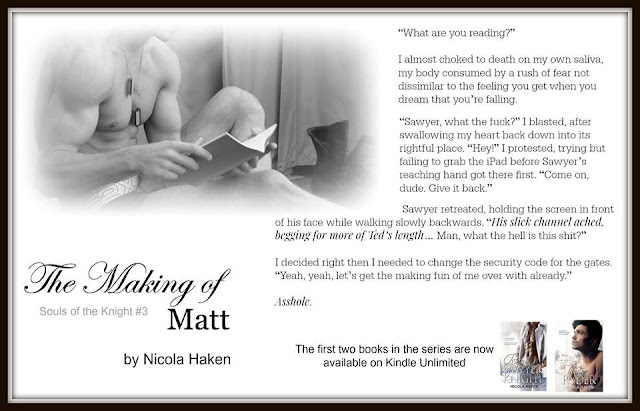 Matt Carter is a former drummer, resident mama's boy and pussy destroyer. What he wasn’t was driven, organized, and he had no plan for what happened after Souls of the Knight. But Alex Carter was his BFF and when he proposed that he find a new passion, he blew him off. Then his phone rings and spins his world around. Matt has no idea how to cope with what comes next. Alex is there supporting him. The feelings that Matt feels for Alex…he isn’t sure if they are real, from the trauma or what, but he wants to explore them.

Feels, oh the feels! I’m not going to flail about but I will say, if you want a book that makes your heart soar, renew your faith in love and the human spirit, this is your book! There are some real life and hard issues that come up, but they are dealt with in an educational but loving manner. For Matt, finding love with Alex isn’t about being male or female but finding true love. Everyone deserves to be loved, and Matt and Alex found it together!
~ Review by Heather

I occasionally get the pleasure of recommending books to friends that want to try something new, and one of my favorites to recommend is always Being Sawyer Knight. Why? It’s just SO good and for people new to the M/M genre, I think it’s an excellent place to get started. And now, I can add this book—the third in the same series—to my list of go-to recommendations. Because The Making of Matt is ALL THE THINGS I love about reading.

Matt Carter doesn’t know what to do with himself now that Souls of the Knight are no longer. His life was always music—and the women and booze that came along with it. Lost and a little unsure, Matt turns to his best friend, Alex Clark for help deciding what to do next.

Alex has been in love with his very straight, former rockstar of a best friend for a long time. But that doesn't mean anything though—nothing is ever going to happen, and even if it could, Alex has a past that he can't avoid. Getting Matt move to the next phase of his life by helping him buy a club is the least he can do…especially when Matt’s life is rocked once again.

What happens though, when Matt starts to think that his feelings for Alex—his rock, his confidante, his best friend aren't so platonic? Can these two damaged souls find their way to happily ever after?

Oh man, THIS BOOK. It is amazing. And, like I stated above, all the things I love about reading. It's funny as hell—Matt’s kindle adventures…enough said—and it had the ability to bring tears to my eyes at the drop of a hat. Who knew that laundry could have that effect on someone? It’s chock-full of characters that just mesh perfectly, and angst that's never forced and just in the right amount to get your blood pumping.

Nicola Haken wowed me with her first book in the Souls of the Knight series, and I enjoyed the second book too, but this one? This one is unequivocally my favorite. Matt and Alex are…perfect. Or, more like, perfectly imperfect. Matt is an I-don't-give-a-fuck drummer that's lost inside, and Alex has been broken a little by his past—and by his future. Together, they fit so right, it's impossible to turn away from them. I loved how they bantered, how they loved, how Matt faced this major change in his life, and how Alex showed his concern for his friend, all while (quite rightly) trying to protect himself too.

Add in “Uncle Sawyer” and Jake, Ryder and Mason, Kip and Elle, and all their crazy friendship antics, and The Making of Matt is simply unputdownable. The dynamics of this group of friends—this family—are addictive, an emotional roller coaster that I did not want to get off. I wish I didn't have to. But since I have, I'm now going to encourage everyone else to climb aboard instead. READ. THIS. BOOK.
~ Review by Beth 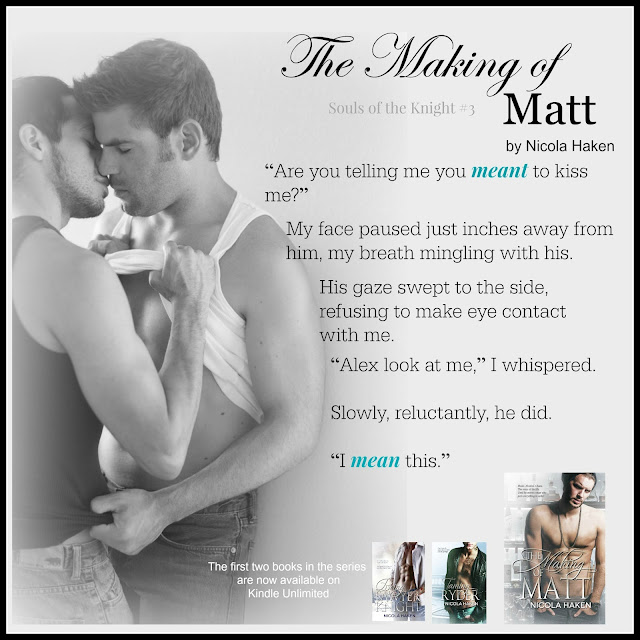 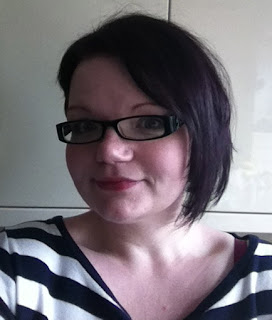 Nicola Haken lives in Rochdale, England with her husband and four children (six if you include the dog and cat!) She is the author of New Adult/Contemporary romance novels Missing Pieces, Saving Amy and the Take My Hand series. She is also the author of the m/m romance Souls of the Knight series. When she is not busy playing with her imaginary book friends (or talking about them with real life friends!) she can usually be found carrying out her ordinary mum/housewife/all round slave duties. Oh, and if the kids ever ask, she moonlights as the Pink Power Ranger while they're sleeping... Nicola is always looking for new stalkers - oops I meant friends! So why not follow her on Twitter, add her on Goodreads or like her Facebook page!

Email ThisBlogThis!Share to TwitterShare to FacebookShare to Pinterest
Labels: 5 Stars, Nicola Haken, Reviews, Souls of the Knight series, The Making of Matt