Review - Pucked Up by Helena Hunting 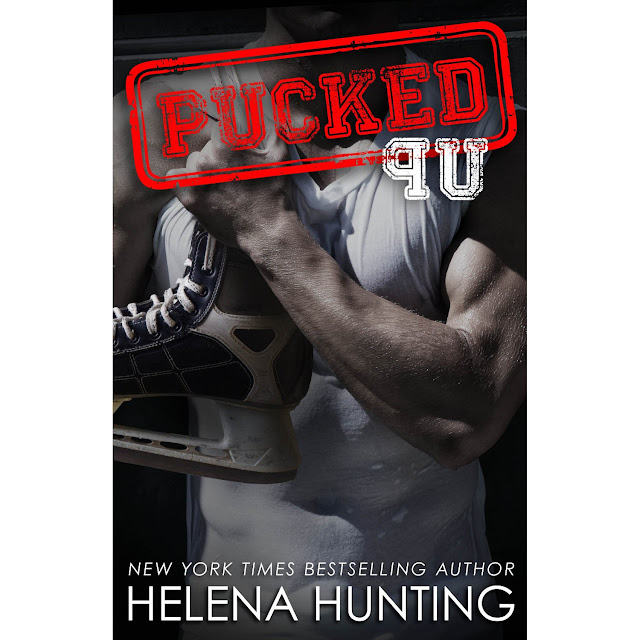 Miller “Buck” Butterson has been banging his way through life ever since a puck to the face fixed his messed up front teeth, and he was drafted into the NHL during his first year of college. After five years of deflecting goals on the ice and scoring them with puck bunnies across the Continental US and parts of Canada, Miller is ready for a girlfriend. A real girlfriend of the non-bunny variety. One he takes on dates and doesn’t jump into bed with after five seconds of conversation.

Miller thinks he’s found that woman in his teammate’s sister. Except, unlike Alex Waters, center, team captain and all round nice guy—who happens to be dating his step-sister—Miller’s manwhore reputation is well earned, and not blown out of proportion by the media. Beyond that minor detail, Miller doesn’t know the first thing about having a girlfriend. But he’s determined to make it happen.

What he doesn’t take into account is the amount of time and effort relationships require, or that constantly letting bunnies take selfies with him to post all over social media isn’t going to win him any points in the boyfriend department. Miller learns—not so quickly—that if he wants to make Sunshine “Sunny” Waters fall for him, he going to have to do a whole lot more than show her his stick skills in the bedroom. 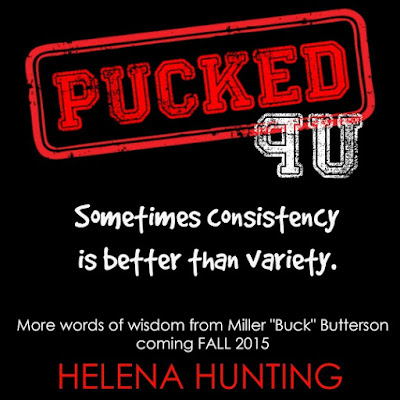 If I could give all the stars in the sky, Pucked Up would deserve them. Helena pulls out all the stops for this book! It had me in stitches, the side cramps were in full force from laughing so hard.

I had been waiting for Buck's story, and Helena didn't disappoint. The unfortunate mishaps of Buck and Sunny are a story worth reading again and again! While Pucked was more sexual, Pucked Up gave you a much needed story. I'll be impatiently waiting for the third book!
~ Review by Kelly

Miller "Buck" Buckerson has found himself in a situation he never thought he'd find himself in—he's in a relationship. As in a boyfriend/girlfriend one, well, as long as he can convince Sunny Waters of this too... But poor Buck has a shit-ton of obstacles in his way—namely social media and pictures that can quickly be taken out of context. But a man can change right?

Oh, I just loved bumbling, goofball Buck. He's the Jedi Master of bad decisions because he's usually singularly focused on the end result and the "how to get there" is just a means to the end. But he's got a heart of gold and will do just about anything for anyone.

I loved that we had just Buck's POV in this book. Though, I'd have loved to have had some insight into Sunny's thoughts as well. Buck and Sunny together are adorable. She's got a guard dog for a best friend in Lily and an extremely overprotective older brother in Alex. Both are in Sunny's ear and at her age, it's hard to not listen to their pushy advice. But my girl comes through in the end!

And in the end that's all that matters, right?
~ Review by Missy

Gah! This series is so much fun. I mean, aside from the punny titles, and the slight off-color humor, the Pucked series is just straight-up good writing, good stories, good times with great characters. After only one (freakin’ hilarious) book, I was ready for more—and I got it in Pucked Up. And now, I am ready for more again…

Buck Butterson—real name Miller—is ready to settle down. After five years of puck bunnies and meaningless sex, he wants a girlfriend. More specifically, he wants Sunny Waters, little sister of his captain, Alex, and the complete anti-hockey hooker.

Sunny lives up to her name—sweet, kind, bright and an all-around nice girl. Miller, on the other hand, has a well-earned manwhore reputation. And it doesn’t help that while trying to figure out how to be a boyfriend, he’s still getting himself into trouble on social media.

In order to be the right kind of boyfriend, Miller’s going to have to figure things out sooner rather than later…before it gets even more Pucked Up.

I loved this book. Admittedly, I read it while drinking copious amounts of wine—but I feel like that is 100% in the spirit of the book. Nonetheless, I was amused, I was pissed off, I was turned on and I was mildly belligerent (that last one might have occurred when the wine—and the book—ran out). Helena Hunting knocked it out of the park—sorry for confusing my sport puns, but you know what I mean—with Pucked, the first book in this series, and following it up with a book that was a good as this one was? Ah-mazing.

While Pucked Up wasn’t as awkwardly and outrageously hilarious as the first, it still had me in stitches at times—especially the absolutely on-point banter between Buck and his step-sister, Vi. It was a slower moving story, but in the best way. We got to spend some time getting to know Buck, the Yeti-man who was so often the punchline to Vi’s jokes in the first book, and also got to see how Buck and Alex were coping with their new, not-so-desired connection. Basically, it hit on all the best bits of Pucked without being a total carbon copy.

There were lots of eye-rolling moments, where you wonder just how PUCKING stupid one person can be—seriously, Miller?!—just as there were lots of oh, wow! moments when he showed off his “stick skills”. Boy’s got game, I like it! While I would have loved to have seen Sunny’s POV—to get a little insight into her way of thinking—Ms. Hunting did an excellent job of getting us inside Buck’s sometimes crazy, sometimes sweet, always engaging mind, and making the big lug completely lovable.

So, yeah, two books (and a couple of bottles of wine) into this series, I am completely and utterly hooked. I can’t wait for more, and I hope I don’t have to for long. I’d hate to have to get belligerent again…
~ Review by Beth 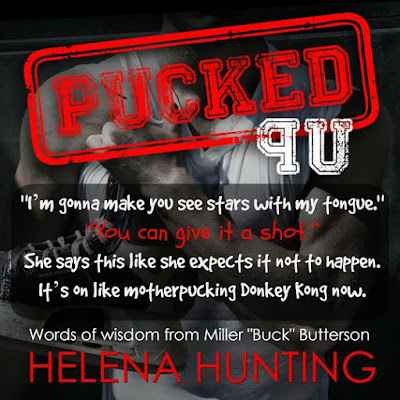 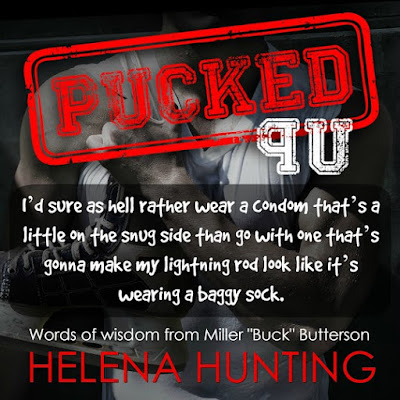 Posted by Beth Cranford at 2:45 pm