Review - Beyond What is Given by Rebecca Yarros 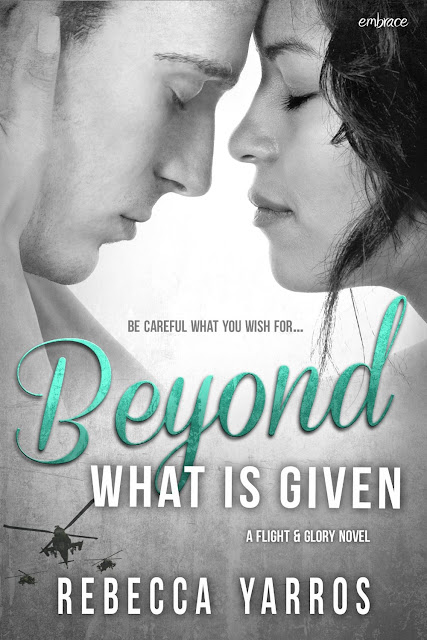 Be careful what you wish for...

Lt. Grayson Masters is focused on graduating the Apache helicopter course, and the last thing he needs is his gorgeous new roommate Samantha Fitzgerald distracting him. While her smart mouth and free spirit are irresistibly irritating, he can't deny their off-the-charts chemistry, no matter how hard he tries.

Having just been expelled from college, Sam has no business digging for Grayson's secrets while she's hiding her own, but that doesn't stop her from trying to tear down his walls. Each barrier she busts through drops one of her own, though, and she's not prepared for the truth: another woman laid claim to Grayson's heart long ago.

Falling in love is something neither Grayson nor Sam can afford, and when that line is crossed and secrets are exposed, they'll learn that sometimes it's the answered prayers that will put you through hell. 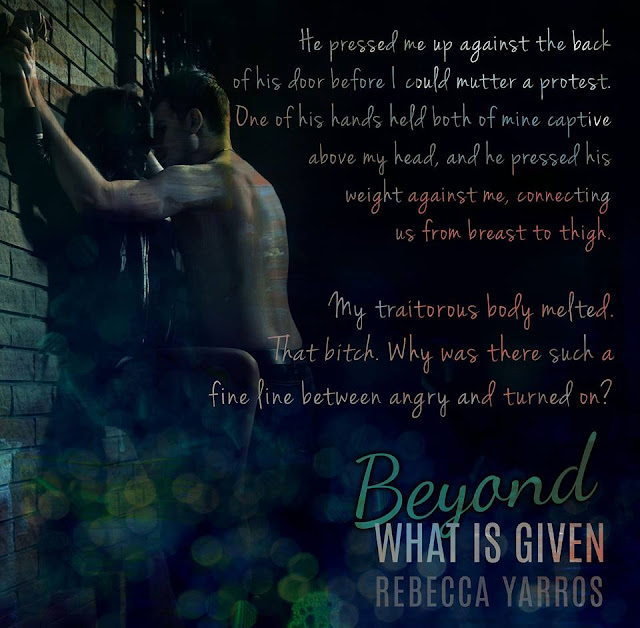 Lt. Grayson Masters is rock solid, hot as hell, and as emotionally locked down as they come. While he’s grudgingly accepted the friendship of his roommates (Jagger and Josh), he’s not exactly emotionally available. So when Samantha Fitzgerald comes crashing into his world, he literally has no idea what to do with her.

Samantha Fitzgerald (Sam) has just crossed the country to escape the mistakes of her past and attempt to start over. She’s a hot mess, but she’s trying to put herself back together. She’s not particularly won over by Grayson’s lack of charm, personality, or sense of humor – but she’s also not the type of person to let any of those things stand in her way. She's determined to figure out what lay behind his stony silence and stoic expression.

What happens between them is a sweet, tender friendship that builds with a slow burn—which is not to say that the book is slow or that it lacks heat. The chemistry between Sam and Grayson is white hot, and their story was literally unputdownable. I felt a physical pain every time I had to put this book down to tend to my real life responsibilities. Everything about this book was compelling, gripping, and beautifully written.

I've read this entire series and have loved every single book, but Grayson Masters is one of a kind. He's solid, strong, loyal, and honorable. My heart ached, burned, and overflowed all over the damn place for him. He's the ultimate hero—in every sense of the word. Sam is all fire and passion and courageous beauty. She's hiding behind some walls of her own, learning to trust herself again, and working to overcome the mistakes of her past. Watching the two knock each other's walls down and then hold each other up as they work through their issues—it’s a thing of beauty. I don't even have words, just feels. ALL the feels.

This book did things to my heart that I don’t even know how to recover from right now. I literally ached throughout almost the entire book. There were actual tears about how beautiful these characters were, how exquisitely tender they were with each other and how unfair and tragic and just…emotionally brutal their entire situation was. "Good" doesn't even begin to describe how good this book was—more like beautiful, heartbreaking, wonderful, amazing. That's a start, anyway.

My God, you guys, this book is going to leave a Grayson shaped mark on my heart for a long, long time.
~ Review by Shelly 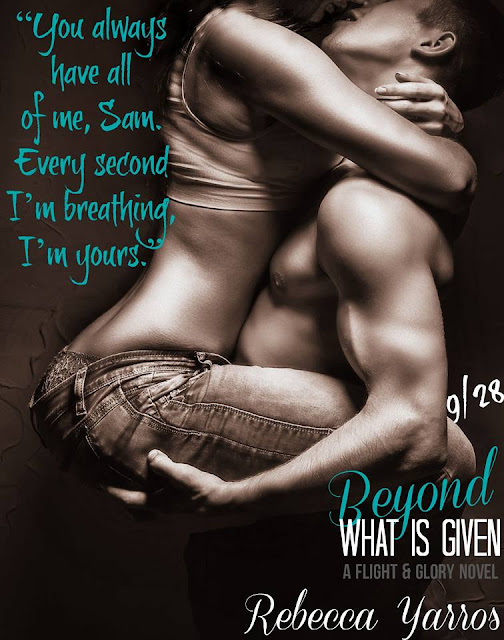 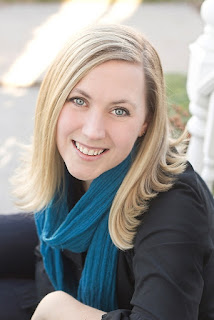 Rebecca Yarros is a hopeless romantic and lover of all things chocolate, coffee, and Paleo. In addition to being a mom, military wife, and blogger, she can never choose between Young Adult and New Adult fiction, so she writes both. She's a graduate of Troy University, where she studied European history and English, but still holds out hope for an acceptance letter to Hogwarts. Her blog, The Only Girl Among Boys, has been voted the Top Military Mom Blog the last two years, and celebrates the complex issues surrounding the military life she adores.

When she's not writing, she's tying on hockey skates for her kids, or sneaking in some guitar time. She is madly in love with her army-aviator husband of eleven years, and they're currently stationed in Upstate NY with their gaggle of rambunctious kiddos and snoring English Bulldog, but she would always rather be home in Colorado.

Email ThisBlogThis!Share to TwitterShare to FacebookShare to Pinterest
Labels: 5 Stars, Beyond What is Given, Rebecca Yarros, Review