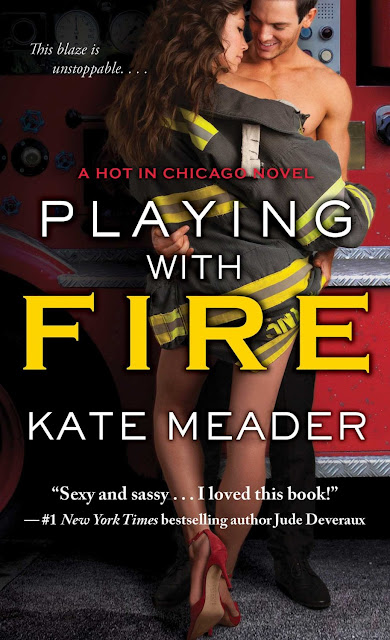 From popular romance author Kate Meader comes the second novel in Hot in Chicago, a brand-new, sizzling series that follows a group of firefighting foster siblings and their blazing hot love interests!

As the only female firefighter at Engine Co. 6, Alexandra Dempsey gets it from all sides: the male coworkers who think she can’t do the job, the wives and girlfriends who see her as a threat to their firefighter men, and her overprotective foster brothers who want to shelter their baby sister at all costs. So when she single-handedly saves the life of Eli Cooper, Chicago’s devastatingly handsome mayor, she assumes the respect she’s longed for will finally come her way. But it seems Mr. Mayor has other ideas…

Eli Cooper’s mayoral ratings are plummeting, his chances at reelection dead in the water. When a sexy, curvaceous firefighter gives him the kiss of life, she does more than bring him back to the land of the living—she also breathes vitality into his campaign. Riding the wave of their feel-good story might prop up Eli’s flagging political fortunes, but the sizzling attraction between them can go nowhere; he’s her boss, and there are rules that must be obeyed. But you know what they say about rules: they’re made to be broken… 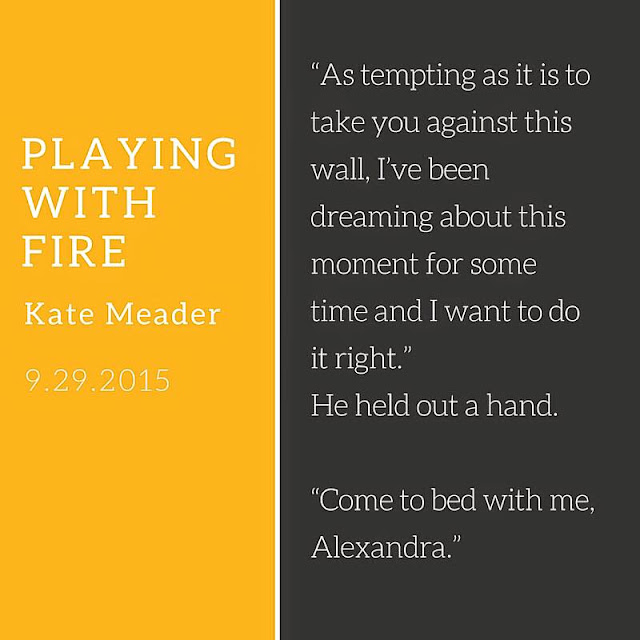 I’m voting ONE for Mayor Eli Cooper. Holy smokes, I AM IN LOVE!! *Sigh* *Swoon* *Flail* *Falls down dead*

Alex Dempsey doesn’t much like Mayor Eli Cooper. The (handsome, charming, sexy) jackass has made it clear that, because she’s a woman, she shouldn’t be a firefighter—she’s a distraction, she’s not strong enough, she’s a girl. But when Alex saves his life, she’s convinced she’s finally proven herself…

Of course, it’s never that simple in the grey world of politics. The Mayor is fighting a losing battle to retain his position in the upcoming election, and Alex’s rescue might be just the thing he needs to rescue it.

Only, Eli isn’t just fighting to hold on to his mayoralty. He’s also fighting his attraction to sassy, snarky, pain in the ass known as Alexandra Dempsey. And that fight might just prove to be the fight of his life…

I FLOVED THIS BOOK. Shouty caps necessary. I sent crazy, giddy, over-the-top messages to my friend (and fellow reviewer), Missy while I was reading it, demanding she stop everything and read it RIGHT THE FUCK NOW. I needed someone to flail and fangirl with. I needed someone to understand my intense desire to find Eli and jump his bones. I needed someone to record my claim over Eli and Wyatt (who was so freaking awesome in this book, I can’t stop thinking about him, even now). I needed someone!! Damn it, Missy, you were that someone!!

Playing with Fire is just so…perfect. It’s a hate-to-love story and it is played out so well, I wouldn’t change a thing about it. Well, maybe I would. If I could replace Alex in Eli’s arms…that’d be grand. This book, though, was fun, funny, sexy as HELL, and actually a little bit heart-breaking.

Eli and Alex have both lost so much—in different circumstances, to different degrees, but they are alike in their loss, and that base-level connection, as well as their sizzling, heat-off-the-charts attraction, makes them a pleasure to read about. I loved with them, I hurt with them, I raged at them… God, I wanted to shake Alex sometimes, I wanted to knock some sense into Eli others, but the entire time, I was committed to this story—to their story.

As I am committed to this series. I cannot wait until the next book comes out—Wyatt’s book, which I have a burning (ha, firefighter pun!) need to read ASAP. Hopefully, by the time it comes out, I’ll have recovered from my crazy-assed flailing enough to start all over again… Get ready, Missy. We have a date with Firefighter Fox.
~ Review by Beth

If I lived in Chicago, Mayor Eli Cooper would have my vote. Sweet, baby Jesus—the man is sex on a stick, a former Marine and, good God, his smile melts panties and explodes ovaries… Yet, unfortunately, Eli’s managed to piss off the female voters and some very powerful unions in his bid for re-election.

Alexandra “Alex” Dempsey has something to prove—that she’s not just a pretty face but tough, strong and worthy to wear the badge and fight the fires next to the rest of the men at Engine Co. 6—including her brothers. Number one nemesis: Mayor Eli Cooper. No matter how hot and sexy he is, he’s stated his opinion on Alex’s abilities time and time again, and it’s not pretty.

The day Alex literally breathes life into Eli is life changing. Eli’s campaign is in the toilet—will he ride the coattails of the feel good story of the week to increase his numbers, or will Eli finally give into his desires for the gorgeous Alex?

Holy hell, this book—this series is AMAZING. The “love to hate you” relationship between Alex and Eli is funny, snarky, sexy, smart, romantic… I’ve run out of adjectives. I loved Alex and her spunk from the first book, Flirting with Fire. Cracked up over her use of the “Jaws of Life” and how it keeps coming back to haunt her. And Eli—where do I start? He’s a true politician. How he gets Alex on board with his pro-publicity plan is a riot. Loved the conversations he had in his own head.

And I can’t leave out Luke, Wyatt, Beck, and Gage, and Kinsey and Darcy. Alex’s brothers are ridiculously overprotective—the hospital and the benefit scenes made me laugh out loud. Kinsey and Darcy are the sisters Alex never had. They’re great for girl talk and helping Alex through the times when she really just needs a girlfriend, not an over-the-top, protective brother. I love their family dynamic.

I had to field numerous demands from Beth to stop whatever I was doing to start reading Playing with Fire so she had someone to talk to and swoon over Eli with. I should have paid attention—my five day delay meant Beth had the upper hand to claim Eli for her BBF. Damn it, now I’m going to have to beg for a share agreement. Though, I’d be willing to accept an advance claim for Wyatt in Sparking the Fire... (Beth’s note: NEVER going to happen! Wy’s already been claimed.)
~ Review by Missy 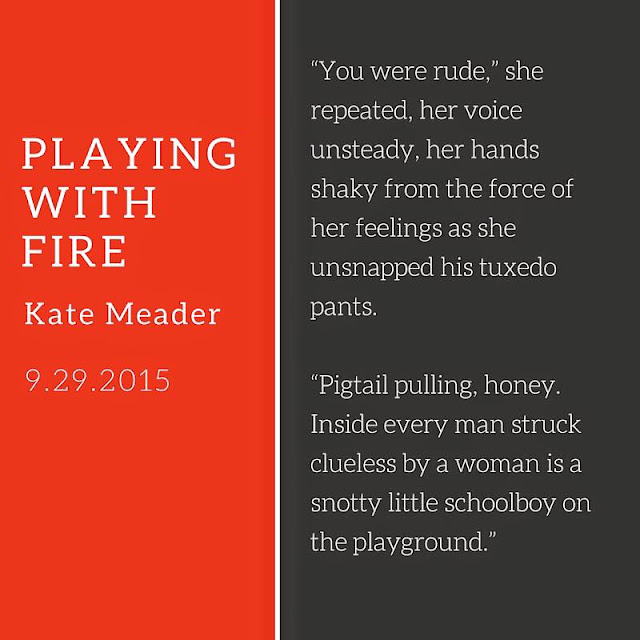 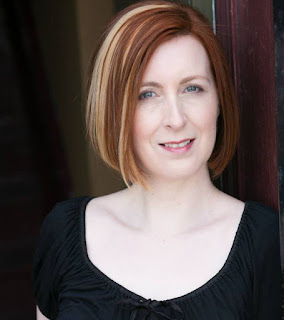 Originally from Ireland, Kate Meader cut her romance reader teeth on Maeve Binchy and Jilly Cooper novels, with some Mills & Boon thrown in for variety. Give her tales about brooding mill owners, oversexed equestrians, and men who can rock an apron or a fire hose, and she's there. Now based in Chicago, she writes sexy contemporary romance with alpha heroes and strong heroines who can match their men quip for quip. Visit her at KateMeader.com.