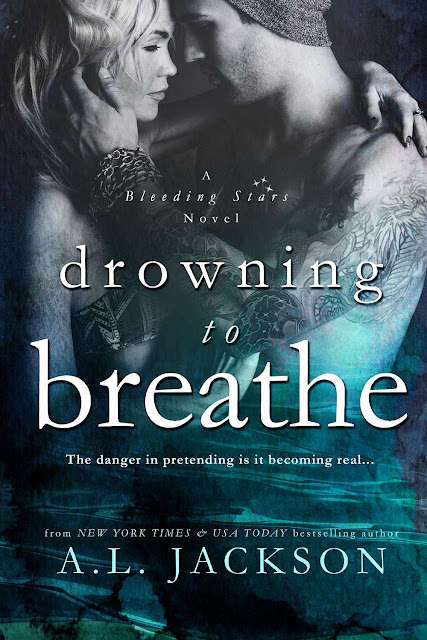 The danger in pretending is it becoming real...

Sebastian Stone, Sunder front man and guitarist with a rap sheet about ten miles long, escaped to Savannah, Georgia, to get away from the trouble he’d caused.

Not find more of it.

The moment he saw Shea Bentley, he saw beneath all her sweet and innocence to something that went deeper.

Their relationship was built on secrets; their love built on lies.

When the past and present collide, Sebastian and Shea find themselves fighting for a future neither believed they deserved. Their passion is consuming and their need unending.

Now, holding the truth in his hands, Sebastian is faced with sacrificing everything he’s come to love to protect Shea and his family.

Will their demons drown them or will Shea and Sebastian finally learn to breathe?

Drowning to Breathe is Book 2 in Sebastian and Shea's two-part duet. Their story begins in A Stone in the Sea. 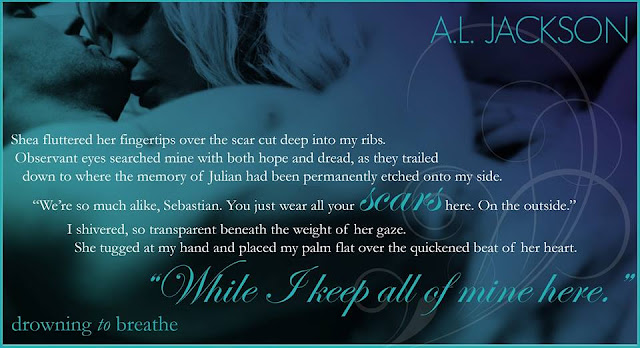 I don't have any idea where I want to start with this review. I'm all over the board with my emotions. There were many times I thought my heart was going to burst from loving Drowning to Breathe. There were just as many times that I had to set the book down because my dislike for it became over bearing.

While A Stone in the Sea was a true story, it was fluid and had content that made you blood sizzle and your heart weep. This story was more like a personal journal. One you weren't quite sure you should be reading. It was too personal. As if the thoughts you'd normally keep to yourself were on display for everyone to read.

Shea's and Baz's love bordered on being obsessive. It took over the story so much so that there was little content otherwise. There was a story, a sweet one, but AJ went into so much description about this all-consuming love that it became repetitive. We get it, they love each other, can we move on now?

There was also no break; when you weren't reading about their love, you were reading about some twist that was out-of-this-world huge. A normal person or relationship would break from the turmoil but somehow Baz and Shea grew capes because they experienced multiple issues. Huge ones. Their obsessive love story just kept trekking along. As a reading, it was exhausting. There wasn't a peak in the story for it to taper. It was just a constant assault.

I fell in love with Shea and Baz in A Stone in the Sea, and I couldn't wait to continue on their journey in Drowning to Breathe. Unfortunately, I felt like I was drowning a bit in the book.
~ Review by Kelly 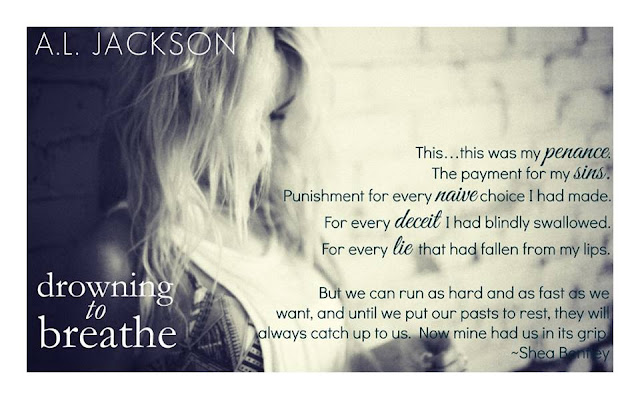 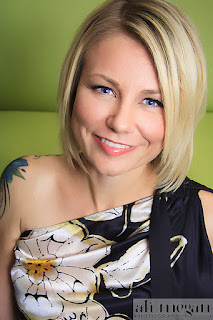 A.L. Jackson is the New York Times bestselling author of Take This Regret and Lost to You, as well as other contemporary romance titles, including Pulled, When We Collide, If Forever Comes, Come to Me Quietly, and Come to Me Softly.

She first found a love for writing during her days as a young mother and college student. She filled the journals she carried with short stories and poems used as an emotional outlet for the difficulties and joys she found in day-to-day life.

Years later, she shared a short story she’d been working on with her two closest friends and, with their encouragement, this story became her first full length novel. A.L. now spends her days writing in Southern Arizona where she lives with her husband and three children.