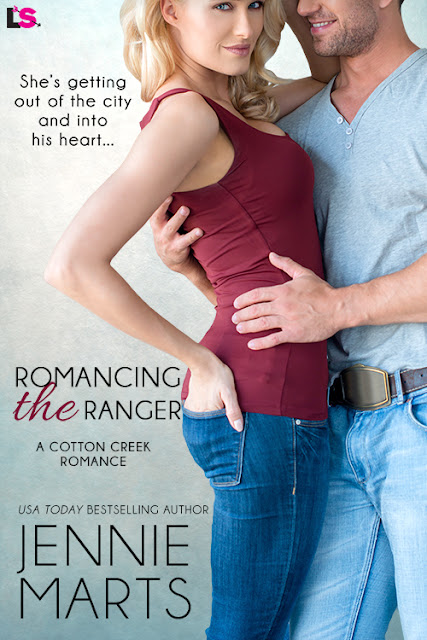 She’s getting out of the city and into his heart…

Reese Hudson meant to destroy mementos from her last failed relationship, not burn down an outhouse and incur the wrath of a sexy park ranger. When the judge rejects her offer to pay for the structure and sentences her to rebuild it—with the hot ranger supervising—she embraces the challenge to take control of her life.

Park ranger Wade Baker wants nothing to do with the rich city girl, no matter how tempting he finds her lush curves. She’s too much like his ex-fiancée, and if he’s learned anything, it’s that women like Reese don’t fit into his world. And he sure as hell wants no part of her big city life.

Reese may not know a hammer from a screwdriver, but she’s working hard to prove she’s not just some pampered princess to be toyed with. And damn it if Wade doesn’t admire her tenacious spirit. If only they got along half as well outside the bedroom as they do in it, there might be a chance for them after all… 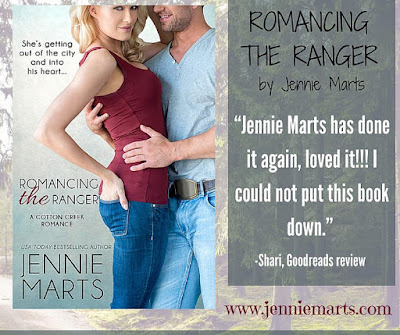 Any book that boasts fish puns and sex innuendoes among its attributes is my kind of book. There are few things in this world that I find as amusing as a pun—good or bad—and as hot as a few well-placed double entendres. And Romancing the Ranger had me covered on those fronts.

But...it also had me covered on the swoony, sexy and sweet front, too. Seriously, this book was a complete package of fun—quick, fluffy and humorous, with just a hint of tension to make sure boredom didn't set it. Basically, it was the perfect way to kill a couple of easy hours without taxing your brain...or your emotions.

Well, unless you count thigh-clenching as an emotion. Or, wait, maybe that's arousal I'm talking about. Whatever you want to call it, Wade and Reese had it in spades. They were a sparky pair—with enough chemistry and flirty, punny banter to make them easily lovable. I really liked this couple together, Wade with his insecurities and mistrust of Reese's money and motives, and Reese with her new-found freedom from control and desire to spread her wings.

This was, by no means, an overly deep story, and I was hoping for a little more at the end—it seemed to end rather abruptly—but what it lacked in depth, it easily made up for in spirit. And puns. Let's not forget those puns...
~ Review by Beth

If you are looking for a sweet and gentle romance then you have come to the right place!

Reese Hudson is a city girl who is at a crossroads in her life. Unfortunately, the path she takes includes an accidental fire and gross misuse of wine (sacrilege!). She has to rebuild the outhouse, which didn’t survive the wine or the fire, but how is the person who turned her in going to be helpful?

Wade Baker, park ranger, really didn’t want to help her; his hostility kept getting in the way. A bad relationship had soured him on any woman who even hinted at being rich let alone rich and city. Despite his frosty manner, Reese is intrigued by her sexy savior and is determined to make the best of her situation. If only Wade would get on board…

“This guy might just be one of the good ones that she was always hearing about.”

While the story doesn’t take it to the ‘Green Acres’ extreme with Eddie Albert and Eva Gabor battling with diamonds and pitchforks, I couldn’t help but see some similarities. The humor was certainly there!

“That was much more fun than holding the tape measure. Although I did notice your measurement changed while you kissed me.”

Reese is determined to have Wade like her, maybe even really like her, so her campaign to win him over is full on. No grand gestures or anything, but simply being herself and ensuring they have as much face time as possible, she is hoping she can tempt him into more than hammering… nails. I really liked how she was taking charge of her life, including how she was handling the men who had a lot to say about her choices. She was taking a stand and I kept cheering her on as she wrestled with what she wanted to do. I had a harder time warming up with Wade as he spent a lot of time bemoaning the past. He had a reason to be angry, he was definitely done wrong, but he did seem to spend quite a bit of time thinking, and talking, about it. On the up side, there were many moments in the story that just had me smiling—and Wade had his fair share.

“I do love a woman who can create a good fishing sex metaphor.”

Throw in a beautiful setting, an outhouse fire (which really made me laugh), a cute little pug, and this sweet romance had a unique flavor all of its own. Hmm, maybe it was the maple!
~ Review by Diane 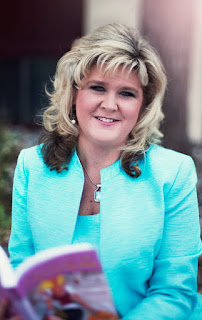 USA TODAY Best-selling author Jennie Marts loves to make readers laugh as she weaves stories filled with love, friendship and intrigue. She writes for Entangled Publishing and reviewers call her books "laugh out loud" funny and full of great characters that are "endearing and relatable." She is living her own happily ever after in the mountains of Colorado with her husband, two sons, two dogs and a parakeet that loves to tweet to the oldies. She's addicted to Diet Coke, adores Cheetos, and believes you can't have too many books, shoes, or friends.