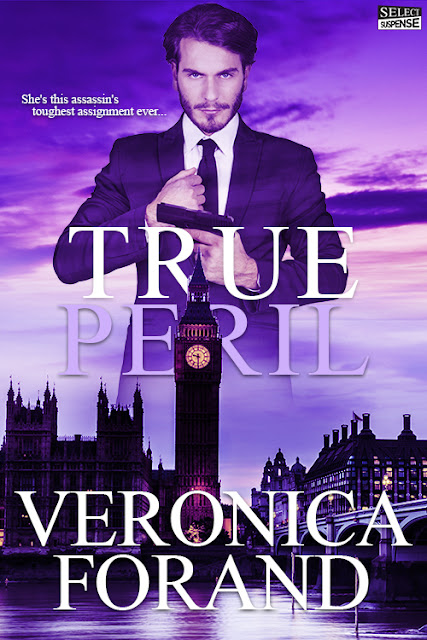 She's this assassin's toughest assignment ever...

Socialite Trista Patterson has turned her back on her life of privilege and dedicated herself to helping others. Her mission to protect the world’s children often takes her into the bleak and violent underbelly of third world countries. When a kidnapping attempt goes wrong, Trista quickly finds herself running for her life…and married to a man she just met…as she’s placed at the top of the Cartel’s most wanted list.

Dane O’Brien has spent his life in the shadows. Once a lethal assassin he grew tired of losing his soul with every hit, trading his gun and missions for a conference table and office politics as an undercover operative for the CIA. But when visiting his humanitarian sister turns deadly, Dane finds himself swearing to protect her beautiful and passionate friend Trista no matter the cost…even if it means stepping back into the world he swore never to return to. Although falling for the tough-hearted Trista is easy, keeping her alive is hard. 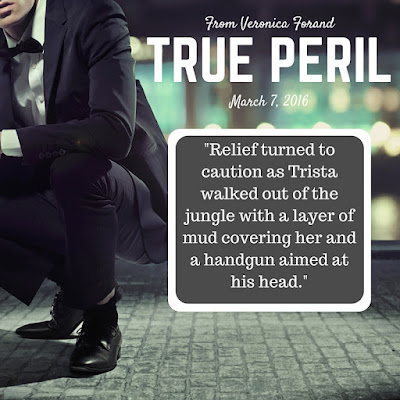 “You’re killing me,” he growled.
“No problem,” she murmured with her lips against his kin. “I’m really good at mouth to mouth resuscitation.”

Trista Patterson was used to being left behind so when Dane O’Brien seemed to be doing the opposite, she was curious. Could this man, despite their unusual start, be the man who stuck around for the long haul? Well, as long as she wasn’t murdered or anything….

Dane was not going to fall under the spell of a woman. Simon had fallen before him, and Simon’s brother, Henry before him. So what if they were all so sickeningly happy. He and his new ‘wife’ could enjoy each other for the short term, stay alive and then move on when the time was right. He wasn’t going to fall in love. Not going to happen!

Yah, I laughed too. This series excels at bringing together polar opposites in pairings that seemed heaven-made…eventually. Eve (formerly Trista) is trying to get used to her new name and the turn her life has taken. With danger stalking their every step, and even “friends” getting in on the action, her heart is in mortal danger. Especially when Dane doesn’t seem to treasure it as much as she hoped.

There is drama and angst among guns and criminals, but the danger to their lives is nothing compared to the danger they face from each other. Misunderstandings and twists and turns are going to have the whole crew debating their chosen professions once again.

Full of life and love, these characters and their stories are firmly on my favorite reads of 2016 list!
~ Review by Diane 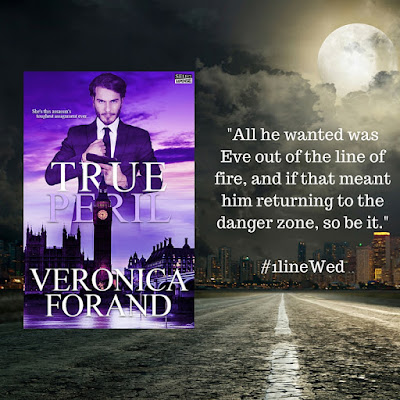 She’s on the run…

Brilliant art appraiser Alex Northrop’s ex used stolen art to fund his nefarious activities. Now he wants her dead. But it isn’t just herself she’s worried about – if he discovers who she really is, he’ll kill her family.

Professor Henry Chilton is shocked to find a beautiful stranger passed out in his bed, and even more so when she reveals a priceless painting is a forgery – the painting he’d planned to use to fund a woman’s shelter. She’s mysterious and frightened, and he is determined to discover why.

Alex's knowledge of art is undeniable—just as Henry’s attraction to her is irresistible. But in order to help him recover the real painting, Alex isn't just risking exposure...she's risking her life.

Hang on to your hats, folks, as this ride whips along at a fast pace! Alex Northrop is on the run, and we are taken along with her as she fears for her life. Her experiences did not prepare her for life underground but she is resourceful and quick on her feet. She has to be as the bad guy is a villain in the true sense of the word, threatening not only her but anyone she cares for.

Circumstance has her stumbling into Henry Chilton’s life, and into his bed, in an unlikely pairing. High society or Goth girl, Henry is intrigued as they soon become partners in business and also survival.

The plot is complicated and each page turns reveals even more to the story. Alex is surrounded by mystery, but Henry sees underneath the surface to the true woman beneath. Pink hair and Goth clothes may not automatically bring to mind a comfort with high-end art or their accompanying social gatherings, but Alex can’t hide her knowledge of both. She has to use her intelligence to evade her pursuers and figure out a way to keep herself and her new friend safe.

Her concern for those around her is just one part of her personality that you can’t help but like. Henry can’t resist her despite all the questions he has. The unroyal royal is a handsome, all-around good guy who Alex can’t resist. Neither can I, actually. He’s nice, incredibly so; the care he takes with his family and strangers in need putting firmly him on the ‘nice guy’ list. Of course, being sexy doesn’t hurt, either. There are hidden depths to this mind-mannered professor that, luckily, we get to see more of as the story races along.

This story is romantic and suspenseful, opening up an intriguing world of art and espionage. There is love and violence in equal measure so turn the light on and grab that glass of wine. Survival is a bumpy ride!
~ Review by Diane

Temptation. Seduction. Pleasure. It's all part of the game...and she's the worst player yet.

After his partner was murdered, Simon Dunn was done with MI6. But the cold, violent world of British intelligence never lets anyone go free. Now Simon has been blackmailed into a new job...with a beautiful new partner who's going to get them both killed.

Robotics expert Cassie Watson is a newbie field agent with as much sophistication as...well, a pacifist, vegan computer nerd. Now she's abruptly thrust into the cutthroat world of espionage with a partner who is as cold as he is brutally-and brutishly-handsome.

But when their mission is betrayed from the inside, Cassie will be forced to place her life in the hands of the one man who's anything but trustworthy...

Funny and deadly… a lethal combination!

This is the second in the series, and could be a stand-alone but you don’t want to miss one page of the epic-ness that is this series. That includes everything Simon. So stop, go read the first book. You will thank me.

And when you come back to this one, you will be glad you did. Simon is a complex character with many facets to his personality. We learned a lot about him already but he is not finished revealing the many different sides he hides from the world. From the kitchen to the bedroom to the world-stage arms trade, he is a chameleon, comfortable in whatever the situation may be. Cassie, however, seems to bring out traits he never knew he had. And didn’t want!

A more unlikely spy or agent I couldn’t imagine…

“Why the he** are you here? You obviously don’t like violence, and you have the seductive ability of a Teletubby.”

What Cassie was, though, was super smart and beyond endearing. Forced into a job as a field agent, she was clumsy and uncertain but, at the same time, honest about her strengths and weaknesses. An expert in her field, she was a guppy thrown into a shark tank with Simon as her only protector. She didn’t want to be in this situation but she had to muddle through and so would Simon… even if it did kill them. And that’s a definite possibility…

Whether it is navigating a meal, their sleeping arrangements or each other, there are smiles and gasps galore in this totally engrossing sirens-and-spies story. Seriously, I started reading and everything else just fell away. I didn’t lift my head for two hours and even then I didn’t want to leave this dangerous but completely mesmerizing world. Henry and Alex were back in action as well and they seemed to be even more fun the second time around…

The bad and good guys blurred in this heart-in-your-throat thrill ride with Simon solidly in a class of his own. He is a bruised and battered hero but that makes him only more swoonworthy. He and Cassie clash and duet with sarcastic humor and a protectiveness building on both sides as they unite to protect the innocent and save themselves.

A series that I am “all in” with and don’t want to leave!
~ Review by Diane 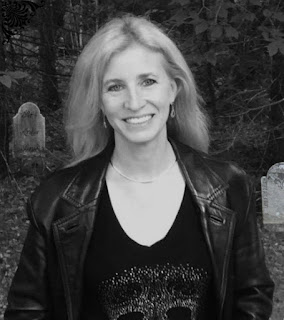 A Golden Pen winner in romantic suspense and a triple finalist in the Daphne Du Maurier Award for Excellence in Mystery/Suspense, Veronica Forand is an attorney and a novelist. She's lived in Boston, London, Paris, Geneva, and Washington, DC and currently resides near Philadelphia. An avid traveler, she loves to roam across continents with her husband and kids in pursuit of skiing, scuba diving, and finding the perfect piece of chocolate.

Read more about her upcoming releases and appearances at http://veronicaforand.com/ 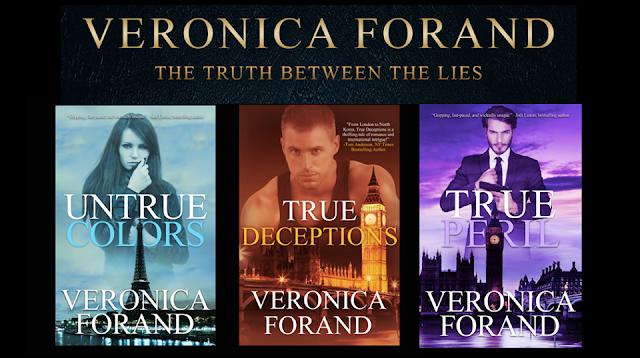