Blog Tour - Who We Are by Shanora Williams 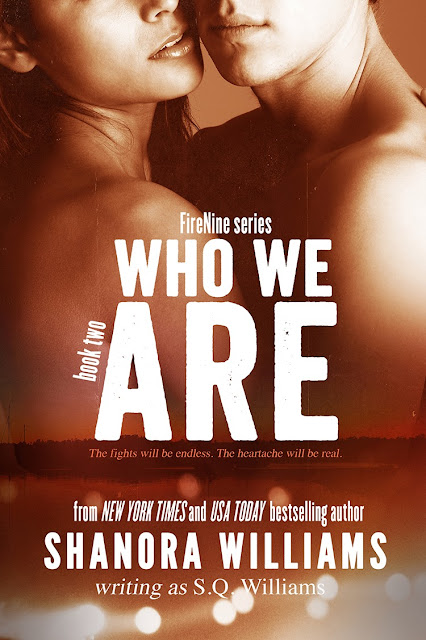 “I thought I had gone through something much worse. I thought the abuse and pain from my mom and step-dad was bad, but this? This heartache? This pain? This depression? This gut-wrenching, heartbreaking moment? This knotted up feeling in my gut, the tightness in my throat, the ache in my chest? It was slowly but surely killing me.”

That’s how long it’s been since Eliza last saw Gage and they both feel as if they don’t deserve one another’s forgiveness. He screwed up. She walked away without looking back. They’ll try and make up all the time they’ve lost with one another, that is until they’re facing the choices of either going their separate ways, or hanging on and fighting for dear life.

The fights will be endless. They heartache will be real. The demons will return, and they won’t back down without a fight.

There are some who will do anything to keep true love apart, and those same people will dig deep into their demonic ways until Eliza and Gage are literally no more.

Can Eliza and Gage overcome it all? Will they be able to face the true demons that are seeking to destroy them? Or will they just forget about everything they’ve worked so hard for and go their separate ways?

Sometimes you have to go through struggles in order to reach an ultimate point of peace… but will their struggle be worth it?

Ahh finally Gage Grendel is back! No worries ladies the ego inflated jerk only rears his ugly head very briefly. Thankfully Gage got that out of his system in the first half of Who He Is, instead this second installment picks up right where the last book left off. After Ellie walks away shattering Gage’s heart, she must face the music (literally she goes to their concert to visit her dad) and she is introduced to Fire Nine’s new song “We Don’t Give A Fuck!” I have to say this man definitely has a way of putting his emotions into his songs as is blatantly clear in the song:


I was surprised at the turn of events over the course of the book which made me love the ending even more. I am a sucker for HEA so thank you Ms. Williams for giving me a lollipop to shut me up! Fingers crossed that Roy and Montana get their own stories.

Shanora Williams was born and raised in Matthews, North Carolina. She's the author of the New Adult series, OBTAINED and the Best Selling New Adult novel, Hard to Resist. Her upcoming mature New-Adult/Adult novel, Who He Is, will be released in July of 2013.


When she's not writing, she's happily reading or watching cartoons like the big kid she is. She has a wonderful family that you will hear her brag and talk about all of the time. Whenever she just wants to get away from the words for a while, she'll spend some time with her loved ones, eat gummy bears, or drown in Coca-Cola and anything else caffeinated.