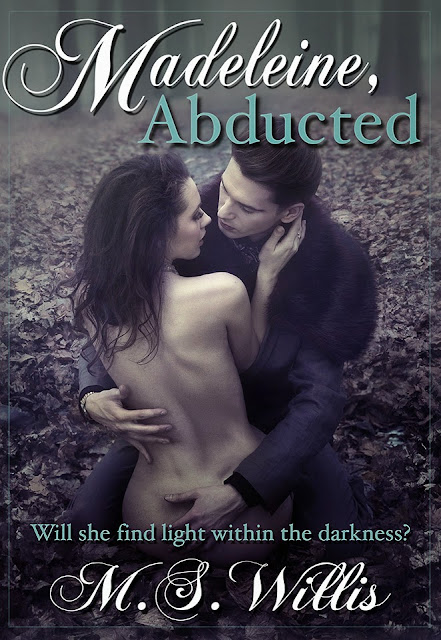 She was meant to be his destruction…

A pawn played in a perilous game between father and son…

Yet, her strength was more than either man could imagine.

As Maddy learns to save herself…

She becomes the one thing that could set the son free.

Madeleine Clark was raised to become a concert cellist. Sheltered and naïve, she remains hidden behind her music, a protection from the world around her. On the night of her first solo performance, Maddy accepts the admiration of a stranger and finds herself captive in a cruel and twisted power struggle between a sadistic father and his son, Aaron.

Seemingly, dangerous and uncaring, Aaron manages the business operations of his father’s estate. Wanting nothing to do with the slaves kept at the Estate, Aaron refuses to take part in the deeper depravities of his father. Despite his resistance, Aaron’s father ‘gifts’ him with a petite, brunette woman he can’t refuse.

A bond forged in conspiracy and deceit, Aaron struggles to save Maddy by teaching her to survive in the world in which he’d been raised. An unlikely union, Aaron soon learns that great strengths can exist within small packages, while Madeleine learns that love and light can exist in the darkest of places.

- Dark reads fans! *BAM* Stamp of approval!
- Captive romance addicts!
- If you’re in need of a cardio workout! ‘Cuz my heart rate was 250 per minute!

Wow. Wow. Wow. It’s been two days since I finished this book and I am still reeling from the explicit scenes, twisted and demented characters, and multi-layered story plot. This book has effectively blown my brains out.

Our heroine, Maddy, is a sheltered cellist and on the night of her solo performance, she crosses paths with Aaron, the dangerously sexy and mysterious man who presents her with a single rose. Maddy unknowingly accepts his gift and her fate is sealed. She is thrust into a game between Joseph Carmichael, the evil and sadistic father, and his son Aaron, the coldhearted killer and executioner for the Estate.

“You are now a slave. You caught the attention of the man to whom you now belong. You are to do as you are told without asking questions and you are to follow instructions exactly as they are given. Obedience is demanded from this point further. Any infraction on your part will have dire circumstances. Do you understand?”

Aaron constantly struggles from being consumed by the same darkness that has infested his father. He is the Executioner, the Lawmaker, the Killer, the Enforcer, and with every act, every kill, he loses a piece of his soul, but is still able to retain his sanity. He needs control and to him, Madeleine is the temptress, the means of destroying him if he caves into his desire, and the ultimate decision that will allow his father to control him.

Yet…there is no staying away, for Aaron and Maddy are bound together in their love for music, creating a thin thread that connects their two hearts and souls in a world full of darkness and pain.

“It wasn’t just music that was elicited from the combination of wood, metal, and Madeleine, it was emotion, thought, a message only understood by those who could appreciate the fine combination of the sea of notes, blended together into an intoxicating song.”

The plot twisted, their battles epic, and there wasn’t a single moment I was left expressionless. Half of the time I was screaming and tearing my hair out, and the other half was a combination of crying and curling up in a corner to get away from the wickedness that emanates from this book. I cringed, I swore, I sobbed, but the feeling that dominated my emotions was fear. Fear that they wouldn’t survive, fear that the monster would overtake them, fear…

Just so you can see how the book builds up in tension and action, here are my spoiler-free status updates I posted while I was reading the book. 1%: YEEEEEHAAA!!! Story not for the faint of heart? No light? Abduction, enslavement, darkness? MY KIND OF BOOK!

6%: What did your Mama teach you Madeleine? Never talk to strangers, that’s what!

21%: Just WHAT is father and son playing at?! Never mind Madeleine, I might have a mental breakdown

69%: Oh my motherfucking lord. This is SO MUCH WORSE than 100 pages earlier. Praying on my knees now. I’m so terrified I can’t read on!!! Somebody do something!!!!

93%: Scratch that last update! THIS IS IT. Of course she saves the best for last *super-cringe* I’M GOING TO JUMP OFF A BRIDGEEEE. I need help!!!

So there you have it folks. A dark romance that is a must-read! The heart attack and near death experience is totally worth it, I assure you! *grins*

M.S. Willis is a romance novelist whose debut novel, Control, was released in 2013.  Although currently writing in the romance genre, Willis has plans to expand her literary pursuits into multiple genres and has no fear conquering difficult subject matters in her writing.  Willis is a native Floridian who is also a photographer and musician.  When not absorbing herself in written, visual or musical expression, Willis is an adrenaline junkie, a ‘closet’ video game enthusiast, and an avid outdoors person and nature lover.

a Rafflecopter giveaway
Posted by Give Me Books at 1:49 pm