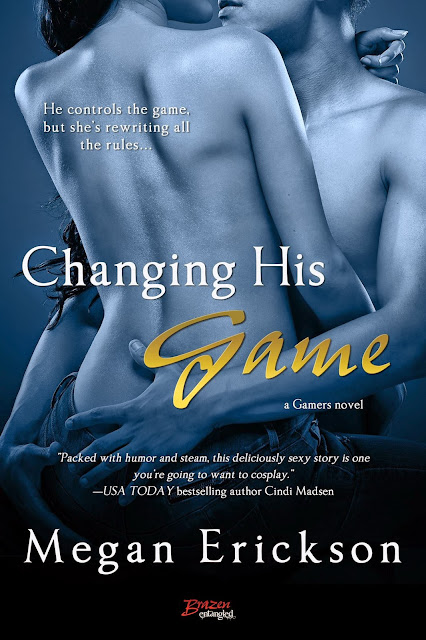 He controls the game, but she’s rewriting all the rules…

Marley Lake is no stranger to awkwardness, but getting caught watching a dirty GIF by the company’s hot new IT guy exceeds even her standards. That is, until she realizes he's as turned on by it as she is. But with a big promotion on the line, she refuses to let her current dry spell be her downfall. Maybe.

Austin Rivers has no business lusting after the irresistible editor of Gamers Magazine. He's a secret partner in the business—and technically Marley’s boss. One look at that GIF, though, and he’s ready to install a whole lot more than just software…as long as she never finds out who he really is.

But reality’s not as virtual as it seems, and when Austin’s identity jeopardizes Marley’s promotion, he has to change his game or risk losing the only woman with the cheat code to his heart.

I'm not entirely sure what just happened, but I think I fell in love with a socially awkward, dominant dork of a hot man. Nothin' wrong with that. Nerds are sexy, y'all.

Marley Lake is no stranger to control. In order to rise through the ranks of the male dominated Gamers magazine, she's had a firm grasp on all aspects of her career and her life. But when her co-worker finds a dirty GIF while repairing her computer, control seems to fly out the window.

She knows dating someone she works with is risky. What she doesn't know is Austin Rivers is more than a co-worker...he's also her boss.

Holy mother of sweet baby Jesus in a basket!! Yeah, that's a mouthful but, um... Hot. Changing His Game was so very, very hot! Better yet (I guess... I mean, I do love my romance dirty), it was a super fun, fresh story with a kick-ass female lead...that wasn't afraid to lose control. Mostly.

I loved the premise of this book. As someone that *ahem* discreetly frequents Tumblr for the sexy GIFs, I sympathized with and then envied Marley. I can absolutely see this happening -- getting sprung with your smut showing -- and the way Ms. Erickson spun it into a love story, complete with nerdy gaming references and cosplay made for a funny, playful read.

I really, truly hope there are more stories to come from Ms. Erickson with nerdy, dirty, sexy men to swoon for. I'm really, really getting into the idea of geek love.

Marley Lake is driven—driven by her desire to succeed in a “man’s world”, almost to the point where she’s working herself to the bone. Needing some IT support, Marley forgets the dirty GIF she watched during a much needed break is still open on her desktop...

Austin Rivers can’t believe his luck (or his eyes) when he sees the GIF on Marley’s machine. Hiding in plain sight as secret partner in Gamers magazine, Austin knows better than to mix business with pleasure, but he can’t control his lusty thoughts about Marley.

But Austin’s lies of omission about his real role in the company jeopardize not only his relationship with Marley but also her promotion. He just hopes and prays she doesn’t find out the truth before he has a chance to explain.

I loved Austin and Marley. Their quirky, geeky awkwardness endeared me to both of them. Austin and his quiet, closed self, doesn’t really like or trust people. Marley has been busting her ass trying to prove her value to the world and hasn’t left herself open to a real relationship. Neither of them know how to “have a relationship” but they try and fail and try again. And I love them for that! Together they are hot--hot and sexy. Did I mention sexy hot? *fans self*

And I also love Marley's brother, Chad, and Austin's best friend and business partner, Grant. Chad never leaves Marley's side--always has her back, through thick and thin. And Grant is more like a brother than a friend--but Austin almost doesn't see the realness of their relationship until he almost loses it. Thank you, Ms. Erickson for bringing a bit of geeky hotness to world.

Megan Erickson worked as a journalist covering real-life dramas before she decided she liked writing her own endings better and switched to fiction. She lives in Pennsylvania with her husband, two kids and two cats. When she's not tapping away on her laptop, she's probably listening to the characters in her head who won't stop talking.