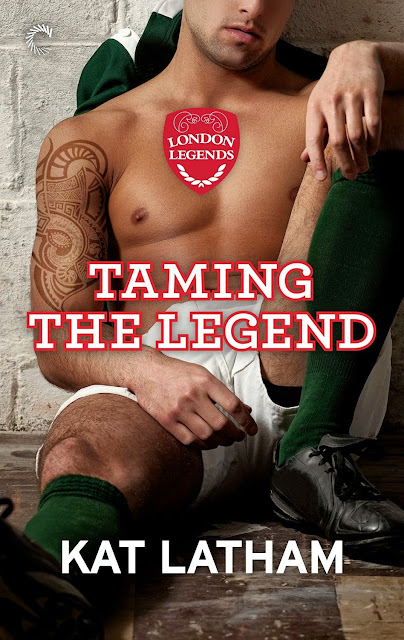 When retiring rugby star Ash Trenton considered his next career move, coaching troubled teens at his ex-girlfriend’s California camp wasn’t on the list. But when Camila Morales reappears after eighteen years, begging for his help, he can’t say no to his first and only love.

Camila was just sixteen when Ash moved on to start his rugby career, leaving her heartbroken…and on her own to make a life-changing decision. Now she needs his help to win a tournament prize and save her camp. Relying on Ash is the last thing she wants. But while it’s hard to get over being dumped for a sport, it’s even harder to ignore the rush of attraction that has only gotten stronger after so many years apart.

Coaching teens is the hardest job Ash has ever had, and the task becomes personal when he begins to fall for Camila all over again. But when he is offered his dream job, will he choose the job—or the woman whose heart he already sacrificed once?

Oh, how I love this series. I've been waiting on Ash's story since I closed my first London Legends book (which is actually the second in the series), Playing It Close, and it was, without a doubt, worth the wait.

Life after retirement is a mystery to Ash Trenton. With no idea what his next move will be, he's nonetheless surprised and a little unwilling when his ex -- the only woman that's ever truly been a distraction from his first love, rugby -- shows up asking for his help to save her floundering Californian camp.

Camila Morales had to swallow her pride to approach Ash, all in the hope he can coach her troubled teens to victory and a huge payout. After he broke her heart, and left her on her own to make a tough decision, Camila isn't exactly Ash's biggest fan, but he's her only chance, and she's hoping he's up for the challenge.

Working together reignites old feelings in both Ash and Camila, and it's hard to ignore. But Ash already chose his sport over her once, and when his dream job becomes a reality, Camila has to face the possibility that, once again, Ash will sacrifice her heart to make his own dreams come true.

Taming the Legend may just be my favorite book in this series. It's been a couple of days since I closed it and I am still thinking about it. Still thinking about Ash and Mila and their second-chance romance. I was a little apprehensive when I read the blurb, mainly because I've kinda...sorta...ok, totally crushed on Ash from the start and I wanted his story to be good. No, I wanted his story to be great, just like him. And it was.

Kat Latham has written a story that is funny, sexy, sweet and a little bit sad. As I've come to expect from her, she gave me laugh-out-loud moments, moments that made me smile big and small, and moments that made my brow furrow and my heart ache a little. I couldn't help but love Ash and how his handled the life-changing news that Camila presented him. I couldn't help but swoon over how he charmed and courted and loved Mila. I couldn't help but laugh at how he bantered with his new players, how he trained and led them, how hard he work for and with them. Oh Ash, I can see why you were Tess' favorite before Liam.

One of my favorite things about this series is the dynamics between all of the London Legends players, and while Ash is retiring, that is far from absent in this book. There are some excellent moments with the guys, and it made me hunger all the more for additional books in this stellar series. I am hoping that Hardy is next -- the carry-over of his secondary story from Tempting the Player, and the flashbacks to his shared youth with Ash, have me a little crazed at the thought he can and will get his own moment. *crosses fingers* Please?!

This series will always be a little special to me, because it's the first one I reviewed for Give Me Books. But more than that, because it is one I know I can count on to make me feel all the good feels while reading. And that is truly why I FLOVE this series.
~ Review by Beth