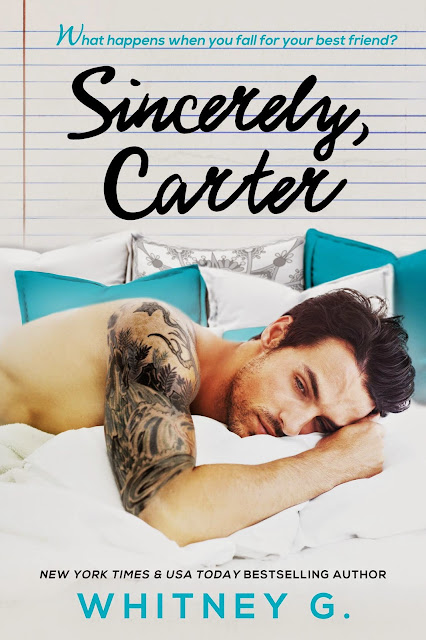 Arizona Turner has been my best friend since fourth grade, even when we “hated” each other. We’ve been there for one another through first kisses, first “times,” and we’ve been each other’s constant when good relationships turned bad. (We even went to colleges that were minutes away from each other…)

Throughout the years, and despite what anyone says, we’ve never crossed the line.

Never thought about it.
Never wanted to.

Until one night changed everything.
At least, it should’ve ...

Just friends.
We’re just friends.
I’m only saying this until I figure out if she’s still “just” my best friend…

Carter and Arizona, what a pair of best friends they were! Before they were friends though, they were enemies, enemies that had no love for one another.

The beginning of the book had me cracking up so hard I was crying. The "heartfelt" letter Arizona wrote to Carter is what got them together but will the letter Carter has for Arizona keep them together?

Carter has had bad luck in dating, he always seems to find the crazy psycho ones and he just doesn't get it. Arizona, on the other hand, has the commitment issues. She just can't get it together and she wonders why she can't keep a boyfriend.

Carter and Arizona's friendship has survived the test of time and they have always been there for each other but, as they wonder why they can't seem to get what they are looking for, they overlook that maybe, just maybe, what they’re looking for is right there in front of them.

The banter between them was sweet, funny, hot and emotional. It had me wishing that they’d get their shit together and see that they were made for each other. There is a part towards the end that had me yes-ing when Carter goes all Alpha on Arizona and my goodness, she wasn't the only one "soaking wet"!

Sincerely, Carter is a different book from all of Whitney's others, unique in its own way, but I love it, just like her other books.

A self diagnosed candy addict, travel junkie, and hypochondriac, Whitney Gracia Williams LOVES to write about characters that make you laugh, cry, and want to (in the case of Selena Ross) reach through your Kindle and slap them. She is the "imaginary bestselling" author of the Jilted Bride Series, Mid Life Love, Wasted Love, and Captain of My Soul. When she's not locked inside her room, feverishly typing away on her laptop, she can be found here: http://www.whitneygracia.com She also loves getting emails from her readers, so if you want to tell her how much you loved (or hated) her stories, email her at whitgracia@gmail.com