Review - Forever You're Mine by K. Langston 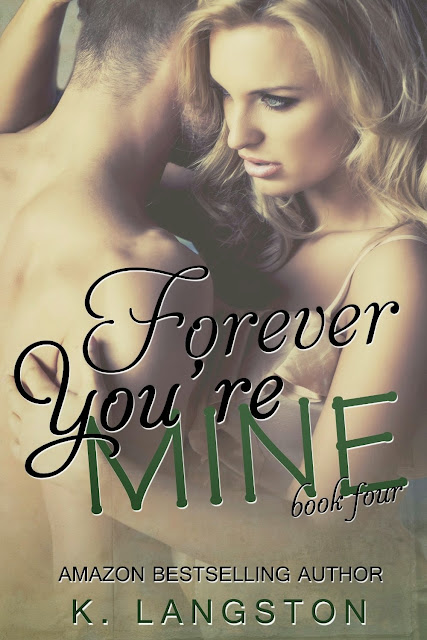 Cannon Jacobs has a past he wants to forget. The former Navy SEAL has seen his fair share of death and despair, and he would love nothing more than to escape the hell that tortures him. But no matter how hard he tries, Cannon has never been able to quiet the angry demons inside of his head.

Then he met her.

Cora Daniels’ life has never been pretty. Actually, it's been downright ugly at times. But when you come from the trailer park, and your mother’s reputation is nothing more than a stain on your name, it makes it hard to believe you’ll ever find true happiness. Yet, Cora lives with the hope that someday, she’ll find the love she deserves.

Sometimes the love you find is not the kind you hoped for.

You never know when love will come along and change...everything.

First of all, I've read all the books in this series and they are freaking hot!!

Cora's past is anything but pretty; in fact, many would say it's trashy, yet she's trying her best to make the best out of it. Cora is determined to not let her mother's legacy ruin or dictate her future, and her good friend, Cannon is always there to remind her that she is worth more than she gives herself credit for.

Cannon fucks to forget the pain he goes through every day. With Cora, he knows he wants more but is afraid to damage their friendship. Cora wants Cannon to open up to her so she waits patiently for that day, and while waiting they both realize that what they have been looking for has been there right in front of them all along.

Once Cannon and Cora decide to give it a try… Whew, let me tell you, my tablet was throwing out smoke and I was in need of a cold shower.... K. Langston, damn, do you know how to write a scorching hot story!! I won't say they have an easy road to happiness because it was a hell of a ride, especially with people wanting to separate them at any cost, but the ending had me getting teary eyed and wishing their story didn't have to end. 5 HOT stars.

K. lives in the boonies with her adoring husband, their two beautiful children and a speckled beagle named Sadie. To find out more about K. go to www.authorklangston.com

Email ThisBlogThis!Share to TwitterShare to FacebookShare to Pinterest
Labels: 5 Stars, Forever You're Mine, K. Langston, Mine Series, Review