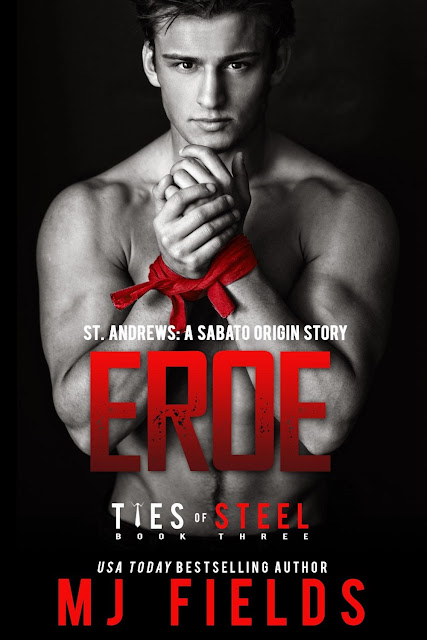 Sabato Efisto was born from an unholy union, the bastard son of a martyred saint and the Devil. At least, that's what he's believed, for most of his life.

His father is an Italian crime lord, a man so dangerous that Sabato's mother died trying to get away from him. For that tragedy, which happened on his seventh birthday, Sabato blames himself. Every year, he practices the ritual of self-punishment, flirting with death the way most boys his age flirt with girls.

Until ten years later, when he meets a sweet girl named Luciana, at St. Andrews of the Holy Cross. For the first time in his life, Sabato doesn't want to end it. The darkness in his soul is replaced by hope. But, as the priests will tell you, the sins of the father are not easily escaped.
And those who are born into darkness, must carry that cross forever....

Eroe is the prequel to Sabato, and it helped me to see how Sabato grew up and how it affected him on all levels.

There was a time when Sabato was an Eroe (hero) to someone, yet the hate they had towards him caused the loss of that individual. From that point forward, he was no longer an Eroe to anyone...

I loved seeing that someone like him was capable of loving at one point in his life. There was so much pain and hate in Sabato's life that, at times, it was hard to read because he would only display those feelings towards those around him, especially to those who showed him love.

The mere mention of the name Salvatore Efisto, a notorious crime boss in the Sicilian Mafia, was enough to make any man seek their quickest escape. When his body washes up on the Jersey shore, there is one suspect who the authorities will stop at nothing to find.

Raised and reared in the Cosa Nostra, Sabato Efisto has seen crime, chaos and destruction his entire life. When he fell in love, his heart beat for the first time. However, his father made sure that the young prodigy he was creating, was no longer distracted.

Sabato took refuge in clubs, sex and control. His connection with women on an emotional level was a luxury he could not and would not allow himself.

Valentina Segretti helps him hide from those searching for him. The sexual tension between them boils until finally it explodes into page scorching sexual… scenes.

Melyssa, a friend of Valentina’s, returns to Jersey and finds him in hiding. As a law student she offers advice to Sabato. The attraction between them is much different than his to Valentina.

Two women, who could not be any more different from each other, and one man, who is literally fighting for a life he never knew he could dream of having.

Will he choose one, or will he return to Italy as head of the Sicilian Mafia?

This is a sexy, dirty talking, Italian Alpha Man and he had me squirming and clenching my legs throughout the entire book!

Sabato has been patiently waiting to set his plan in motion; to seek revenge on his father and those that have been helping him and to claim what is his, but he knows he can’t do it alone. As he gets help from the Steel Men and Dominic to take down his ruthless father, Sabato runs into a Southern Belle who has him rethinking his life…

Whoa! The chemistry between Melyssa and Sabato is freaking hot so make sure you have ice cold water and a fan to cool yourself and your Kindle/tablet! While reading their story, I could feel the hatred Sabato had for those that had taken from him, as well as why he felt unlovable. And yet, I could also see the inner battle he had with himself over the feelings he had for Melyssa.

I loved seeing the feistiness as well as the love Melyssa was developing for Sabato. Deep down, she knows he is capable of loving despite everything he's been through, and she makes it her mission to show him.

I must say, MJ Fields, you caught me off guard towards the end; there were some secrets coming out that I definitely did not see coming, so bravo for throwing those curve balls! A beautiful love story about second chances at life, love and forgiveness!

MJ Fields's love of writing was in full swing by age eight. Together with her cousins, she wrote a newsletter for family members. The newsletter was put back into 'publication' in September of 2001 for the entertainment of her cousin on a Navy aircraft carrier in the gulf, (Her cousin is a female Navy officer and helicopter pilot).

Ties of Steel, (the first series spun off of some the Men of Steel series) book 1 ABE and book 2 Dominic are now available. The Norfolk series, has two titles available now, Irons 1 and Irons 2.

MJ is an Amazon bestselling author in multiple categories as well as all of Amazon as a whole. She lives in central New York, surrounded by family and friends. Her house is full of pets, friends, and noise ninety percent of the time, and she would have it no other way.