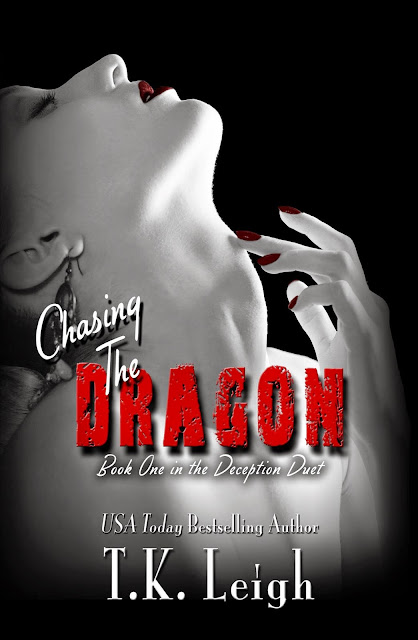 He’s trying to protect his heart…
She’s a shell of the girl she once was…
Can he chase away the demons threatening to destroy her?

Mackenzie Delano craves control. After tragedy strikes during her freshman year of college, she compensates for the helplessness she felt by micro-managing every aspect of her life, from her business life to her social life…to her love life. But she wasn’t expecting to cross paths with a mysterious man who seems to invade her every thought.

Tyler Burnham has been living his life with one rule in mind…never fall in love. Focusing solely on his career, he is able to remain a detached observer of life… Until a case is dropped in his lap, forcing him to form an intimate relationship with a sharp-tongued woman in order to obtain the location of a man deemed an enemy of the State.

When Tyler finds himself falling for Mackenzie, will he be able push his feelings aside and recover the information he needs? Or will he put the mission and their lives at risk to follow his heart?

Chasing The Dragon is the first installment of a two part series of deception and betrayal where nothing is as it seems.

***Note - Chasing The Dragon is the first book in a two-book duet and is a spin-off of T.K. Leigh's USA Today Best Selling Beautiful Mess series. It is not necessary to have read that series in order to read this duet, but it will contain a mild spoiler from the third book in the Beautiful Mess series, Gorgeous Chaos.*** 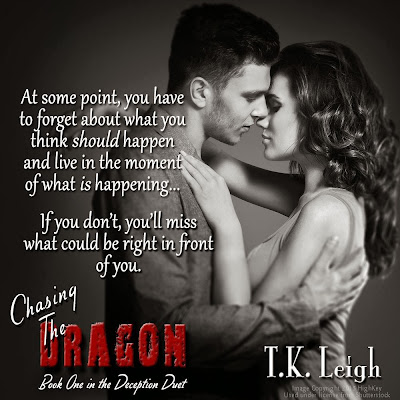 WTF did I just read? T.K., you have written a complete mind fuck, and I loved it!

So Alexander’s brother, Tyler is our main man in this book. They have been asked to find someone. Easiest way? Seduce the one who knows where he is and get her to spill his location.

Mackenzie has a secret. She knows where he is, but trusts no one. When Tyler sweeps into her life, she feels a connection to him she has never felt with anyone before.

Add in a crazy ex (who I still can’t decide if I like/trust him), crazy phone calls, break-ins and Tyler’s lies, and you have the recipe for a complete and utter mind fuck like no other.

I loved the characters. And I am still not sure who the bad guy is, so I am anxiously awaiting book two. I honestly think the only reason I didn’t throw my Kindle at the end was because TK apologized. Seriously, she did! She knew she was messing with us, and she liked it. But that’s okay, I think you all will too!

Chasing the Dragon by T.K. Leigh was complex, mysterious and sexy.

Mackenzie Delano is a twenty-something on the brink of reaching her dream of opening her own restaurant when Tyler Burnham walks into her life. Nothing is ever as it seems with the Burnham boys, as we know from the Beautiful Mess series, and that hasn’t changed with Tyler. He’s a hot, hunky, somewhat mysterious Boston boy, who’s hanging out in South Padre Island where he meets Mackenzie. From this point forward her world is forever changed.

Feelings are brought back from the depths of being hidden away, Mackenzie and Tyler find love, but things aren’t always what they seem.

I love that TK Leigh doesn’t write a simple, straightforward romantic book. True to form, her book has mystery, intrigue, romance, hot sex and complex characters. The supporting characters are well developed, funny and loving. I would have given it a five, except for the cliffy at the end… but alas, now I’m on pins and needles waiting to see what happens next!

T.K. Leigh, otherwise known as Tracy Leigh Kellam, is a producer / attorney by trade. Originally from New England, she now resides in sunny Southern California with her husband, dog and three cats, all of which she has rescued (including the husband). Her debut novel “A Beautiful Mess” has garnered relative praise, having been an Amazon Best Seller, as well a Number 1 Best Seller in Romantic Suspense, Women’s Action and Adventure Fiction, Women’s Crime Fiction, and Women’s Psychological Fiction. Recently, the book was named by The Guardian as a top reader-recommended self-published book of 2013 as well as a 2013 Reader’s Favorite in Publisher’s Weekly in addition to being named an Amazon Romance Editor’s Fan Favorite for Top Debut Author and Best Page Turner. The sequel to “A Beautiful Mess”, entitled “A Tragic Wreck”, became an Amazon Top-50 Best Selling Book on the day of its release. It is also an Amazon Number 1 Best Seller in Women’s Sagas, Women’s Psychological Fiction, Women’s Action and Adventure Fiction, and Women’s Crime Fiction. When she’s not planted in front of her computer, writing away, she can be found running and training for her next marathon (of which she has run over fifteen fulls and far too many halfs to recall). Unlike Olivia, the main character in her Beautiful Mess series, she has yet to qualify for the Boston Marathon.