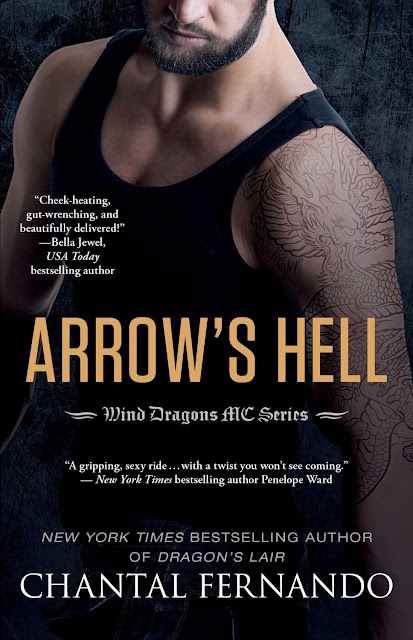 From bestselling author Chantal Fernando, the second book in a sexy romance series featuring the bad boys of the Wind Dragons Motorcycle Club and the women who fall in love with them.

Being the younger sister of a Wind Dragons MC member isn’t as great as you’d think it would be.

I can’t escape the details of my brother’s exploits.
No one tells me anything.
Men who know who I am tend to stay away from me.

And worst of all:
The members of the MC are off-limits.

When Arrow catches my eye, I make it my mission to make him happy again.

When I fall head over heels in love with him, I just hope he will be there to catch me.
And that my brother doesn’t kill him. 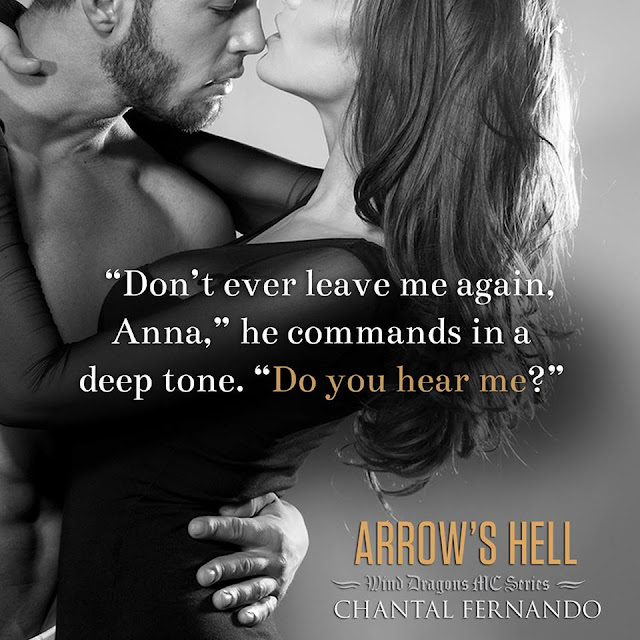 Biker books are one of my favorite types of books to read. So when I read Dragon's Lair, I loved it. We met Arrow in Dragon's Lair, and after that I couldn't wait to read his book! And let me say, Arrow's Hell didn't disappoint either.

"I know I'm held back by my own demons, my own guilt, but I don't deserve my redemption."

Arrow, oh Arrow, I felt so bad for him for what happened back in Dragon's Lair. It's now five years later, and he still struggles with the guilt. He hasn't been able to move on, and isn't the same guy he was back then. He doesn't really smile or laugh anymore and is mostly grumpy. Once Anna is in the picture, she tries to make him smile and be happy again.

"Have you ever seen someone for the first time and just wanted them? Something about them attracts you, like a moth to a flame, without rhyme or reason. Every time I look at Arrow I feel that pull."

Anna is the sister of Rake, one of the Wind Dragons MC members. Since she has now moved back to town, Rake has taken it upon himself to look out for her. She doesn't like having babysitters, though she doesn't mind Arrow...

"Arrow is my guilty pleasure, something I know I shouldn't want but want anyway."

Since Arrow is one of Rake's MC brothers, he is supposed to be off-limits. Though that doesn't stop Anna from wanting him… Will Arrow be able to get past his guilt to be able to have something with Anna?

I loved this book. One part in this book really shocked me as I didn't see it coming at all. It was a great twist and made things interesting. It was awesome to catch up with Faye, Dex, and Tracker. Tracker was a great friend to Anna in this one, and I can't wait to read his book!
~ Review by Leah 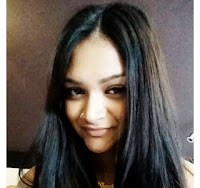 Her published novels include four books in the Resisting Love series – Chase, Kade, Ryder and James; the New York Times Bestselling novel Maybe This Time and its follow up, This Time Around. Her latest releases include Toxic Girl, Saxon, and a USA bestselling biker romance novel Dragon’s Lair.

When not reading, writing or daydreaming she can be found enjoying life with her three sons and family.