Review - That One Night by Josie Wright 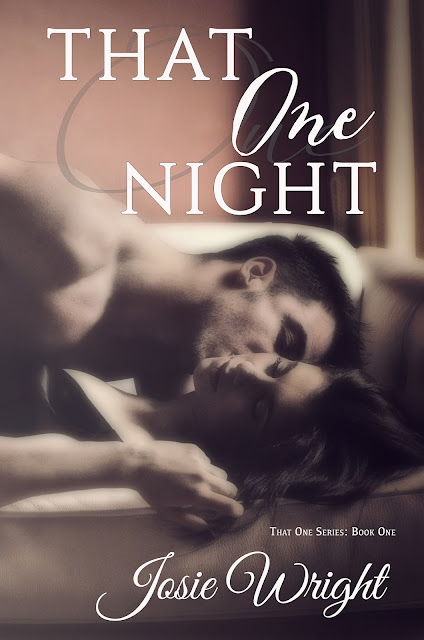 All it takes is just one moment to change the course of your life. For me, it was one perfect night.

I have always had a thing for my brother’s best friend, Ben. When I found him on my parents’ couch, drowning his sorrows in a whiskey bottle, my attempts to comfort him quickly turned into a night of raw and intense passion.

My foolish heart hoped he might feel the same way I do.

But Ben wasn’t there to stay and I woke up the next morning alone with a broken heart.

I attempted to forget the guy with a smile to die for and a touch that sets me on fire.

I thought I was over him.

I thought he was gone forever.

Until, eighteen months later Ben returns and learns my secret. Now, he is hell-bent on winning me back.

And he won’t stop until he gets what he wants—me.

But he has secrets of his own. 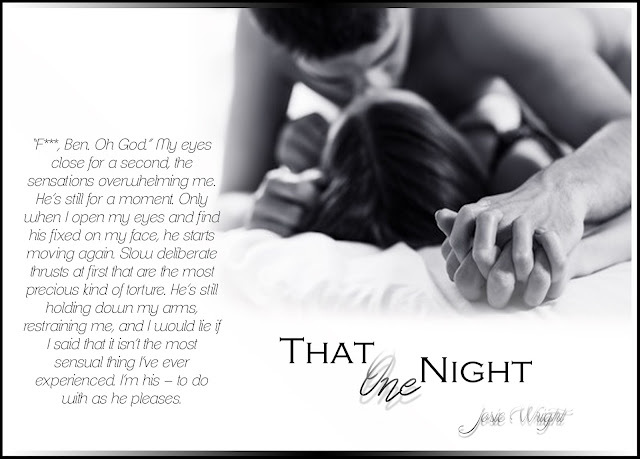 One night is all it took to alter Frankie's life, yet she would never change it because that meant she has a piece of him with her forever. For as long as she can remember, she's had a crush on Ben but he wanted nothing to do with her because he viewed her as his little sister.

Ben's life has been a lie and that sends him on a spiral of destruction, wanting to have nothing to do with anyone, especially his mother. When he comes back, he tries his best to let Frankie know what's been going on, to earn her trust again and prove to her that he's back for good...but only time will tell if it’ll work.

Now, the chemistry between Ben and Frankie was sizzling and tempting! Reading on how Ben was really trying to be there for Frankie was sweet yet I could tell Ben was still keeping secrets from her and due to that, their relationship could only move forward so far. There were some twist and turns I did not expect that had me mouthing, ‘WTH?’

This was an enjoyable story that, once I started reading it, I couldn't put down because I wanted to see how it ended.
~ Review by Kara 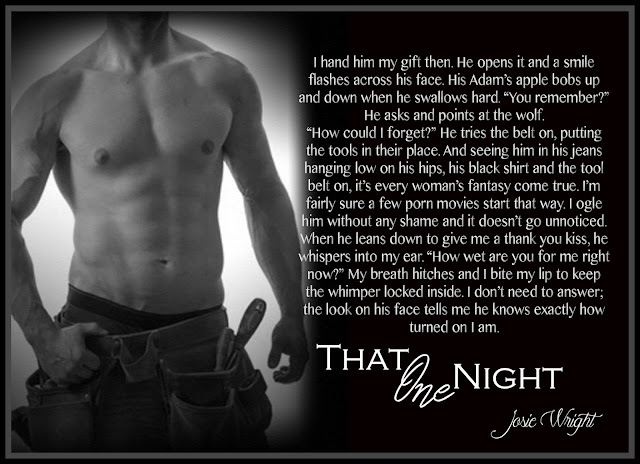 Josie Wright has always been a bookworm, spending every free moment with her nose buried in a book. While others were out partying, she spent her evenings with Heathcliff, Sydney Carton or Snape. Romance, fantasy, thrillers - you name it, she read it.

Thanks to the Kindle, she finally arrived in the 21st century and discovered the Indie literature world. Josie has been lost to it ever since. With her love for the written word and her promiscuous feelings for countless book boyfriends, the next logical step was to start writing. The voices in her head and her imaginary friends wanted out to play and so she wrote her debut novel "That One Night", that's to be released early summer 2015. And the good news is, there are more voices and imaginary friend where Ben and Frankie came from.

Josie is a financial expert by day and a writing junkie by night. The rest of the time she's a bit of a hippie, a bit of a goth and many things in between. Josie loves to spend time with her husband when she can tear herself away from her book boyfriends. She loves video games, movies, good food and even better music. She's addicted to chips, long baths and shoes. Oh, and books of course. Definitely books.

Email ThisBlogThis!Share to TwitterShare to FacebookShare to Pinterest
Labels: 4 stars, Josie Wright, Review, That One Night, That One series