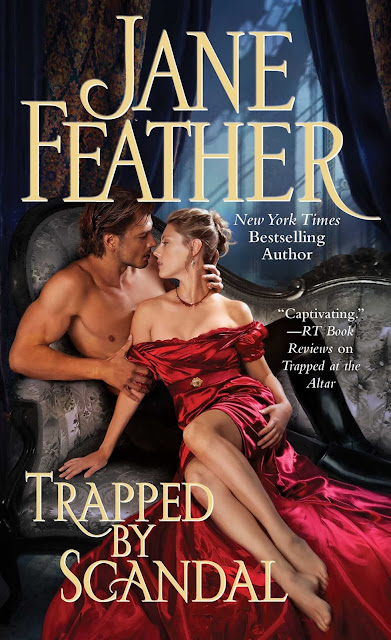 New York Times bestselling author Jane Feather returns to the Regency with a passionate tale that sweeps the reader from the dangerous streets of Paris to the glittering ballrooms of London. Will delight fans of Stephanie Laurens, Julia Quinn, Eloisa James and Mary Balogh.

A dangerously passionate affair... Lady Hero Fanshawe has chafed at society's rules since the death of her fiancé taught her that joy can be fleeting. When her brother disappears in Paris at the height of the Terror, she doesn't hesitate in risking her life to find him, joining forces with the enigmatic and dangerously handsome William Ducasse, Viscount St. Aubrey - a partnership which leads to an illicit liaison...

Half French, half English, William is committed to his shadow life, flirting with death to rescue imperilled aristocrats from the guillotine. Marriage is an indulgence he cannot afford. Once Hero returns to London, he refuses to risk her good name by continuing their affair. But he has reckoned without the determined Hero's disregard for propriety...or the dictates of his own heart.

Love the entrancing historical romances of Jane Feather? Don't miss the seductive Trapped at the Altar.

Regency at its finest…

Lady Hero Fanshawe is not a stranger to loss. When her brother goes missing she is determined to not lose another loved one if there is any way she can stop it. Embracing her adventurous nature, Hero heads to France.

William Ducasse is a Viscount but his true vocation lies as an agent for good amongst the turmoil of Post-Revolution Paris. Allied in a common goal, the two work together and become incredibly close as they wade through danger situations.

Things don’t always work out the way they should though, despite love, so will William push Hero away one too many times before they get the opportunity to fix things?

I love the new style of regency romance, where society restrictions are still in place but not the focal point of the story. Characters are ably living in the period but there is so much more to them than polite facades and pecks on the cheek. Regency-era men and women were sometimes evil, oftentimes good, and they loved sex just the same as those who came after them.

Hero embodies so many traits that make up a heroine – strong, straight-forward, practical yet loving, protective and headstrong as well. William seemed an intriguing blend of alpha male who forged his own path while still not willing buck society’s protocol completely. Throw in a wonderful writing style, crisp narrative and a little girl who is cute as a button, and you have all the makings of another book to add to the “re-read” stack. Book two in a series, this title can be also read as a standalone.
~ Review by Diane

Jane Feather is the New York Times bestselling author of more than thirty sensual historical romances, including the Blackwater Bride series. She was born in Cairo, Egypt, and grew up in the south of England. She currently lives in Washington, DC, with her family. There are more than 10 million copies of her books in print.