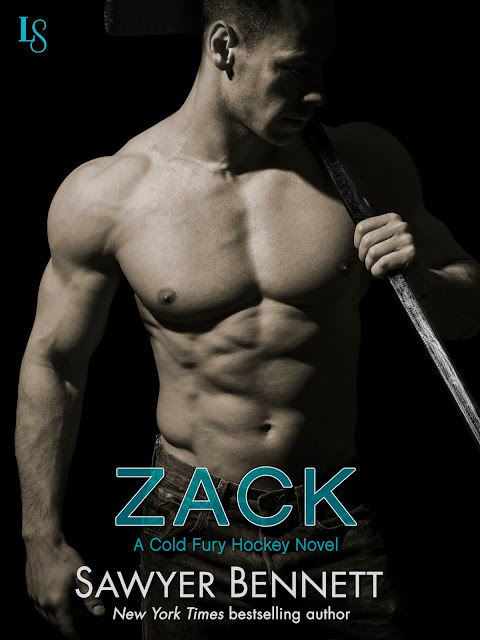 New York Times bestselling author Sawyer Bennett goes for a hat trick with the latest romance in a sexy series about cool-as-ice hockey players and the women heating up their lives.

Rising star Zack Grantham has been stuck in a downward spiral of grief ever since the car accident that left him a single dad and put his career on hold. Back on the road with the Carolina Cold Fury and still crippled by emotional baggage, he’s in need of some serious help with his son. But while the nerdy new nanny wins his son’s heart, Zack isn’t sure he’s ready for a woman’s touch—even after getting a glimpse of the killer curves she’s hiding under those baggy clothes.

Kate Francis usually keeps men like Zack at a distance. Though his athlete’s body is honed to perfection, he refuses to move on with his life—and besides, he’s her boss. Still, the sparks between them are undeniable, tempting Kate to turn their professional relationship into a personal one. But before she makes a power play for Zack’s wounded heart, Kate will have to open him up again and show him that love is worth the fight. 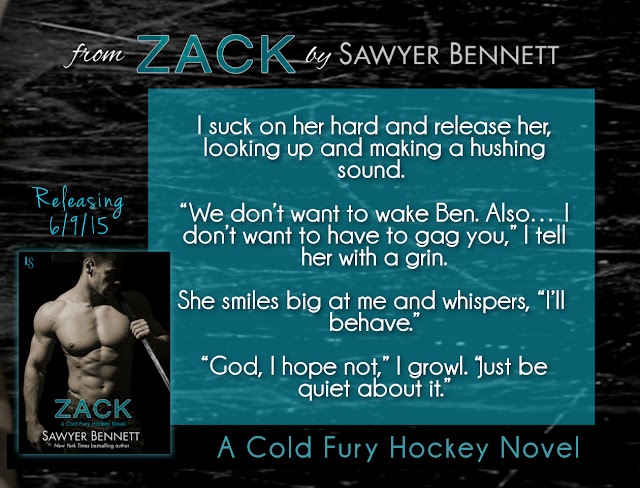 Zack might be the book I have thought the most about in the hours after I finished it since, well, ever. Because I needed to process it, needed to consider all sides, and needed to accept the way things started off and ended up.

Zack Grantham was left broken and grief-stricken after a car accident stole his girlfriend, the mother of his child, from him. Desperately in need of something to prove he can still feel, Zack works to get back to the thing he loves most aside from his young son…the ice.

To do that, he’s going to need help with his boy, and help comes in the form of Kate Francis. Kate’s a bit of a dork, prone to hiding beneath baggy clothes and behind nerdy glasses, and Zack doesn’t really take to the chipper caretaker at first.

Soon enough though, their attraction can’t be denied. But Zack’s already lost so much. Can Kate help him open himself up again, and prove that love, in all its forms, is worth fighting for?

So, here’s the thing. I finished this book at a little bit of a loss. I ached, and I mean ached for Gina, who readers of the first two books in this series will have met before, and all the things she lost. I felt protective of her and her memory, which may have been a little silly since she’s fictional, but regardless, it hurt to think of what she was missing. And that lead me to wonder about Zack and Kate. Don’t get me wrong, I loved this couple. I thought their connection was strong and I felt passionate about seeing them both find a well-deserved HEA. But I was conflicted… Was it all happening in a disrespectful way?

No. Like I said, I thought long and hard about this book. I thought about what I expected, based on my knowledge of Zack and Gina from Alex and Garrett, and then I considered what was written on the page. It’s all there, between the lines. In this nuanced and highly emotional story, Sawyer Bennett said everything I wanted and needed her to say, but she didn’t force it on me. She layered it into the story, showing that grief and guilt can, and sadly do, go hand-in-hand, proving that moving on and accepting the past while embracing the future doesn’t make you heartless. There is no timetable for grief, and there is nothing anyone can say or do to assuage your guilt, regardless of the circumstances, until you are ready to hear them. Time is what I needed to process this, and it’s what Zack needed too.

Zack was a very different reading experience for me, when it comes to Ms. Bennett’s books. The same snappy style is still there, and there were moments of levity which broke up the exceptional depiction of guilt that I had me swallowing back the lump in my throat. But these words didn’t grip me and make me fawn over them the way her previous works have done. No, these words made me take stock. They made me think about how love can look different from the outside, can feel different for different people and can still be a true love with being true love. These words leached into me without my even realizing it, until I had no choice but to think, to really think about what I’d read, and how and why I was reacting to it. And, damn it, when I figured it all out and ordered my thoughts, I discovered what I had known all along, but needed to reconcile… I loved Zack. Every. Single. Word. I’m giving this one 5 Guilt-Free Stars, plus one for every moment I thought about it, long after I turned off my Kindle.
~ Review by Beth

Wow! I knew this book was going to be a doozy after the way that Garrett ended, but I didn’t quite expect to have my heart ripped out. I haven’t ugly-cried like I did while reading this book in a long time. And I LOVED every minute of it!

Zack was in a horrible car accident, and lost his girlfriend and mother of his son, Gina. We got to see Zack carry and work through a lot of guilt. He is an amazing hockey player and a fabulous dad, but he was also an asshole most of the time.

Enter Kate. She is hired by Zack’s sister to be Ben’s nanny. She is sweet, smart, loving, and a dork. She is also hilarious and bluntly honest.

I absolutely adored her!

For the first time in months, Zack finally begins to feel something again. But he can’t act on it; Kate is Ben’s nanny and his son is more important.

“What in the hell is wrong with me? Lusting after Ben’s nanny? Craving just a slight touch to her face? Getting a hard-on from the barest graze of tits against me?”

However, he just can’t stay away and the two enter into a physical-only relationship. The two of them together are just fantastic. Kate isn’t afraid to call Zack out on his bullshit and of course, the lines start to blur and boundaries are crossed. Their attraction is undeniable and hot!

“I’m hard as a fucking rock for you right now. Trust me, I will not be turned off by your underwear.”

We got to see so much of the rest of the Cold Fury Hockey crew and I absolutely loved that Sutton and Kate became friends. I cannot wait for Ryker’s story!

Usually when I finish a book, I immediately sit down to write my review. This time I couldn’t. I had to get my emotions in check. I thought about this book for hours and days after finishing it. It was such an emotional, sexy, fun read and I seriously don’t think Sawyer can get any better.
~ Review by Tiffany

Holy Sweet Jesus on a pogo stick! Sawyer Bennett could probably write a dictionary and I would devour it in one sitting, then fangirl about it for days afterward. To say that I love the Cold Fury Hockey series is putting it lightly. These stories are intense, sexy, and emotionally gripping. I know once I pick one of these up, I’m essentially going to abandon my family until I have finished the book because there’s no turning back once you dig in.

Zack. Beautiful, sweet, damaged, confused Zack. I wanted to hug Zack and punch Zack and shake some sense into Zack, and do sinful, dirty things with Zack at various points in this book. After losing his long term girlfriend (and mother of his child) in an accident, Zack is mired in grief and confusion and trying to claw his way out of it tooth and nail.

Enter Kate. Kate is adorkable – completely unfashionable, without a censor, and not even remotely afraid to make an ass out of herself for a smile. Kate is hired as nanny to Zack’s son, Ben. What starts as a begrudging friendship between these two, eventually catches fire and grows from there.

There’s a lot of healing going on in this book. Zack throws a lot of bullshit at Kate while he works through the demons in his own mind, and comes to term with his past, the accident, and allowing himself to move on. Kate is some sort of saint for putting up with and agreeing to a lot of the things she agrees to.

My heart swelled, and then broke, and then Ms. Bennett patched it all back up and left it floating somewhere between *swoon* and, well, to use Zack’s own words, “sweet, fucking, merciful Zeus.” I mean, Lord Almighty, but Ms. Bennett knows how to write a sex scene. Even when I wasn’t fully on board the Kate/Zack train, I was panting at my Kindle watching their chemistry flare.

I am fully on board the Kate/Zack train now. I laughed, I cried, my heart exploded. I loved the everloving crap out of this book.
~ Review by Shelly 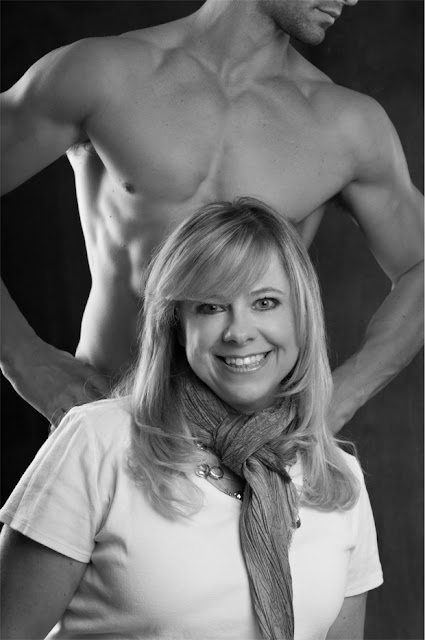