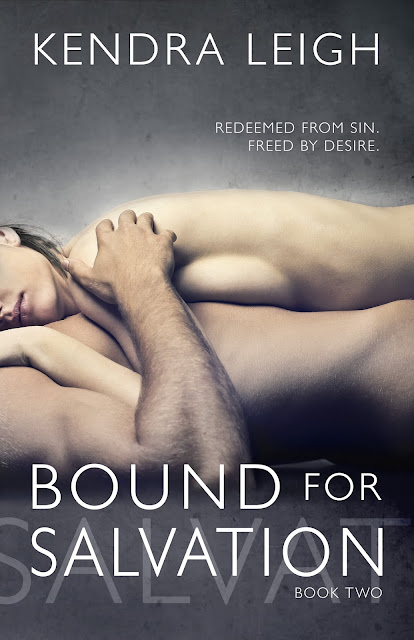 Hell was hot, but the flames of deliverance might be the ones to burn …

Ethan Wilde has taught her that love is possible for all, even the sinners among us. The bonds of his love free her from the shackles of her guilt. Inch by inch, he’s slid under her skin, folding himself around her soul like a soothing blanket. His love nourishes her starving heart, and his passion fuels the scorching flames of her deepest desires, driving her to the blissful edge of sweet insanity.

Brick by brick, she tears down the protective wall she’s built around her heart, and the ice inside begins to thaw.

To Ethan, Angel is the sole reason he exists, the blood in his veins, the drug to his addiction. He vows to mend her, to help her confront her demons and come to terms with a buried past that continues to haunt her.

But what lies beneath the surface of Ethan’s past?

And secrets have a habit of revealing themselves when least expected ...

Ethan paused at the foot of the steps to be sure I was shadowing him, and with one hand in his pocket, casually ascended the stairs. I followed at a distance, the way he’d followed me on the first night we met, and as I reached the summit, I caught sight of him disappearing into a room at the end of a wide corridor. The noise from the music and chatter faded into a distant hum as I made my way down the hall, my heart hammering rhythmically against my chest as excitement built up inside me, just as it had that night. The door to the room stood slightly ajar and tentatively, I reached out to push it open.

The room was in darkness, but the brightness from the hallway cast a muted light into the room, enough so that I could just make out a large, silver, Las Vegas pool table. It was a games room. Suddenly, the chrome lights above the table flicked on, drawing my attention to the high quality, smooth, black cloth covering the table. Wilde was scrawled in gray writing across the middle. The rest of the room remained in the shadows.

I entered the room slowly, a quick glimpse revealing, among other things, a foosball table, a pinball machine, and several vintage arcade games. A proper boys-with-toys room. I couldn’t see Ethan, but his presence was indisputable, like an electrical force field charging the space around me, exerting his force without any tangible contact.

Behind me, I heard the sound of the door closing, the key turning in the lock. A combination of apprehension and exhilaration sped through me, a shiver chasing a trail up and down my spine, continuing down and under to my naked, clenching sex.

Suddenly, there was a noise from behind me, somewhere to the left in the corner of the room. The sound of a dime being pushed into a coin slot and the whirring of mechanics—a jukebox. I didn’t turn around. Ethan’s imprecise location, the unfamiliar surroundings, the uncertainty of what was about to happen, all seemed to exacerbate my arousal beyond reason, and everything south of my navel began to pulse. 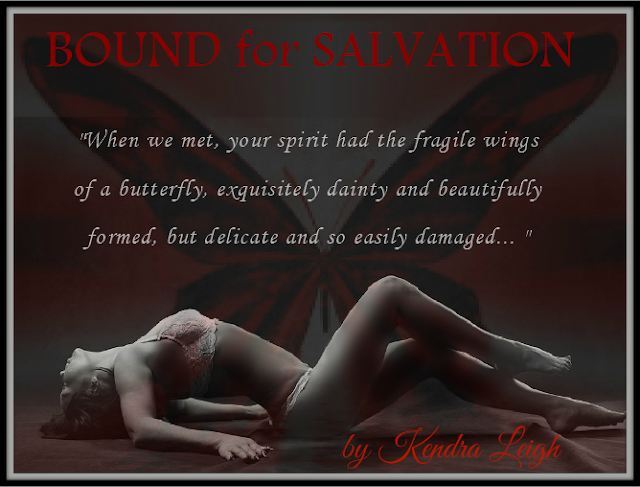 This is the second installment in this series, and I must say I liked it even more than the first one. The things that were iffy for me in the first book were resolved in Bound for Salvation, and made it so much more.

Angel, while suffering from her personal demons, is stronger than ever in this book. She doesn't take any crap from Ethan, and although it breaks her heart to do so, she doesn't just sit around and become a doormat. We learn more about Ethan's sketchy past, which, while dramatic, made this book quite hard to put down! And we get to spend more time with Jackson, who is a fabulous character all on his own.

I loved spending more time with Ethan's family; they're impossible not to love. I loved the suspenseful turns it took, and the dramatic reveal of the truth. As much as it hurt, I loved reading about Ethan's anguish and heartbreak, showing us a few cracks in his frequently icy facade. I can't wait to read about Angel tackling her demons in the next installment, and see where this couple is headed.
~ Review by George 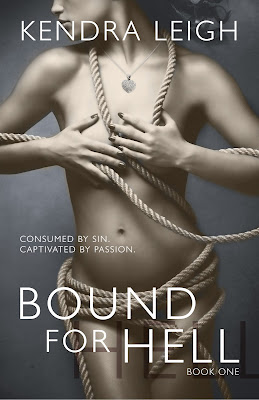 When I first started reading Bound for Hell, it didn't immediately capture my attention and I was thinking it would only be a four star read. Yeah, that lasted until I got like ten percent into the book and then something happened that just completely sucked me in, made my heart ache, made me feel helpless, and made me seethe with rage. It changed my view point of this book and that moment, and every one after it, made the story worthy of five stars. I absolutely loved this amazing book!

Ethan Wilde, as if his name wasn't sexy enough already, is just utterly irresistible! He's rich, gorgeous, caring, protective, dominant, and possessive. And as if that wasn't enough already--he's American, but he has an English accent!!! You get the best of both worlds with Ethan Wilde: on one hand you have the passionate, shows-and-expresses-his-emotions American and on the other you have the sexy accent! He's so much more than just his accent, good looks, and wealth though; he is just so wonderful with Angel and he had me swooning a lot! I loved the man--he's d*mn near perfect--but oh, that man made me angry because he is hiding something and it's going to blow up in his face when whatever he's hiding is revealed. I'm sure he'll be sweeping you off your feet though when you meet him!

Angel Lawson. What can say about Angel Lawson except my heart just completely broke for her? Her past, and even sometimes her present, tore me up. She's been through so much that she didn't need to and it just makes me furious and want to seriously smack some sense into certain characters. It's not hard to see why Ethan fell for her or why she inspires the urge to protect in other people. Angel is kind and sweet and the last thing she wants to do is hurt someone. She tries to be positive and see the good in people even when it's not always wise. I'm not blind to fact that she has some serious issues that she needs deal with before the end of this trilogy, but I still loved her character.

Bound for Hell is full of beauty, heartache, laughter, tears, secrets, lies, and sex! Really, really HOT sex!! It's going to take you on wild, mysterious, danger-and-heat filled ride, so brace yourself! It's just an excellent book and I loved it!

Bound for Hell is only told from Angel's point of view and there are still many questions that I can't wait to have answered, but also am little anxious to learn about in Bound for Salvation!
~ Review by Paige

I flowed through this book on waves of highs and lows. The highs were wonderful! A random, passionate fling in a store room. So hot! A sexy as hell rich man with an English accent. Perfection! A woman who is strong willed and talks back. Sassy! I loved the relationship Ethan and Angel developed, it was beautiful and strong and oh-my-god sexy.

The backdrop of characters had a huge impact on the highs of this story. Jackson, Ethan's dependable right hand man. Loved him! Jia, Angel’s best friend, adored her! Even Angel's family was well written, and I hated them so much for the way they treated her.

The downs for me were scattered through the book, and just kept me from riding high the whole way. Ethan is so possessive, and while Angel talks back and appears feisty, she just lets him steamroll over her. The ‘instalove’ is always a little difficult to deal with, especially from characters who swear they don't commit. Then the jealousy level between them was off the charts, and a little annoying to deal with. It's difficult to fully trust a love that doesn't have mutual respect and trust.

Overall it was well worth the ride, however, and I turned straight to book two so that I could see what happens next.
~ Review by George 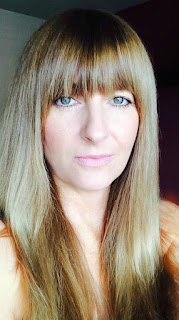 Kendra Leigh fell in love with books and the wonderful world of reading from a very young age. She was at her happiest when Enid Blyton whisked her away up into the magical lands at the top of the Faraway Tree with Moon-face and the rest of the gang. Books have been her constant source of escapism ever since. Currently residing in the UK, Kendra devotes her life to her devilishly handsome partner, scandalously beautiful daughter and cute as hell Shih-Tzu. As well as writing and reading, Kendra loves great TV, especially Dexter, Homeland and Breaking Bad. Bound for Hell was her debut novel and book one of The Bound Trilogy. Bound For Nirvana will follow Bound For Salvation and conclude the series.