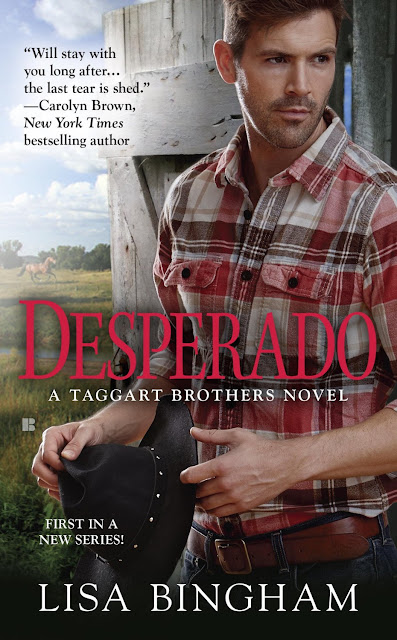 From bestselling author Lisa Bingham comes the first in a brand-new series starring a trio of handsome wranglers. The Taggart brothers have bodies of iron and hearts of gold—though both may be a shade tarnished. But that doesn’t stop them from trying to keep the women they love in their arms...

Elam Taggart knows about the nickname town gossips have given him: Desperado. He doesn’t care. He’s lost just about everything: his wife, his parents, his little sister, and his career as a Navy EOD specialist. After returning home, he hightails it to the rugged Wasatch Mountains outside town.

But when his brother comes asking for help, Elam can’t say no. That is, until Elam realizes that in order to help, he’ll be forced to spend time with town newcomer P.D. Raines. P.D. knows that asking Elam Taggart to be her partner in the town’s upcoming Wild West Games is a mistake. But she needs the prize money, and Elam is lean, hard, and tortured—a dangerous combination she can’t seem to resist.

As the competition heats up—to the point of peril—Elam and P.D. have to turn away from the past and embrace the passion that sparks between them in order to escape the threat to their lives.

I will admit that cowboys make me weak. What’s not to love about sexy, strong, good-with-a-rope, mesmerizing cowboys? I have to mention that because Elam Taggart is all this and more.

Reeling from losing so much he holds dear, including his beloved wife, Elam was back home from his military stint and trying to get through the days building what should have been their dream home. Keeping himself aloof allows him to keep it together as he struggles to overcome his grief.

P.D. Raines, however, was going to sneak under his defenses. Unlike the Taggarts, who are steeped in home and hearth, she hadn’t had the conventional, supportive upbringing she had longed for. Determined to win the Wild West Games contest, she was going to keep moving forward despite the obstacles. And that included a reluctant Elam.

“What does P.D. stand for?” Elam asked. He spoke softly, but the rumble of his voice could have carried yards.

She cleared her throat before admitting, “Prairie Dawn.” She thought she saw the slightest lift to his eyebrows – as if she’d surprised him yet again.

P.D. grimaced. “Says the man who wasn’t named after a Muppet.”

Elam is hurting and Prairie Dawn is just the refreshing dose of reality he needs to wake up and realize there is more to life than just existing. The contest was a wonderful way to see them come together to learn more about, and rely on, each other, and to build on the attraction they both feel.

This is the first in a series and, like firsts often can, they slowly set the stage for the books to come. The Taggart brothers are definitely worth more face time as each are attractive in their own unique way.

Funny and touching, I loved the warmth of this story and the characters in it. The feel of the Wild West with some modern shenanigans thrown in for good measure makes this an instant addition to my “go to re-read” shelf.
~ Review by Diane

This book was such a fun ride and just what I needed!

Elam Taggart is a contemporary cowboy, and everything sexy all rolled into one perfect package. He begins dark and brooding, still recovering from his wife's untimely death. Elam has been hiding out from the world at the cabin he's building, trying to cope with his injuries from the Navy and the loss of not only his wife, but his parents and sister as well. He is approached by his brother Brodey to take his place in the Wild West Games, a sort of Wild West Amazing Race, where Brodey had signed on with his friend, P.D. Raines.

The attraction between these two is immediate and electric. Neither of them tries very hard to deny it, even in the beginning, and P.D. does her share of the initiating. I love a go getting woman! Usually I'm screaming at the book, “Just kiss him already!” and P.D. does!

Elam has had his share of sorrow, but he doesn't spend the entire book moping over it. I also really loved this. He's honest about his love for his first wife, but accepting of the fact that he is allowed to move on eventually. His family is wonderful, and if there are going to be books coming up about his brothers, I can't wait to read them.

I couldn't believe what a wonderful idea the Wild West Games were! The entire process was clever and fun to read about; a nonstop romp for the main characters and just plain creative on the author's part. Loved this! The background mystery is enough to bring out Elam's protective side, and P.D.'s needy side, which was also well done; I loved Elam's responses and how he didn't take the dark, brooding road that so many other authors choose for their heroes.

The only thing that brought this down to a 4 star instead of a 5 star for me is that P.D. constantly puts herself down. She can't believe she is beautiful; she can't be small and delicate like his first wife. He can't love her because she's not pretty enough, not feminine enough. He won't want to stay with a girl like her. This didn't mesh for me with the strong, go-getting woman that kissed him first, and kicked ass in those tough games. These insecurities came up so often that I found it too annoying to give this one a full 5 stars.

Overall though, this was a hard to put down read, I found it sexy-as-hell, clever and fun, and I can't wait to read the next in this new series.
~ Review by George 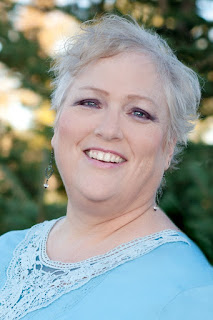 Lisa Bingham is the bestselling author of more than two dozen historical and contemporary romantic fiction novels including Silken Dreams, Silken Promises, and Temptation’s Kiss. With more than 1.5 million copies in print, she believes that writing is as necessary to her as breathing. Besides her writing, Lisa is also a teacher at a middle school in northern Utah. In addition, she’s been a professional costume designer for more than twenty years for theatrical and reenactment attire, and is considered an expert in the field. She has been lucky enough to live and study in such exotic locales as Brazil, Mexico, Europe, and the United Kingdom. Presently, she lives near their four generation–operated farm in northern Utah with her husband, three children, an over-protective dog, a burr-laden cat, and a miniature goat who thinks she’s a puppy.