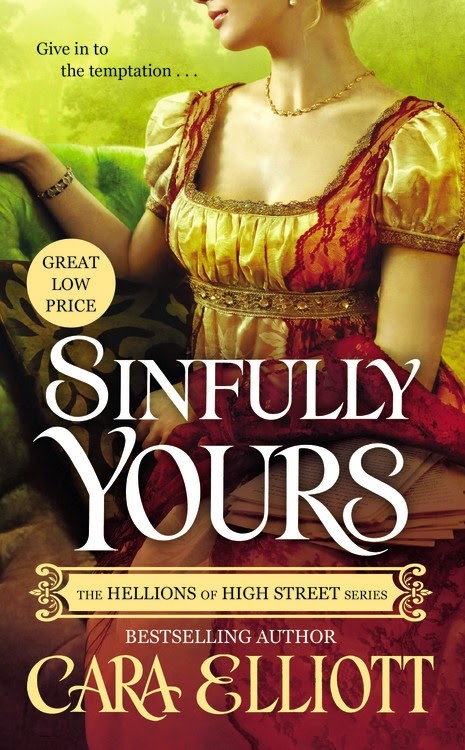 After an eventful Season, Anna Sloane longs for some peace and quiet to pursue her writing. Though her plots might be full of harrowing adventure and heated passion, she'd much prefer to leave such exploits on the page rather than experience them in real life. Or so she thinks until she encounters the darkly dissolute-and gorgeously charming-Marquess of Davenport.

Davenport has a reputation as a notorious rake whose only forte is wanton seduction. However the real reason he's a guest at the same remote Scottish castle has nothing to do with Anna . . . until a series of mysterious threats leave him no choice but to turn to her for help in stopping a dangerous conspiracy. As desire erupts between them, Davenport soon learns he's not the only one using a carefully crafted image to hide his true talents. And he's more than ready to show Anna that sometimes reality can be even better than her wildest imaginings . . .

If you haven't read the first book in this series, Scandalously Yours, then you'll be okay, technically. This could be read as a standalone. But since that book was so great, and gives us a great introduction to this family and its eccentricities, I highly recommend you read it first.

Sinfully Yours brings us around to the middle sister, Anna. Known as the “Hellions of High Street”, Anna and her sisters are not the conventional women of their time. Educated, adventurous, and capable, they are not women who cow down meekly to the men in their lives. Anna has always seemed to be the “proper” sister. Pretty and sweet, she appears to be the perfect society maiden. She is hiding a huge secret, as the writer of dashing and romantic novels. In society, she finds herself clashing constantly with a man know as Devlin “the Devil”…

We got to see snippets of the relationship between Devlin and Anna in the last book, so it was no surprise that these two were going to have hot sparks flying between them. Anna may be a virgin, but there is nothing cowering or timid about her, and she knows how to take what she wants! Trying to emulate the heroine of her novels, she finds herself thrown into a political assassination plot, mystery, scandal, and all the adventure she could want. And did I mention passion? Hot sexy passion? Cause there's that. The question is, can Anna reform the Devil, or does she even want to? I also loved getting to know the younger sister better. She is growing out of the left out school girl, and into a woman of her own. This book was just as fun as the first, and I can't get enough of this family!

Cara Elliott started writing Western novels at the age of five. Later she changed her genre to Regency romance after reading Pride and Prejudice. She graduated from Yale University, and she now lives and works in New York City.

a Rafflecopter giveaway
Posted by Give Me Books at 12:11 pm