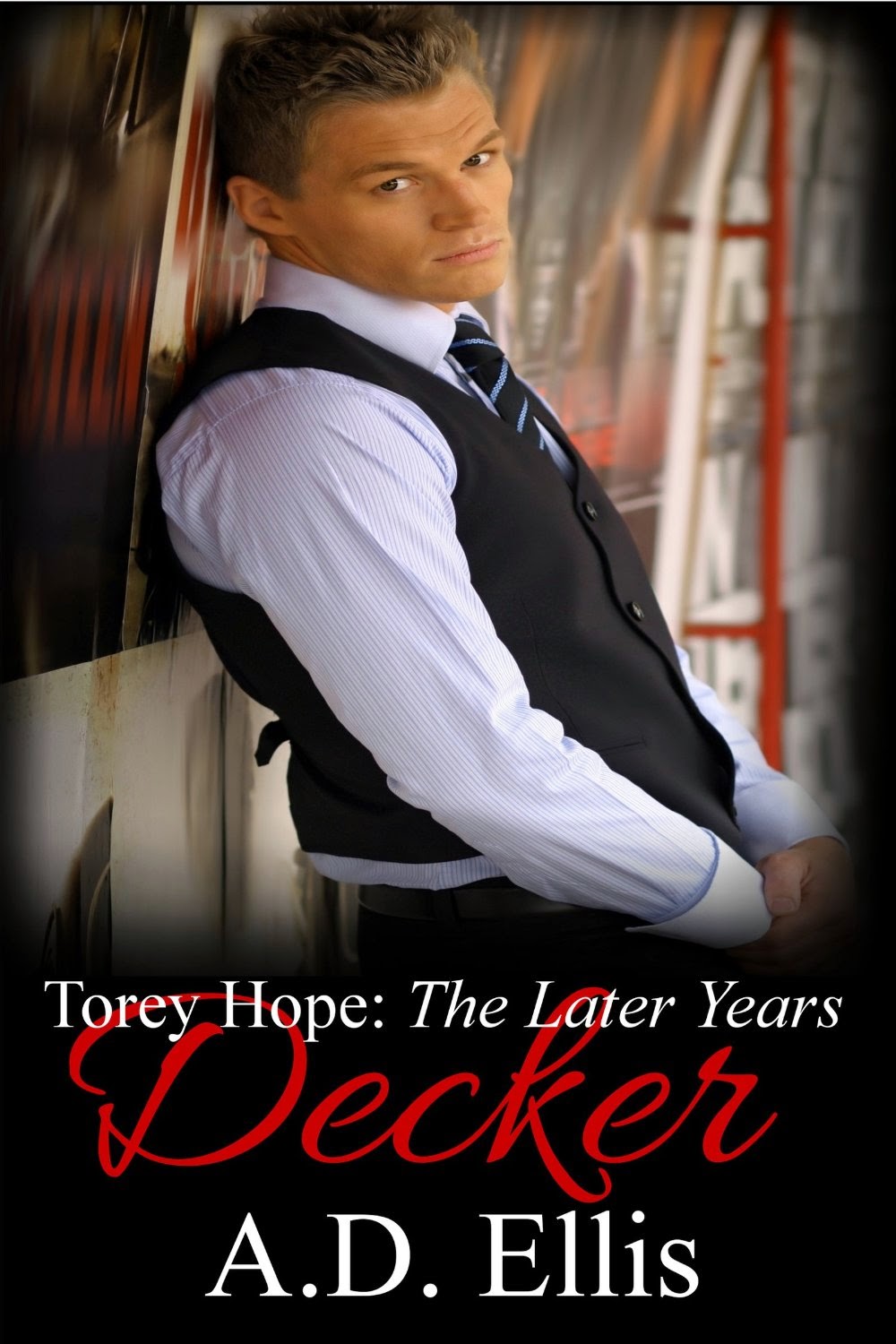 The boys are back, and Torey Hope is better than ever.

When Decker Morgan returns to Torey Hope, he has no time for love and distractions. Always in control, his loyalties lie with himself and his family. His only interest is putting down roots and expanding his family’s business.

Kate Turner had planned to leave Torey Hope after college, but she found that being there for her family took precedence. When she lands her dream job working for Decker at his family’s business, The Center+, she realizes that Torey Hope is where she’s supposed to be.

When Decker hires Kate she turns his world upside down. She’s brilliant, funny, beautiful, and completely off limits, due to Decker’s self-imposed rules concerning work and family. Kate knows a secret that will make their attraction for one another a little less taboo, but she needs to convince Decker to take a chance.

Decker has to decide if he’ll give in to a forbidden romance or keep his tight control firmly in hand. Kate is possibly his perfect girl, but unexpected chaos and havoc at work threaten to tear her away.

Will he find the courage to let go or will he lose the only girl he’s ever wanted to keep close?


**This is a contemporary romance with suspenseful elements intended for readers age 18+ due to mature language, sexual situations, and violence. While there are no male/male sex scenes in this story, there are some detailed descriptions of male/male relationships.**

This tells the story of all the kids from the original Torey Hope series (mainly of Decker, the oldest of them) and what becomes of them as they live their lives.

Graduation has come and Decker, his twin brother and cousins have decided to move back to Torey Hope to continue working on the The Center. They’re going to need help so the "Now Hiring" ads are put out, and little does Decker realize that someone from his brother's past will become someone important in his life.

When this couple came together and worked together, I could feel the sexual tension building, not knowing when it was going to burn up my tablet. When they finally give in, they think they are in the clear until someone starts to harass them wanting to break them up… A.D. Ellis did an excellent job keeping under wraps who it was, and I have to say, that individual belongs in the loony bin! 4 Sweet, Sexy Stars.

She was born and raised in a small farming town in southern Indiana. An avid reader from the time she learned to read, A.D. could often be found curled up somewhere with her nose in a book. Most of her friends were not such book enthusiasts which earned her a few snickers when she was constantly reading.

A.D. had always dreamed of being a teacher. She earned her degree in Elementary Education from Indiana State University in 1999 and her Master’s Degree from Indiana Wesleyan in 2003. A.D. has been teaching in the inner city of Indianapolis for 15 years. While she’s taught several different grades, fourth grade is her favorite. They are learning independence by 4th grade, but most haven’t learned the attitude yet. A.D. loves teaching fractions, variables, probability, and graphing in Math. She loves almost all aspects of English Language Arts. Figurative language, theme, making predictions, drawing conclusions, inference, context clues, making writing come to life, A.D. loves it all! Her students may not be in agreement with that excitement.

A.D. met her husband in college in 1996 and they married in June of 2000. A.D. lives in a south side suburb of Indianapolis, Indiana with her husband and two school-aged children. When she’s not reading or writing with music blaring, she can be found shopping at thrift stores, reading to her children, and running.
A.D. had always pondered the idea of writing a book, but until recently it was a far off dream. In today’s age of independently published authors, A.D. decided to take a chance and try her hand at writing. She has learned so much during this journey and is having a world of fun with it.